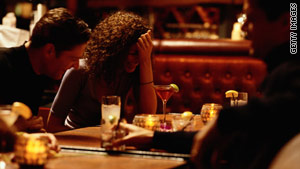 Women have a stronger influence on their friends' drinking habits than men do, a new study says.
STORY HIGHLIGHTS
RELATED TOPICS

(Health.com) -- If a friend or relative starts drinking more heavily--or decides to drink less or give up alcohol entirely--you're more likely to do the same, according to a new study that found heavy drinkers, moderate drinkers, and teetotalers tend to cluster within social networks.

People don't give up bad habits because they think, "Oh, this is bad, I shouldn't do it," says Dr. Tim Naimi, M.D., a physician at Boston Medical Center who studies the public health aspects of alcohol but wasn't involved in the new study. "It's largely because they feel their friends and neighbors will look down on them."

The closer the social connection, the greater the influence one person's drinking had on another's, the researchers found.

The pattern worked in reverse, too, although it wasn't as pronounced. People with a friend or relative who didn't drink were 29 percent more likely to be teetotalers themselves.

The quantity of relationships mattered as well. The more connections to drinkers--or nondrinkers--a person had, the more powerful the effect was. People "surrounded by" heavy drinkers were 70 percent more likely to drink heavily themselves, while those with many abstinent friends and relatives were 50 percent more likely to also abstain, according to the study.

When it comes to drinking, friends and family members appear to have the biggest influence on us. The study found that the drinking habits of a person's co-workers or neighbors had no effect on their own alcohol use.

In the study, which was published this week in the Annals of Internal Medicine, the researchers followed about 12,000 men and women for more than 30 years. The participants--who listed their social contacts when they enrolled in the study in 1971, and at several points thereafter--are part of the Framingham Heart Study, a large longitudinal study that has examined heart disease risk factors in that Massachusetts town since 1948.

This is merely the latest study to show that our behavior and health are shaped by social networks. The same research team, led by Dr. Nicholas A. Christakis, M.D., a professor of medical sociology at Harvard Medical School, in Boston, has previously used data from the Framingham Heart Study to show that obesity, smoking, happiness, and even loneliness can spread through social connections--that, in effect, they're contagious.

The infectiousness of these behaviors has its limits, however. As with the other behaviors they have studied, Christakis and his colleagues found that influence over drinking habits doesn't extend beyond three degrees of separation.

Moreover, men whose wives started drinking heavily were three times more likely to start doing so themselves, while a woman whose husband began drinking a lot was only about twice as likely to join him.

The reason behind these gender differences isn't clear, although the fact that heavy drinking is less socially acceptable for women might be a factor, says one of the study authors, Dr. J. Niels Rosenquist, M.D., a research fellow in health-care policy at Harvard Medical School.

"You might notice more if a female friend starts drinking heavily," he says.

"There's a long tradition of examining group norm influences on individuals and health behaviors, but few studies have the extent of the data that this one is working with," says H. Wesley Perkins, Ph.D., a professor of sociology at Hobart and William Smith Colleges, in Geneva, New York. "This study takes us a lot further. It's great support for those of us working in the alcohol field who are emphasizing the strong influence of social and peer norms."

Perkins wasn't involved in the new study, but he has conducted similar research on the effect of peer behavior and attitudes on alcohol use in teenagers and young adults. For instance, he has shown that heavy drinkers tend to think that everyone else drinks a lot too, and that when alcohol abusers learn about their peers' real drinking behavior, they tend to moderate their own drinking.

"Although we have always considered the roles of peers, families, and neighbors in all risk behaviors, including alcohol use, researchers like me have not done an adequate job of developing effective interventions to change social networks," says Scott Rhodes, Ph.D., a public health scientist at Wake Forest University School of Medicine, in Winston-Salem, North Carolina.

"We must move beyond the individual," he adds.