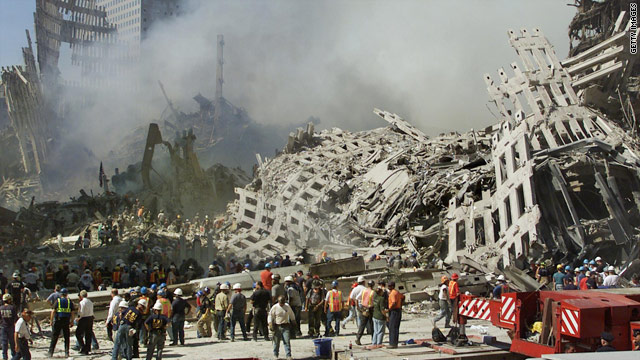 Rescue workers searched in the smokes from the rubble of the World Trade Center in September 2001.
STORY HIGHLIGHTS
RELATED TOPICS

(Health.com) -- When the twin towers of the World Trade Center collapsed on Sept. 11, 2001, they produced a dense cloud of smoke and vaporized concrete and drywall.

New York City Fire Department rescue workers who were exposed to this polluted air -- as well as the kicked-up dust and diesel exhaust that accompanied the rescue effort -- had reduced lung function in the weeks and months following the attacks, researchers in New York found at the time.

Now, in a new study in the New England Journal of Medicine, the same researchers report that the lung impairment they observed in the rescue workers appears to be lasting. Firefighters and emergency medical personnel continued to have decreased lung function up to seven years after 9/11, the study found.

"This group has suffered real declines that need to be addressed with regular monitoring and aggressive treatment, because they are now at higher risk for developing future lung problems," says the senior author of the study, Dr. David J. Prezant, the chief medical officer of the New York City Fire Department and a professor of pulmonary medicine at the Albert Einstein College of Medicine, in the Bronx. "We confirmed that the drop in lung function that occurred during that first year was substantial, and for the first time we showed that this drop is persistent."

In 2001 and 2002, Prezant and his colleagues measured the lung function of more than 12,000 fire department rescue workers who worked at Ground Zero, comparing the results with lung-function tests given to the same group before 9/11 as part of their routine department physicals. On average, the lung function of the workers at the World Trade Center site declined by an amount equivalent to 12 years of natural aging, they found.

In the new study, the researchers continued to follow these firefighters and medical personnel for an average of six years, measuring their lung function every 12 to 18 months to see if the initial decline persisted. (Lung function was measured using spirometry, which involves blowing into a device that records the amount of air you exhale.)

The researchers were surprised to see "little or no" improvement in average lung function, according to the study.

In addition to raising the rescue workers' risk of future lung problems, this persistent decline in lung function has potential short-term consequences, according to Prezant. "It places them at a higher risk for shortness of breath, cough, wheeze, [and] impairments in their ability to exercise and perform physically demanding jobs," he says.

Lung function declined regardless of whether the study participants had ever smoked, although people who smoke (or used to) did show a slightly steeper decline in their lung function than their nonsmoking counterparts, the study showed. "There is a slight additional impact from smoking, but a post-9/11 aggressive tobacco cessation helped cut smoking rates among these firefighters," says Prezant.

Dr. Neil Schachter, a professor of pulmonary medicine at Mount Sinai Medical Center, in New York City, says the findings confirm the respiratory effects that have been attributed to the air at the World Trade Center site.

"You didn't have to be sick to be affected by the dust at Ground Zero," he says. "The toxic, irritant fumes caused a sudden and relatively dramatic decline in lung function among healthy first responders. There was a significant effect of the exposure in this group of otherwise healthy individuals."

The decline in lung function observed in the study "was not insignificant for a one-shot deal," Schachter adds. Everyone's lung function declines as they age, but this decline gives the exposed rescue workers a head start and "they may become impaired at an earlier age as a result," he says.

Whether the firefighters and other rescue workers at Ground Zero do, in fact, develop future lung problems as a result of their exposure is certain to be followed closely -- by lawyers as well as by doctors and researchers.

The purported connection between post-9/11 dust exposure and chronic diseases and conditions has been controversial, and some observers have challenged the research linking work at Ground Zero to respiratory symptoms such as shortness of breath, wheezing, and what came to be known as "World Trade Center cough."

Considerable financial interests are at stake in the debate. Last month, New York City officials reached a settlement of up to $657.5 million with some 10,000 firefighters, police officers, construction workers, and other responders who claimed that they developed chronic conditions such as asthma after being exposed to Ground Zero dust. (A week later, however, a federal judge objected to the terms of the settlement and said it would be renegotiated.)

Unlike subjective reports of symptoms, Prezant says, the lung function reported in the new study provides an objective measure of the respiratory impact of Ground Zero exposure. "This study clearly shows in a non-biased and scientific way that the findings in firefighters and [emergency medical] workers are real," he says.

The study did have some limitations. Prezant and his colleagues used the amount of time a firefighter spent at the World Trade Center site to estimate his or her exposure to dust, which is only a rough measure. Nor could they determine which workers wore protective masks, and for how long.

As a result of the study, Prezant says, the New York City Fire Department is going to be more aggressive about offering preventive treatment to firefighters who were at Ground Zero and who may be at risk for lung ailments. These efforts will include campaigns to vaccinate firefighters.