How crash diets harm your health 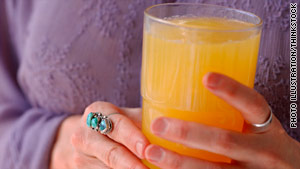 The Master Cleanse involves consuming a mixture of water, lemon juice, maple syrup, and cayenne pepper -- and nothing else -- for several days.
STORY HIGHLIGHTS
RELATED TOPICS

(Health.com) -- Linda Bacon, Ph.D, dreads swimsuit season, but not because she has anything against the beach.

Instead, the California-based nutritionist fears what the season brings: scores of otherwise health-conscious citizens who subject themselves to deprivation diets (like the Master Cleanse) or intense exercise regimens, often in blazing hot weather, to look slimmer in revealing clothes.

Many unwittingly end up harming their health -- and possibly even their hearts.

"Early June and January are the two times of year people do crazy, desperate things to get thin fast," says Bacon, a nutrition professor at the City College of San Francisco, California, and the author of "Health at Every Size: The Surprising Truth About Your Weight."

"They go on fasts, yo-yo diets, detox programs, and 'cleanses' without realizing that there are serious consequences to weight loss and nutrient restriction."

That crash dieting doesn't work and can be dangerous is a message that gets lost in the national clamor over rising rates of overweight and obesity.

Thinking of trying a lemonade fast or cabbage soup diet? Here's what to keep in mind if fitting into your skinny jeans or your Speedo is high on your summer agenda.

Crash diets may harm your heart

Cardiologist Isadore Rosenfeld, MD, a professor of clinical medicine at Weill Cornell Medical College, in New York City, and author of the forthcoming "Doctor of the Heart: A Life in Medicine," opposes crash diets (less than 1,200 calories a day) and detox plans like the Master Cleanse.

The Master Cleanse involves consuming a mixture of water, lemon juice, maple syrup, and cayenne pepper -- and nothing else -- for several days.

He says these very low-calorie regimens are based on the false theory that the body needs help eliminating waste.

Bacon adds that long-term calorie-cutting can eventually lead to heart muscle loss. "Yo-yo dieting can also damage your blood vessels. All that shrinking and growing causes micro tears that create a setup for atherosclerosis and other types of heart disease," she says.

Chip Stinchfield, a 55-year-old shop owner in New Canaan, Connecticut, has experienced the cardiac effects of dieting firsthand. On the advice of friends, he went on a Master Cleanse for days and exercised vigorously. Another time he ate nothing but cottage cheese, beets, and peanut butter. Both were "quick, easy fixes" that helped him drop up to 10 pounds fast.

But both diets also gave him shortness of breath, heart palpitations, and "the feeling like I was going to have a heart attack."

Under pressure from his family, who thought his dieting might disable or kill him -- like many extreme dieters, Stinchfield kept his doctor in the dark about his radical habits -- he eventually went back to sensible eating.

Experts have known for decades that extended crash diets can be dangerous -- especially when the diets become a fad.

In the late 1970s, an osteopath named Robert Linn published "The Last Chance Diet," a best seller that advocated a miraculous "liquid protein diet." Following the lead of their favorite celebrities, millions of people bought quarts of Dr. Linn's liquid formula and embraced the diet (or one of many copycat versions), averaging just 300 to 400 calories a day.

The diet seemed to work wonders -- some people reported losing as many as 10 pounds a week on the formula. But then the news of sudden deaths began to trickle in.

An investigation led by the Food and Drug Administration turned up nearly 60 deaths among liquid dieters. Although some of the deaths occurred in people with underlying diseases such as atherosclerosis (and therefore could have been coincidental), government researchers who examined otherwise healthy dieters who died of ventricular arrhythmias found that the pattern of deaths suggested "the effects of protein-calorie malnutrition on the heart," including atrophy of the heart muscle.

Experts have since tried to pinpoint the dangers of crash diets (technically known as "very low calorie" diets). Shortages of potassium, magnesium, and copper have been suggested as possible causes of the arrhythmias seen in crash dieters, and studies have also found that the diets can cause a drop in blood pressure and sodium depletion.

The true extent of the risk posed by crash diets is unclear, however. Much of the research has been conducted in obese people -- a population that can actually benefit from these extreme diets -- and in most studies the health of the participants is carefully monitored.

Experts stress that very-low-calorie diets should only be followed with a doctor's supervision. But crash dieters are more likely to consult their friends than a doctor -- which can get them into trouble.

Brooke Robertson, 23, learned these lessons the hard way. Last spring the Auckland, New Zealand, mom reportedly suffered a minor heart attack after she lost 100 pounds on a diet of Red Bull and the occasional fistful of dry cereal.

Despite the international publicity, Bacon doesn't think desperate dieters will consider Robertson a cautionary tale. "There's absolutely no benefit to fasting or detoxing," she says. "Extreme diets are simply bad for you and they don't work. But every year people engage in magical thinking."

How to lose weight -- safely

If you're overweight, slimming down is critical for your overall health. Even moderate weight loss can lower your risk of developing heart disease, diabetes, and some types of cancer.

But it's important to lose weight safely, which usually means slowly: Most experts recommend dropping just 1 to 2 pounds a week. And despite what some brand-name diets claim, the best way to do so is to exercise regularly and stick to a diet that limits saturated fat and sugars and emphasizes fruits and vegetables, lean meats and fish, and whole grains.

"The key to losing weight is a combination of diet and exercise," says Dr. Rosenfeld. "One alone will not do it."