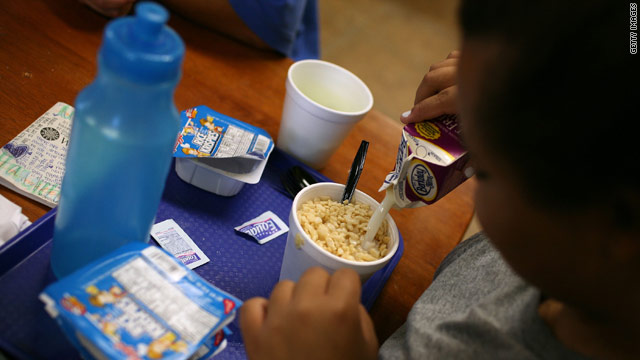 (Health.com) -- Desani Marshall was never really overweight, but she was always a little big for her age. During a checkup at age 4, her doctor pointed out to her mother that Desani was gaining weight more rapidly than he thought was normal. Six months later, she was still putting on pounds at a rapid pace -- a strong predictor of future obesity.

"I didn't take it seriously; I didn't think it was that bad," says Desani's mother, Caryl Marshall, of New York City. "But then he showed me the growth chart. At the rate she was gaining, what really made me take it more seriously was what the future could be."

Now 7, Desani is gaining weight at a normal pace, thanks in part to dietary changes, such as cutting out soda, that Marshall has implemented. "Everybody would look at her and say, 'She's so skinny. Why?'" Marshall says of her daughter's regimen.

In some ways, Desani's success story is an exception. Across the country, childhood obesity has only gotten worse. More than 20 years after it was first described as an epidemic, 17 percent of American children and adolescents are obese, triple the rate in 1980, and nearly one-third are overweight, according to the latest government data.

Alarming statistics such as these have prompted government agencies, schools, and nonprofit organizations to launch a barrage of anti-obesity programs in recent years.

Health.com: Easy meals for families to enjoy together

Their sense of urgency is not shared by all parents, however. In fact, studies have consistently shown that parents tend to underestimate their child's weight and the health risks associated with being too heavy.

In a 2006 study that surveyed the parents of obese children, only one-half recognized that their child was overweight, and less than one-third said they were "worried" about their child's weight. In another survey, only 38 percent of parents had taken steps, or were planning to take them, to help their obese child lose weight.

Several factors may be contributing to this indifference among parents, experts say. Some parents believe their child's excess weight is just "baby fat," for instance, and some may simply be in denial. Or it could be that parents have concluded their kid is normal after eyeballing his or her overweight peers.

"Because so many children are overweight and obese ... they don't stand out as much as they would have 20 or 30 years ago," says nutritionist Elisa Zied, a registered dietitian and spokesperson for the American Dietetic Association. "I almost see a lack of concern with some parents."

Parents should be concerned. Although some overweight kids do outgrow their baby fat, roughly two out of three are likely to grow up to be obese adults, according to a 2009 study by the U.S. Centers for Disease Control and Prevention (CDC). Childhood obesity, moreover, is associated with a slew of serious health problems, including diabetes, asthma, heart disease, and depression.

How do you know if your child's chubbiness is baby fat or a serious health problem? You can't always tell just by looking, and you can't always count on pediatricians to broach the subject. But you can take matters into your own hands and adopt habits that will keep your child as healthy as possible.

You can't trust your eyes

It's not entirely clear what accounts for this disconnect. For starters, many parents define obesity differently than health professionals do, and distrust the growth charts used by pediatricians.

In a focus group discussion that was excerpted in the journal Pediatrics in 2001, one mother of a preschooler defined an obese person as someone who "can barely walk." Other mothers denied that their children were fat or overweight, and instead used words like "big-boned," "chunky," and "solid" to describe them.

Susan Carnell, Ph.D., a research fellow and childhood obesity expert at the New York Obesity Research Center, attributes the failure of parents to accurately assess their child's weight to changing social norms. Not only are kids heavier than ever before, but roughly two-thirds of adults are also overweight, and parents who are overweight themselves are less likely to identify their children as overweight, Carnell notes.

"We gain many of our perceptions from comparison with peers," she says. "So if we compare a healthy-weight child with their overweight classmates, we may even think they are too skinny and try to feed them up."

Social values and beliefs may also distort a parent's perception. Parents are more likely to overestimate the weight of their daughters, for instance, perhaps because they feel it is less acceptable for girls to be heavy. Similarly, some studies suggest that parents of different ethnicities and cultural backgrounds have different conceptions of body type and overweight.

The doctor may not bring it up

If you're waiting for your child's pediatrician to tell you that your child is a bit heavy, don't hold your breath. In spite of the myriad health risks associated with childhood obesity, pediatricians often fail to screen for it during annual checkups and office visits.

In a recently published survey of its members conducted by the American Academy of Pediatrics (AAP), virtually every pediatrician said they measured height and weight during checkups.

Even if they do feel that a child is overweight, many pediatricians are hesitant to say so, perhaps because they think it's a touchy subject. In the AAP survey, only 59 percent of pediatricians said they believe that families want to discuss weight.

"I think some doctors are reluctant to bring up weight because they are not trained to deal with it sensitively," says Carnell. Discussing a child's weight with parents in the wrong way -- by implying that they are to blame, for instance -- can make parents "feel guilty and defensive," she adds.

Doctors may also adopt a hands-off approach to weight because they feel there's little they can do. Less than one-quarter of the pediatricians in the AAP survey believed that there are effective treatment strategies for overweight and obesity.

"We all have strategies we use that can make a difference with a certain proportion of kids," says Eugene Dinkevich, MD, the division chief of general pediatrics at SUNY Downstate Medical School, in Brooklyn. "But it's not like an ear infection where you can give someone an antibiotic and they're better."

Pediatricians only set aside about 15 minutes for a regular checkup, Dr. Dinkevich says, and they have to pick and choose which topics to discuss with parents in that time. Doctors must ask themselves, "What am I competent to talk about, and if I talk about it, will it make a difference?" he says. For far too many doctors, he adds, obesity treatment and prevention don't fall into that category.

New guidelines for childhood obesity screening might help reassure pediatricians. In January, the U.S. Preventive Services Task Force, an independent panel of experts that advises the federal government on preventive care, released new guidelines that urge doctors to routinely calculate the BMI of children between the ages of 6 and 18. The guidelines also say that children who qualify as obese should be referred to various interventions, such as nutritional counseling or physical activity programs.

"In 2005, we said you can screen kids, but we had insufficient evidence of any effective therapy for weight loss," says task force chairman Ned Calonge, MD, referring to the previous guidelines. "Now we have evidence that shows you can get modest weight loss through these intensive programs."

What parents can do

Although the new guidelines may encourage pediatricians to monitor the weight of their patients more closely, parents should be proactive about doing so as well.

The easiest and best way to gauge whether your child is overweight or obese is to track their BMI using growth charts, which show the national percentiles for children by age.

Parents should monitor their children's weight more or less from birth, experts say. "If they shoot up on the growth charts in terms of weight, that's when you have to be aware of the situation," says Zied.

"You want to see consistency across the growth charts rather than any fluctuation."

Periods of rapid weight gain have been shown to predict future obesity, says Samuel S. Gidding, MD, the chief of pediatric cardiology at the Nemours/Alfred I. duPont Hospital for Children.

Of course, prevention is also key. Parents need to choose good foods for their children as soon as they stop breast-feeding, says Dr. Gidding.

"A lot of kids are being overfed, and they're being fed foods that really have no business being in a child's diet: sugar beverages, excess juice, lack of fruits and vegetables, too many french fries," he says. "Parents really need to provide nutritious food while the child's a baby."

As children get older, parents should teach them about nutrition, appropriate portion sizes, healthy eating habits (such as sticking to regular meal times), and the importance of being active, according to Zied. These messages are often more successful if they're delivered in kid-friendly terms, she adds.

"Try to teach your kids what's in it for them," Zied says. "Are they going to run faster, throw the ball farther, get more baskets in? Teach it in terms that relate to them, because the health messages get lost."

Above all, parents should remember that their kids are likely to adopt their eating and exercise habits, good or bad, and that they should therefore model healthy behavior.

"You have to practice what you preach," says Zied. "If parents don't have healthful habits, you can't really expect kids to have those either."