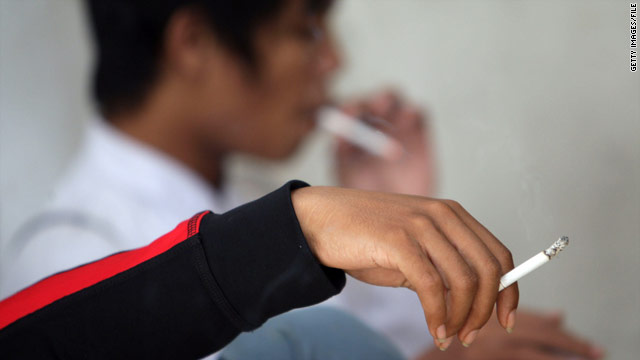 (Health.com) -- There's a species of smoker among us that is common, yet poorly understood.

Their habitat consists of parties, barbecues, and the sidewalks outside bars and restaurants.

They prefer to scrounge for their cigarettes, and if they do buy a pack, they're apt to nurse it for a week or more. You may hear them say, "I'm not a smoker," or "only on weekends."

These are "social smokers" -- and there are more of them than you might think.

Smoking is often characterized as an all-or-nothing activity -- on doctor's office questionnaires it's usually a yes-or-no question, for instance -- but by some estimates, anywhere from one-fifth to one-third of adults who smoke don't light up every day.

While some of these so-called nondaily smokers smoke regularly but sparingly, up to 30 percent likely fall into the social-smoker category.

Hard numbers are difficult to come by, in part because the definition of a social smoker is so vague. A 2007 study of social smoking among college students -- one of very few that have been published on the subject -- found the term was used "loosely and inconsistently," even among researchers.

But most people know a social smoker when they see one. They smoke occasionally, almost always in groups, and more often than not while drinking alcohol. By definition, they do not consider themselves addicted to nicotine. Many started smoking casually in high school or college but never graduated to a daily habit.

"If I'm out drinking, or hanging out with people who are smoking, then I usually get the urge to smoke," says Vickie, 45, from New York. "But I might smoke Friday, Saturday, Sunday, and then not smoke for a week."

Vickie's friend Katherine, 46, has smoked intermittently since her college days, but she limits it to specific times and places.

Though she sometimes goes for months without smoking, she may smoke a whole pack in a weekend if some old friends are in town or if she's on vacation.

"Smoking is a small indulgence that I sometimes do," says Katherine, "sort of like eating too much ice cream."

Social smoking is often compared with social drinking -- that is, the social smoker is to the "real" smoker what the casual weekend drinker is to the alcoholic. Even if social smokers (or drinkers) go a little overboard sometimes, their behavior is still fundamentally different.

Social drinking is an "important analogy," says Saul Shiffman, PhD, a professor of psychology at the University of Pittsburgh who specializes in studying occasional smokers. One of the "hallmarks" of social drinkers (the vast majority of those who drink alcohol), says Shiffman, is that they drink in specific settings.

"They'll drink at dinner with friends, they'll drink in the evenings on weekends -- but they don't drink in the car, or first thing in the morning," he explains. "It's the confinement of use to particular situations that marks someone who uses a drug but not in an addictive way."

Social smoking is a trend

While the overall number of smokers in the United States is dropping, the proportion of occasional smokers appears to be on the rise.

Government surveys show that the number of nondaily smokers rose 40 percent between 1998 and 2001, according to Shiffman. News reports and studies have also provided anecdotal evidence that social smoking is increasing, especially among young people.

Health.com: Social, sneaky or skinny? The 7 types of smokers

The reasons for this apparent trend haven't been fully explained. Some suggest that the growing awareness of health risks, the stigma surrounding smoking (which may explain why the smokers interviewed for this article didn't want their full names used), and smoking bans in public places are causing heavy smokers to cut back.

Vickie, for instance, wouldn't be caught dead smoking around her two young children, and the restrictions against smoking at work or inside bars and restaurants are often enough to extinguish her urges, she says -- especially in the wintertime.

Another popular theory is that social smokers, unlike social drinkers, don't really exist.

Social smokers, the thinking goes, are low-level addicts either in denial or on the brink of addiction. It's a bit like the old saying about there being two types of motorcyclists: those who have had accidents and those who are going to.

And research indicates that there may be something to this: In the recent study of college students, 60 percent of the students surveyed who denied that they were smokers did identify themselves as social smokers; roughly 10 percent of these alleged nonsmokers in fact smoked at least every other day.

The denial theory may be a bit simplistic, however. We're accustomed to thinking of everyone who smokes as an addict -- nicotine is known to be one of the most addictive drugs, after all -- but according to the most recent National Survey on Drug Use and Health, of the 40.9 million adults over the age of 18 who had smoked a cigarette in the previous month, only about 60 percent could be considered dependent on nicotine.

The remaining 40 percent includes social smokers, as well as a group known as "chippers," a term originally used to describe intermittent, nonaddicted users of heroin.

These smokers, who remain something of a medical mystery, have smoked up to a pack a week for years, or even decades, without becoming dependent on nicotine. When they stop smoking for a day or two, they suffer none of the cravings, irritability, and other withdrawal symptoms that torment addicted smokers.

It's unclear why this is; it may be that the way their brains are hardwired leaves them less susceptible to addiction.

Not all social smokers are chippers, but there is certainly some overlap between the groups. Katherine has noticed that she has always had a different relationship with cigarettes than some of her friends who smoke more heavily.

"Even when I've had 10 cigarettes in a night, I don't think I've ever thought, 'I better not do this because I'll get addicted,' which drives real smokers crazy," she says. "Even when I first tried cigarettes, in high school, I could see that for my best friend smoking was a different thing than it was for me. Her smoking kept increasing, and I just was never like that."

Addicted to smoking, not nicotine?

Social smokers may not be addicted to nicotine, but that doesn't necessarily mean that they're not hooked on smoking -- whether it's the ritual itself, the sensation of the smoke, or the nicotine high it provides.

"These folks take nicotine for its psychoactive effects, not to stave off withdrawal," says Shiffman. "But that's not to say that they don't come to need it in some other way."

Lacey, 23, a recent college grad in Athens, Georgia, was a "real" smoker for four years; she traded daily smoking for social smoking when she was 20. She didn't have any trouble scaling back -- she smoked more out of boredom and habit than nicotine addiction, she says -- but she has found her social smoking at bars surprisingly hard to kick.

"It's been difficult," she says. "It's a really big habit, but I do think the nicotine has something to do with it. When you're drinking, smoking a cigarette is one of the best feelings in the world."