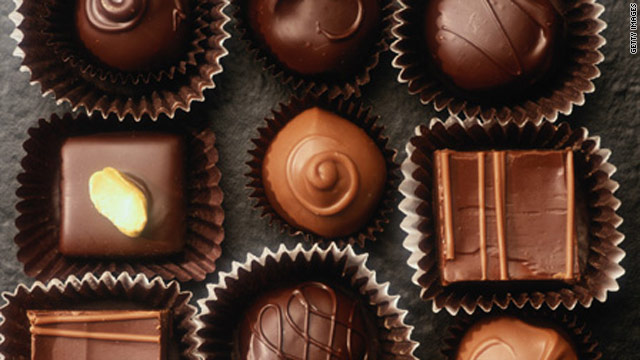 Eating chocolate may be a form of self-medication for depressed people or it may simply be a comfort food.
STORY HIGHLIGHTS
RELATED TOPICS

(Health.com) -- When Dina Khiry is feeling a bit down, she reaches for chocolate. "I like Reese's peanut butter cups, Hershey's bars, and chocolate cake batter," says the 24-year-old public relations associate. "I feel better in the moment -- and then worse later on, when I realize that I just consumed thousands of calories."

Khiry's emotional relationship with chocolate isn't uncommon, new research suggests. According to a study published this week in the Archives of Internal Medicine, people who feel depressed eat about 55 percent more chocolate than their non-depressed peers. And the more depressed they feel, the more chocolate they tend to eat.

Although gorging on chocolate and sweets to beat the blues has become a cliché thanks to sitcoms and romantic comedies, there's been "little prior scientific literature linking chocolate and depression," says the lead author of the study, Dr. Beatrice Golomb, a professor of medicine at the University of California at San Diego School of Medicine. The study, she says, provides evidence to support "the popular perception that when people need a pick-me-up, they pick up chocolate."

It's unclear, however, whether depressed people eat more chocolate simply because they crave it, or whether chocolate consumption itself somehow contributes to a depressed mood.

In the study, Golomb and her colleagues surveyed more than 900 people about their weekly chocolate consumption and their overall diet. They also gauged the moods of the participants using a standard questionnaire used to screen for depression. (People who were taking antidepressants were excluded from the study.)

Health.com: How to make chocolate a healthy indulgence

The men and women who were considered to be depressed ate 8.4 servings of chocolate per month, while their counterparts who weren't depressed consumed just 5.4 servings each month.

Study participants who scored higher on the depression scale ate even more chocolate, nearly 12 servings per month, the researchers found. (An average serving was defined as one small chocolate bar or one ounce of chocolate candy.)

To zero in on the chocolate-mood connection, the researchers took into account a range of other dietary factors, such as calorie, fat, and carbohydrate intake. These measures were similar in the depressed and non-depressed people, which suggests that the link between chocolate and depression is unique in some way, according to the researchers.

While popular culture usually depicts women as emotional chocoholics, the study shows that men, too, may reach for chocolate when they're down and out. Seventy percent of the participants were men, and the results were similar in men and women.

Explaining the apparent link between chocolate and depression is a classic chicken-or-egg question, says Golomb. Eating chocolate -- which has been shown to improve mood in animal studies -- may be a form of self-medication for depressed people, she and her colleagues suggest, or chocolate may simply be a comfort food.

The link may run in the opposite direction, however. Like alcohol, chocolate may make depressed people feel better in the short term, but eating it regularly may have a negative effect on health and mood in the long run, the researchers say -- especially if the chocolate is in products such as candy bars that are filled with saturated fat and other unhealthy ingredients. Indeed, as Khiry suggests, overindulging in chocolate when you're down can sometimes leave you feeling even worse.

Susan Albers, a psychologist and colleague of Bea's at the Cleveland Clinic, says that chocolate raises levels of the brain chemical serotonin -- as do some antidepressants -- and also boosts blood-sugar levels, which can make you feel more energetic.

"Emotional chocolate eaters may be looking for an immediate change that exercise or antidepressants can bring," she says. But, she adds, a chocolate rush is often followed by a crash, and "The crash will make the depression worse."

Albers teaches chocoholics to stop and smell the chocolate -- literally.

"When we eat chocolate, we tend to think about the next piece before we finish the one we are eating," says Albers, the author of 50 Ways to Soothe Yourself Without Food. "I teach people to slow down the process by opening up the chocolate slowly, listening to it crinkle, and slowing down the whole process so they actually taste it and realize that a small amount can make them feel a lot better."

Khiry uses a similar strategy. To keep herself from eating too much chocolate, she sometimes tries to suck on each piece so it lasts longer.

The study had some important limitations, as the researchers note. It was not initially designed to investigate chocolate and mood, and the data was taken from a larger study on the effects of cholesterol-lowering statins. Furthermore, the study didn't distinguish between different types of chocolate (such as dark and milk chocolate, which contain different amounts of cocoa).

And because the study simply took a snapshot of the participants at one moment in time, the results don't show how chocolate consumption and mood may change or interact over time.

Still, Bea says, the findings could serve as a red flag for people who may be drowning their sorrows in Hershey's.

"If you're depressed and eating lots of chocolate, look for more direct solutions such as psychotherapy and/or antidepressants," he says. "If you crave chocolate a lot, examine your mood state and deduce if depression is a factor in your life."