Death at 25: Blogging the end of a life 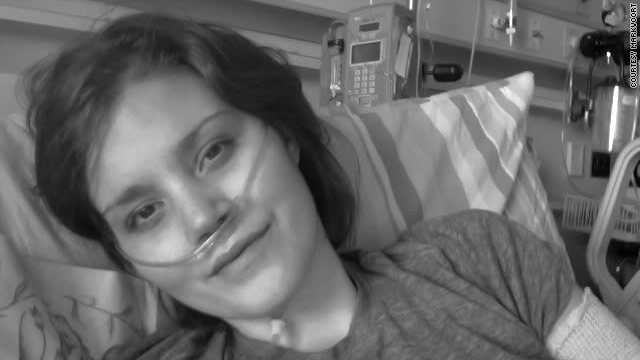 (CNN) -- The former beauty queen stared into the camera, but this was no pageant or performance. She looked frail and thin, and her hair was rumpled. But Eva Markvoort smiled weakly.

"Hello to the world at large," she said in the video. "To my blog, to my friends, to everyone. I have some news today. It's kinda tough to hear, but I can say it with a smile." Propped in a hospital bed, Markvoort sat surrounded by her family. "My life is ending."

Markvoort had cystic fibrosis, an incurable disease that causes mucus to accumulate in the lungs. For nearly four years, she narrated an unvarnished blog about life with a terminal disease. Even when it appeared unlikely that she would receive a second double lung transplant, the 25-year-old continued to chronicle life on her blog.

The public sharing of one's last thoughts is a way to acknowledge that the end is near, but it also destigmatizes death for others, said medical experts who work with terminally ill patients.

In the Internet age, many people reflect on their lives through video, personal blogs and larger websites such as CaringBridge.org, where people who have major health events connect and share online.

"What we're seeing over the last decade, we are gradually moving from a culture that had become during the 20th century, very closed about death," said Dr. Chris Feudtner, research director of Palliative Care Services at the Children's Hospital of Philadelphia in Pennsylvania.

A cultural shift has occurred, he said, referring to columnists and Randy Pausch, a computer science professor at Carnegie Mellon University, who discussed their impending deaths with frankness. Pausch's last lecture, urging students to fearlessly pursue their dreams, went viral on YouTube in 2007, getting more than 11 million views.

Their line of thinking may be, "I'm still alive. I don't want to be closed. I want connection. I want to be able to share what I'm learning on this journey," Feudtner said.

Bloggers like Miles Levin, an 18-year-old who had a rare soft-tissue cancer and died in 2007, and Michelle Lynn Mayer, a 39-year-old mother who had scleroderma and died in 2008, shared their thoughts on living and dying, too.

"We all tend to be open via video, blog or Facebook about what we do every day. It's hardly surprising that openness extends to people's last days or weeks," said Dr. David Cassarett, author of the book "Last Acts," about end-of-life decisions.

These bloggers, Cassarett said, are helping the rest of us through largely uncharted territory. He used a sports analogy to explain. 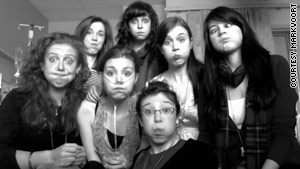 "I've loved more than you could possibly think." Markvoort, center, with friends in her hospital room.

"Hardcore bicycle riders ride in packs, and there's a tradition," he said. "The one in the front points out hazards in the road to those who come behind. It's both an opportunity to be helpful, if you're in front. You spot sewer grates, so others can avoid accidents."

Blogs like Markvoort's could be acting similarly, he said. They don't shy away from the ugliness and brutality of the dying process.

"They're not just about hope but also about despair. That is, they're telling us not just what we want to hear but also what we need to hear," Cassarett wrote.

Markvoort started her blog in 2006 because hospitalized patients with cystic fibrosis were isolated because of infection. Alone in her hospital room at Vancouver General Hospital after visiting hours, she sought to connect with other patients by finding them online.

The blog's name 65_RedRoses, originated from her childhood inability to pronounce cystic fibrosis; she, as have many other children with the disease, called it "65 roses." Markvoort added the word red because it was her favorite color.

Markvoort was the subject of a Canadian documentary also called "65_RedRoses." It showed her harrowing experiences with the disease: violent coughing, vomiting, IVs, the painful procedures that made her scream. 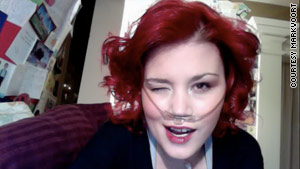 Her dreams: "Stepping out of this room ... skipping down the street breathing free, free."

But less than two years later, her body began rejecting the organs. Her lung capacity dwindled, and every breath became laborious.

Sometimes, her blog posts were raw, filled with "episodes of projectile vomiting, hours of gasping for breath, waves of nausea lulling out into hours of sleepiness."

"I'm drowning in the medications," she wrote. "I can't breathe."

"We connect differently than your generation. I'm part of the digital world," Brine recalled her daughter telling her.

The constant theme in Markvoort's blog is love.

Markvoort grew up in a suburb of Vancouver, Canada. Girly to the core, she dyed her hair red and loved outrageous fashion like pink boas, polka dot dresses and striped knee socks. She was crowned a beauty queen (of New Westminster, a suburb of Vancouver) and attended University of Victoria, hoping to become an actress. 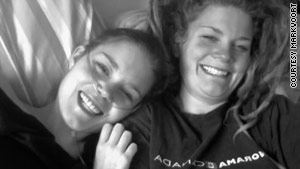 But she couldn't pursue that career because of her unpredictable health.

"But she has found other ways to have that artistic outlet, and writing the blog is one of them," her mother said.

She championed cystic fibrosis awareness and organ donations. From Los Angeles to Poland, letters, stuffed animals and cards poured into her hospital room.

"I felt so selfish when I stumbled across your [LiveJournal] on here, because I've been smoking cigarettes for years, taking my lungs for granted. You helped me quit the worst habit I've ever had," one wrote.

When Markvoort was too frail, she dictated blog posts to her friends and family.

"She had already processed the concept of dying," her mother said. "And for her, she came to terms with it quite quickly. For her it was like, 'Oh, my gosh, I don't know how much time I have. I have things to say.' There was a sense of urgency on her part."

Sometimes, her posts have no words, just pictures of her and her loved ones, with their eyes crossed, tongues sticking out and comical gestures.

She died the morning of March 27.

In the same style that she had allowed her readers (who were often strangers) into her life, Markvoort's family plans to hold a memorial service that will run in a live stream on her blog at 7 p.m. ET Friday.

"She indicated that she thought it would be a cool idea if whatever we did, was made available for her online blogging community," her mother said.