Coffee: Is it healthier than you think? 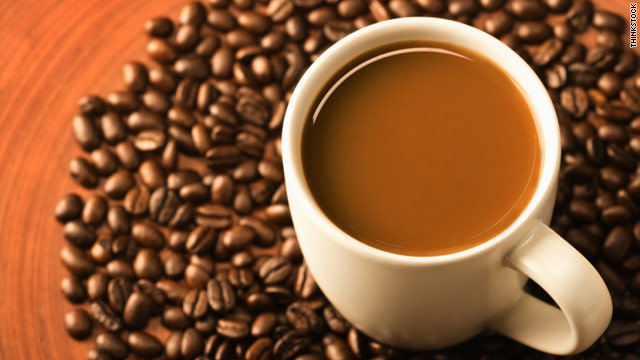 Research suggests that despite the downsides of coffee, it may have an upside, such as antioxidants.
STORY HIGHLIGHTS
RELATED TOPICS

"I have been a coffee drinker for more years than I can remember," she says. "My coffeemaker must have an auto-start feature so that when I wake up, it's ready."

The 53-year-old former software company representative from Aurora, Colorado, never uses cream or milk because they just "spoil the taste." She prefers coffee over alcohol -- even at a bar.

Murszewski has a lot of company. More than half of adults in the U.S., or 54 percent, are habitual coffee drinkers, according to the National Coffee Association. In fact, 146 billion cups are consumed in the U.S. each year, nearly three times more than tea.

But for years, coffee had a bad reputation. Linked in many people's minds with smoking, coffee is associated with over-caffeination and insomnia.

The caffeine found in coffee can stay in your system for up to 12 hours, making it more difficult to fall asleep, and it affects your quality of sleep as well. Caffeine is also a diuretic, meaning that it increases urine output, which can lead to dehydration.

The general consensus used to be that tea was the better bet in terms of health benefits. But recent research suggests that despite the downsides of coffee, the "devil's brew" does have an upside: Coffee drinkers may be at lower risk of liver and colon cancer, type 2 diabetes, and Parkinson's disease.

Health.com: The many perks of coffee

And in 2009, two coffee studies suggested additional benefits: Coffee-drinking men seemed to have a lower risk of advanced or lethal prostate cancer than other men, and middle-aged people who drank moderate amounts of coffee -- three to five cups a day -- had the lowest risk for dementia and Alzheimer's disease later in life compared to less (or more) frequent drinkers.

Can drinking coffee even help you live longer? Maybe. A 2008 study found that women who drank coffee regularly -- up to six cups a day -- were less likely to die of various causes during the study than their non-coffee-drinking counterparts. Because consumption of decaf coffee showed similar results, researchers don't think caffeine is at work.

While coffee drinkers may have other lifestyle habits that could explain the potential health benefits, researchers are also looking for compounds in coffee that explain the results.

One possibility? Antioxidants, those healthy compounds most often associated with fruits and vegetables. While the amount of antioxidants per serving is indeed much higher in things like berries, beans, and pecans, these foods are consumed less frequently than coffee.

In fact, a 2005 study found that Americans get more antioxidants from coffee than anywhere else. More than half of adults drink coffee daily, and the average coffee drinker downs about three cups each day.

"Most people drink it for the caffeine," says Joe A. Vinson, Ph.D., a professor of chemistry at the University of Scranton who led the 2005 study and has studied coffee extensively. "[But] it's the Number 1 source of antioxidants in the U.S. diet."

Polyphenols or flavonoids, the type of antioxidants found in coffee, are also found in other foods and drinks, like tea, red wine, and chocolate. All three have been proven to moderately help brain function, a benefit that can't be chalked up to caffeine, says Vinson, who has received speaking fees from the National Coffee Association. Caffeine, the most commonly used drug in the U.S., says Vinson, does affect alertness, but hasn't been found to offer much in the way of health benefits.

Health.com: The healing power of tea

Polyphenols are the "the good guys in coffee," says Vinson. "If you're not interested in keeping alert, then it seems decaf coffee would be your best bet."

Researchers have investigated other compounds in coffee, such as chlorogenic acid, which also gives eggplant its bitter flavor. In fact, there are potentially hundreds of biologically active compounds in coffee. "One of the detriments of working with foods and beverages is they're mixtures," says Vinson. "There's no magic bullet compound; it's the mix."

Coffee may even have a hormone-like effect in the body, says Clinton Allred, an assistant professor in the department of nutrition and food science at Texas A&M University. A compound known as trigonelline "can act like estrogen," he says. "People didn't know coffee would carry such activity."

Because it acts as a hormone, trigonelline may be dangerous in women who have breast cancer, but it may also protect against colon cancer. "Estrogen is preventative of tumor formation for colon cancer, we believe," says Allred. "But it's just way too early for us to know [all] this particular compound could do."

Coffee drinkers may have healthier lifestyles

Another obstacle in pinpointing the benefits of coffee is that it's difficult to isolate the effects of coffee from other healthy habits or lifestyles associated with coffee drinking. A 1999 study of coffee and tea consumption in Scotland, for instance, found that coffee drinkers were younger, had higher incomes, and were healthier in general than tea drinkers.

"That's the problem [with most of the studies done on coffee]," says Vinson. "There's no perfect study out there because they can't control all the variables. The problem with a human study is everybody's different."

To isolate the benefits of the coffee in particular, newer studies have focused on filtering out the effects of less-than-healthy behaviors, like smoking, that coffee drinkers are likely to engage in.

In a 2008 study, Esther Lopez-Garcia, a researcher in the department of preventive medicine and public health at the Autonomous University of Madrid, in Spain, found that coffee drinkers had a slightly lower risk of death from all causes than people who didn't drink coffee.

Although the participants in her study were all nurses and health professionals, she says the results are probably applicable to people with similar education and socioeconomic status. "However," she warns, "[generalizing the results] has to be made with precaution, because it's clear that socioeconomic status influences mortality."

Of course, coffee isn't a quick fix, and may even cause problems in some people. It can worsen existing heart conditions, and caffeine could cause sleeping problems, as well as a racing heartbeat and anxiety. Plus, many coffee drinkers are only adding calories and fat to their diet by mixing in heavy cream and too much sugar.

More research needs to be completed before doctors can recommend coffee to their patients, experts say.

"It is always difficult to give dietary recommendations based on studies that lasted only several months, because they cannot investigate long-term effects," says Christian Herder, a diabetes researcher at Heinrich Heine University, in Dusseldorf, Germany. In a 2010 study, for instance, Herder found that changes in coffee-drinking habits had no adverse effects on diabetes risk factors.

But because the study lasted only three months, he says, it didn't provide enough evidence to directly recommend -- or prohibit -- drinking coffee. "There seems to be no reason to discourage middle-aged men and women from drinking coffee," Herder adds.

However, says Lopez-Garcia, "anyone with health problems that can be worsened by coffee -- insomnia, anxiety, hypertension, or heart problems -- should ask the doctor about his specific risk."

A better understanding of the risks and benefits of coffee might not come anytime soon. "Studies are few and far between," says Vinson. Plus, he says, many of the studies that have been done entailed "super-high consumptions" (12 cups a day, for example) and may not apply to the normal amount Americans typically drink.

So far, evidence of coffee's health benefits is limited. "I want to be convinced, but I haven't been. It's not cause and effect; it's just a hint," says Vinson. "[But] there are a lot of wonderful hints."

In the meantime, coffee drinkers can still dare to hope their precious brew is also good for them. Murszewski says she has noticed benefits from her java habit. "I have not asked my doctor about the benefits of coffee, although I have noticed that when suffering from a migraine, coffee helps," she says. "It's not full-blown with drinking coffee."