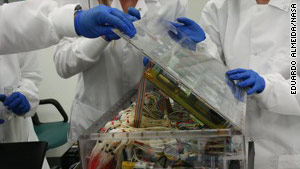 Scientists carefully remove stem cells from a shelf on the Discovery shuttle after its return.
STORY HIGHLIGHTS
RELATED TOPICS

(CNN) -- New research on the most recent shuttle mission may help astronauts cope with space sickness and lead to better treatments for Earth-bound ailments including salmonella poisoning.

"These experiments sound like they could be what the first frontier was largely about -- knowing more about the potential of space to understand our potential on Earth," said Buzz Aldrin, Apollo 11's pilot and the second man after Neil Armstrong to walk on the moon in 1969.

More than half the astronauts who flew on Apollo missions got sick on board or developed infections when they returned to Earth, according to NASA.

"It was part of the experience then as it is now," Aldrin said. No training truly prepared him for the physical rigors of space, he said.

"When you go up, some get dizzy, headaches, you want to vomit and throughout the flight -- look, some people don't want to talk about this particular effect -- you might lose control over ... your system, let's say," he said. "You're packed in there and people are sharing a tiny area."

Last week when the shuttle Discovery returned to Kennedy Space Center in Florida, it not only brought back a seven-member crew, but also 16 mice, several containers of mouse and human stem cells and numerous vials of securely held salmonella, the bacteria that sickens approximately 40,000 people every year, according to the Centers for Disease Control and Prevention.

"Salmonella is the leading cause of infectious diseases worldwide, and there's been a desperate need for a vaccine for decades," said Cheryl Nickerson, a microbiologist at Arizona State University's Biodesign Institute who is helping lead NASA's latest effort. She has placed previous salmonella experiments on NASA missions that have shown the bacteria is more virulent in zero gravity.

The space shuttle is a "microbial factory," she said, an ideal zero-gravity environment to watch microbes move in super slow-motion, a pace similar to how they move in the human gut.

"When we strip pathogens of gravity, it's like they reveal themselves more to us and we can understand their behavior patterns better," Nickerson said. "Better understanding of behavior leads to prevention or better treatment for the general population."

Findings could also lead to changes in protocol astronauts follow when they get sick on board, structural adjustments to the interior of the spacecraft to better halt the spread of germs or contain an outbreak of illness and improved testing of food that could be loaded onto a shuttle. No astronaut has gotten food poisoning on board, Nickerson noted, but during testing of foods for the shuttle, various products have been disqualified because of potential infection.

"Maybe it's as simple as changing the disinfectant used aboard," said Nickerson.

NASA researcher Eduardo Almeida and former astronaut Millie Hughes-Fulford are spearheading the second and third experiments from Discovery. Fulford, a molecular biologist at University of California San Francisco, will examine how the white blood cells of the mice in space differ from white blood cells of rodents on Earth.

Almeida is analyzing mouse stem cells to decipher why cells appear to degenerate more rapidly in space. Before the shuttle blasted off two weeks ago, Almeida and his team placed millions of cells into a dozen reactors that grew muscle tissue. The reactors -- and all the experiments -- were placed securely mid-deck on the spaceship and kept separate from the crew.

"We've seen the same rate of degeneration in relatively young astronauts as we see in elderly people, so what is the cause of that?" said Almeida, who is based at NASA's Ames Research Center in Northern California.

"What we study in space that may help astronauts will also be relevant to medicine on Earth for patients in wheelchairs, anyone suffering from muscle atrophy, patients who are comatose or degeneration brought on simply by age."

Almeida said his initial findings may be available in a few months.