Periods -- Who needs them anyway? Women have mixed feelings 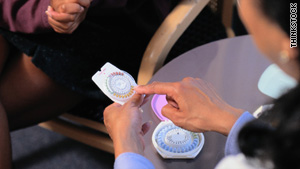 (CNN) -- Fifty years ago, women obtained a new level of control over their reproductive systems. The introduction of the birth control pill meant they could have sex without getting pregnant, decide how far apart to have their children and they could even decide when -- or whether -- to have a monthly period.

Women typically received 21 days of active pills, which contain hormones that prevent the ovaries from releasing eggs. That was followed by seven days of placebos, during which the body resumes as if having a regular menstrual cycle. Today, 19 percent of women between ages 15 and 44 are using that form of contraception according to the CDC, and their attitudes about what the pill can do for them continue to shift.

Ashley Schwartau says she has always found her periods to be uncomfortable, unpredictable and even "gross." So when her gynecologist told her it was OK to skip the placebo week on her monthly birth control pill and go straight to the next round of hormones, the 25-year-old Tennessean immediately said, "Yes, sign me up!"

For the past six years Schwartau has been limiting her cycle to a handful of times each year.

"I love choosing when I have a period. It's genius," she says.

Not every woman is quite as enthused.

"It's nature on a leash," says Elaine Wilkes, a nutritionist from California. Wilkes believes if something is not right with her period, it's a sign that something else is going on in her body. So, for her, the thought of tampering with the process makes no sense.

"It's wanting nature to fit into our schedule," she says. "We're trying to outsmart the body -- big mistake."

Women's attitudes towards their periods are more diverse than one might think. Although the idea of menstrual suppression has become more accepted, many women still have reservations.

A survey from the Association of Reproductive Health Professionals found that 72 percent of women said they did not like having a period. Although 40 percent said they would prefer to never have one, nearly half of the women surveyed said they would not be interested in menstrual suppression.

"There's been a lot of backlash," says Alison Edelman, associate professor of obstetrics and gynecology at Oregon Health and Science University.

Edelman says she has several patients who take regular birth control pills and skip the placebo to regulate their cycles. She says although many are accepting of the idea of not having a period, in general there remains a large population of women who "get all freaked out."

Do women need to have a menstrual cycle anyway?

"The menstrual cycle is for reproduction," says Dr. Leslie Miller, a private practice obstetrician and gynecologist who has done extensive research on the topic. She says society has changed over the years and that using continuous birth control is a modern solution for women who are having fewer children and giving birth later in life.

The menstrual cycle "doesn't care that you're using condoms or that you went to college," she says. "And nature did not build you for 13 periods a year, year after year."

Not everyone agrees with the idea. Some, like Dr. Susan Rako, author of the book "No More Periods? The Blessings of the Curse," warns women to proceed with caution.

"The message for doing away with a period is dangerous," she says. Rako believes there are still many questions how skipping periods affects a woman's testosterone and iron levels, and that women should do their research beforehand.

"The natural menstrual cycle makes some things possible that doing away with it puts at risk."

One thing that remains certain is that women who are not taking birth control need to have a monthly cycle because the process removes the thick lining of blood and tissue that builds up inside the uterus as the body prepares for pregnancy.

For women using oral contraceptives, experts say the progestin component thins out the uterine lining and reduces this buildup.

"Whether it's two years or 10 years, there's no reason to have a period when you're on the pill," according to Dr. Andrew Kaunitz, associate chair of the department of obstetrics and gynecology at the University of Florida in Jacksonville.

If you do chose suppress your menstrual cycle, talk to your physician about the options. In the meantime, here are four things to keep in mind about continuous-use contraceptives.

1. Not everyone is a good candidate

"Not all women are appropriate candidates for birth control pills. Women 35 or over who smoke, suffer migraines, have diabetes or have high blood pressure, should consider estrogen-free contraceptives like injections, IUDs or the implant," says Kaunitz.

In addition, Miller says it is not known whether adolescents whose bones are still growing would benefit from the low doses of estrogen in continuous-use pills. She says she does not encourage continuous use of birth control for young women for that reason.

The World Health Organization also offers these guidelines for contraception use.

2. Not every birth control pill can be taken continuously

It is not uncommon for physicians to encourage women who want to skip their periods to just change the way they take their regular pill, but Miller warns "you cannot take just any pill package and do it continuously."

Experts say using your regular birth control continuously works best if you are using a monophasic birth control, which means the pill you are taking has the same hormone dose for the three weeks of active pills.

"Different colors have different doses," Miller says, "and that the change in dosage can trigger bleeding and increase your chances of unintended pregnancy."

The Mayo clinic also has information on birth control pill risks and choices..

"The biggest downside of continuous use is that you replace your regular bleeding with irregular spotting," says Edelman, adding "but that should improve over time."

According to the U.S. Food and Drug Administration, one study found that 18 percent of women cited unscheduled bleeding or spotting as the reason they stopped using Lybrel, the first continuous-use drug for pregnancy prevention approved by the FDA. A similar problem has been reported in women using Seasonale, the birth control pill that allows you to have four periods a year.

4. Your iron levels may be impacted

"Women's bodies have only one natural way of getting rid of excess stored iron." says Rako. She says an excess of stored iron can lead to the hardening of the arteries and put women at higher risk of cardiovascular disease.

"We don't totally know yet why women have fewer heart attacks and strokes," says Miller.

She says there is the possibility that menstrual suppression could potentially lead to high iron levels, and she encourages women who suppress their bleeding with the continuous pill to have their ferritin levels, which measures the amount of iron stored in the body, checked every couple of years.