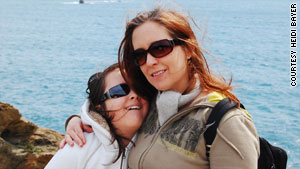 When her daughter Phoebe Carney was 2½, her doctor did a skin test and said that she would be fine drinking milk. Hopeful, the mother gave Phoebe rice cheese with casein, a dairy product.

Suddenly, the toddler began coughing, and the color drained from her face. The mother gave her an antihistamine, but the child's entire body turned red. That's how they ended up in the emergency room.

"I think the tests are inconclusive, and that obviously there's going to be instances where it looks like there has been an outgrowing of an allergy when there actually hasn't," said Bayer, of Brooklyn, New York. "It's an inexact science at this point."

It turns out that the term "food allergy" has no universally accepted definition, nor are there well-accepted criteria for diagnosis, according to a new study published in the Journal of the American Medical Association.

That means that while children like Phoebe may have life-threatening reactions to foods that don't respond to tests, others who think they have allergies may be unnecessarily avoiding foods. There is no cure for food allergies, and doctors are unclear on why some people develop them.

"It's a limiting diagnosis; it's difficult socially, it's difficult nutritionally, and so really trying to nail down whether or not you truly have an allergy is a really important thing," said Dr. Jennifer Schneider Chafen at Stanford University School of Medicine, lead author of the study.

The National Institute of Allergy and Infectious Diseases, which funded this study, is working on guidelines for the diagnosis and management of food allergies. The new guidelines, which are expected to be released in their final form by the fall, will help doctors and patients identify food allergies.

These guidelines recommend that physicians develop a thorough patient history, exclude other possibilities such as food intolerance, use a skin or blood test for allergies and follow up a positive test with an oral food challenge, said Matthew Fenton of the institute. The food challenge -- giving an allergen to a patient in a controlled setting -- may not be appropriate in some cases.

"It's important for parents to understand that there are different diseases that have the same symptoms of food allergies," Fenton said. "If their child has a problem with a food, that doesn't mean that it's an allergy, but it needs to be tested."

More than half of all allergies to foods result from cow's milk, hen's eggs, peanuts, tree nuts, fish and shellfish, the study said. The study focused on these foods.

Chafen's study searched medical research from 1988 to 2009 for articles pertaining to food allergies, scouring over 12,000 papers to evaluate what is known about the topic. They focused on 72 studies on common allergens for their analysis.

"This study supports what we are already seeing in practice: The diagnosis and management of food allergies continues to be a challenge," said Dr. Michael Pistiner, an allergist in Leominster, Massachusetts, who was not involved with the research.

A common method of diagnosing food allergies is the skin prick test, performed at an allergist's office. This involves putting minute quantities of common foods below the surface of the skin, usually on the arm or the back. Some doctors also recommend blood tests called "serum-food specific IgE," which make use of the allergy-related antibody Immunoglobulin E. There is also a method that's not widespread called the atopy patch test, which involves wearing a pad containing the possible allergen for about 48 hours.

None of these methods, however, says anything about the severity of symptoms that a person will experience if he or she ingests the substance -- for some, there may be no reaction at all. There is no one test that's better than the other, either, researchers said.

Patients with "nonspecific" symptoms, such as a rash or abdominal complaints, who tested positive in one of these skin or blood tests have less than a 50 percent likelihood of actually having a food allergy, the study said.

"It's hard to say if a management strategy is effective or ineffective unless we know if the person truly has the disease," Chafen said.

Researchers found, based on the studies, that food allergies affect less than 10 percent of the U.S. population. This analysis says that it's not well established that food allergies are on the rise, although a recent Centers for Disease Control and Prevention report said that in the last decade, the number people with diagnosed food allergies had risen by 18 percent.

Doctors advise people with severe food allergies to eliminate the offending foods from their diets. But there has been only one randomized controlled trial studying the effectiveness of taking foods out of so-called elimination diets, Chafen's study said. Granted, for people with life-threatening reactions, such studies may be unethical, as they would involve having one group of participants eating known allergens. But more of such tests should be done in people who have less severe symptoms, the study said.

The tests are not perfect but can be useful in conjunction with doctor-prescribed elimination diets and food challenges, which involve ingesting the allergen under a doctor's supervision, Pistiner said. It's important to take into account a patient's full history of allergies and other health problems, he said.

"Relying on testing alone can result in overdiagnosis," he said.

There are those like Phoebe Carney who have had the opposite experience, with a test that wasn't sensitive enough. Now 12 years old, she has never outgrown her allergies to milk, eggs, wheat, gluten, soy and nuts.

Her mother, who runs a support group for parents of allergic children, recommends finding a doctor you trust, who makes you feel comfortable and who is knowledgeable about allergies. Do as much research as you can, she says, and go with your gut -- find someone who will answer your questions.

"I have this one patient, my daughter. And I feel like I really know her. I really ask a lot of questions with the doctor. I stand with the doctor at all the skin tests as they're being read, and I have an ongoing dialogue," Bayer said.