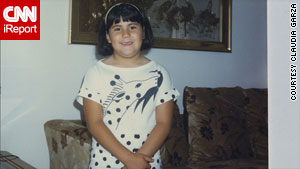 Claudia Garza said she had to wear adult Girl Scout's uniform as a child, because of her weight.

It didn't stop with the nicknames.

For Claudia Garza, these taunts didn't come from schoolyard peers -- they came from her family.

Obese children are 65 percent more likely to be bullied than their peers of normal weight, according to a study published in Pediatrics this month. But teasing about weight is not confined to schools-- it can also occur within the home, according to childhood obesity experts.

Major public health efforts are under way to lower childhood obesity rates as one in three U.S. children and teenagers are estimated to be obese or overweight. First lady Michelle Obama is leading a campaign to reduce childhood obesity from nearly 20 percent to 5 percent by 2030.

Families often have good intentions to help their children, but some may end up inflicting psychological harm through misguided efforts to help children lose weight, experts said.

A 2006 study published in Obesity found that 72 percent of nearly 2,500 overweight and obese women had been stigmatized by family members because of their weight.

Garza, an iReport contributor, started gaining weight at the age of 6. Stressed from learning to speak English and adjusting to a new community after moving to a suburb of Los Angeles, California, she found comfort in sweets -- Popsicles, cookies and ice cream.

"My mom would buy junk food, I would eat the entire thing in one sitting," Garza recalled. "It wouldn't last a week. I'd eat it the same day she'd buy it. I constantly ate."

By the time she was 10, she weighed 140 pounds and barely fit into her class desk -- her stomach rubbed against the table when she sat.

While arguing with her older brother, their childish disagreements turned into insults directed at her: "You're fat. You're always going to be fat."

Everyone in her family, grandparents, uncles, cousins, called her "Gordita," Spanish for fatty.

What can parents do?
-- Provide vegetables, fruits and whole-grain products
-- Include low-fat or non-fat milk or dairy products
-- Serve reasonably-sized portions
-- Limit screen time &nbsp;to no more than 2 hours per day
-- Add physical activity to daily routine and encourage your child to join
Source: CDC

It's common in Hispanic families to have endearing nicknames for each other, Garza said.

During dinnertime, her father would gesture at her from across the table, signaling her to only eat half of what was served. This happened at every family meal, giving her brother more verbal ammunition.

Victimization comes in many forms, said Rebecca Puhl, the director of Research and Weight Stigma Initiatives at the Rudd Center for Food Policy & Obesity at Yale University.

Rudd Center on weight stigma at home and school

"We associate bullying with overt forms of teasing or aggression. It can occur in subtle ways, it can be just as damaging," she said.

Still hungry after dinner, Garza would binge on candy bars and sweets stashed in her bedroom. The junk food wasn't too hard to find.

"I think probably one of the biggest ironies was that even though my parents would say, 'Don't eat this or that,' they'd have [junk food] in the house," she said.

Depressed about the constant scolding about their weight, many children cope "by eating more food and binge eating," said Puhl, a research scientist. "What we need to recognize is stigma is a serious form of stress. For children who are overweight, it's a chronic stresser."

If parents want their children to lose weight, they need to model the behavior they want to see in their children, several obesity experts said.

"Parents are responsible for their emotional wellness," said Perryman, who researches family dynamics related to childhood obesity. "Kids aren't in charge of their own food intake, their sedentary behaviors. They can't sign themselves up for soccer."

The best way to help overweight kids is through family interventions -- eating healthier together and having outings to promote physical activity. There is a common misconception that if children are teased, that will motivate the individuals to lose weight.

"We see the opposite is true," Puhl said. "For both children and adults, they're more likely to engage in avoidance of physical activity."

Constantly admonished to lose weight, Garza said it destroyed her young self-esteem. She described herself as a "loner" at school, and other kids pointed and giggled at her.

But Garza, now 29, said being teased at home stung much more.

Her family insisted they were doing this for her own good, but Garza believes it was destructive.

"After hearing it every single day, you start believing it -- that you are fat, you are ugly, you are a slob, you're not good enough," she said.

Garza resorted to starving herself and exercising strenuously until she lost 60 pounds in high school. Her weight fluctuated as she went through various crash diets, anorexia and drugs.

Five years ago, she stopped using drugs. Garza started reading self-help books and became involved in church. Part of it was also growing up and releasing her anger, she said.

Garza also exercises regularly as a way to relieve stress from long days at the office -- spending one hour lifting weights and another hour on cardio. She is now a certified spin instructor and wants to become a fitness model.

"I never thought I'd be where I am at," Garza said. "It's been such a long process. I've come to terms regardless of where my weight is. It's how you feel, not the number on a scale."

Although they hardly discuss it now, Garza said she's at peace with her family.

They meant well, she said.