Is it safe to eat lettuce amid E. coli outbreak? 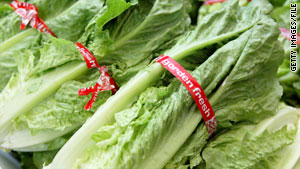 There have been 23 confirmed cases of E. coli from lettuce, the CDC says.
STORY HIGHLIGHTS

If it's lettuce from a grocery store, Powell's answer is yes.

He bought some Wednesday, the day the Centers for Disease Control and Prevention expanded to four states a current outbreak of potentially deadly food-borne illness linked to tainted lettuce.

But would Powell put the green stuff on his plate at a salad bar? Absolutely not.

That's because a current recall of romaine lettuce involves companies that distribute to wholesale and food service outlets. And because "salad bars in general have the potential for lots more contact with lots of hands and people."

Fruits and veggies are good for you, but they can also be risky when eaten uncooked.

"Most food purchases are faith-based," Powell said. "It's very difficult for consumers to know one way or the other."

Powell feels safer buying his produce at bigger grocery chains with more accountability. Still, he said, with no mandatory testing or information printed on packets, it's impossible for buyers to know what they're getting.

There have been 34 food-borne illness outbreaks involving leafy vegetables like lettuce and spinach in the past 15 years, Powell says, including a 2006 outbreak linked to contaminated spinach that sickened more than 200 people.

In the latest lettuce-linked outbreak, 23 people have been confirmed sick with E. coli 0145, a rare strain of the bacteria traced to lettuce harvested from a farm in Yuma, Arizona. No deaths have been reported.

Two distributors -- Freshway Foods and Vaughan Foods -- have voluntarily recalled bagged lettuce that was harvested from that farm.

The multistate recall once again inflamed public fears about eating lettuce, though at this point, people don't need to be concerned about the entire industry, said Mike Doyle, a nationally known microbiologist who directs the Center for Food Safety at the University of Georgia.

But, said Doyle, if you want to reduce risks, "buy whole lettuce and cut it yourself."

Read how to grow your own lettuce

Food safety lawyer Bill Marler said consumers should not give up eating a good thing out of fear. He also suggested that whole lettuce was a safer option than the bagged variety.

"Mass-produced lettuce is big business. The public wants it. But think hard whether the convenience is worth the risk," said Marler, who has filed a lawsuit on behalf of an Ohio State University student who was sickened by E. coli 0145.

The Seattle, Washington-based lawyer credited the industry with having done "a remarkable job" in ensuring that large-scale outbreaks are not as common as they once were, but he said growers, shippers and manufacturers need to do more.

"They have a responsibility to the consumer to do the absolute best they can to get animal feces out of their food products," he said, referring to the source of the bacteria.

He speculated that the true number of people sickened by the outbreak is more than 23. "Probably a lot more, because not very many labs test for E. coli 0145," he told CNN Senior Medical Correspondent Dr. Sanjay Gupta.

Food safety experts have identified lettuce as one of the products needing the most attention from the industry.

Production practices, harvesting, packing, processing and food handling have all been linked to illnesses associated with leafy greens. E. coli can get into food through manure, contaminated water used during growing or harvesting, or improper food handling at a store, restaurant or home.

It's best to ask a lot of questions of the people who sell you the green stuff, Powell said. Was the irrigation water tested? Do the pickers know to properly wash their hands?

Beyond that, the only way to kill bacteria is to cook it. But who wants to eat mushy romaine?