Pressure for female genital cutting lingers in the U.S. 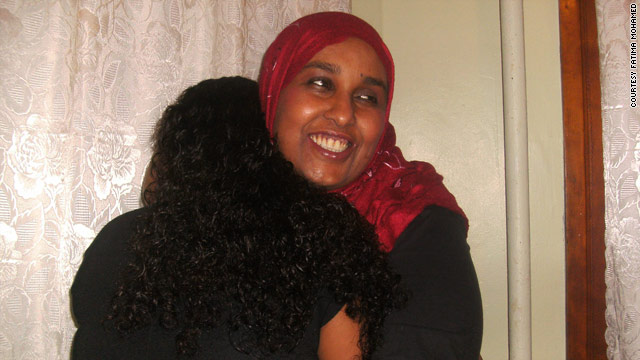 Despite cultural pressures, Fatima Mohamed, a Somali living in the U.S., refuses to allow her 11-year-old daughter to be cut.
STORY HIGHLIGHTS

(CNN) -- Fatima Mohamed, a 45-year-old Somali immigrant living in America, was faced with a question most parents will never worry about: Should my daughter be circumcised?

The United States has outlawed female genital cutting, but cultural and religious pressures to circumcise girls linger among some African and Muslim immigrant families. Mohamed says the decision was an easy one for her to make after going through the painful experience herself in Africa as a child. She strongly opposes the idea of cutting her 11-year-old daughter, an American-born Somali with long curly hair, who plays soccer and likes watching "American Idol."

But not every family in her African community in Massachusetts feels that way. Nor can they they swiftly make the decision to reject circumcising their daughters, because it's a cultural ritual integral a woman's identity, she says.

"They say they don't want to hear it," Mohamed says. "Some think I'm disrespecting my own culture. Some will say, 'You act like an American now. You forgot about who you are.' "

Women at risk of FGC
States with the highest estimated number of women who've been circumcised or are at risk for genital cutting:

Female genital cutting is often a coming-of-age ritual practiced in various parts of Africa, Asia and the Middle East, but the procedure isn't just invoking concerns in the developing world. Religious and cultural beliefs fueling female circumcision often follow immigrants and refugees who move to America. Rarely have cases of female genital cutting been documented in the U.S., but much more likely, cutting has moved underground in the U.S. and overseas, advocacy groups and doctors say.

In the U.S., an estimated 228,000 women have been cut -- or are at risk of being cut -- because they come from an ethnic community that practices female genital cutting, according an analysis of 2000 Census data conducted by the African Women's Health Center at Brigham and Women's Hospital. The Census reports there are roughly 150 million women living in the United States.

There are several types of female circumcision. The most severe types require the inner or outer labia to be sewn together, a procedure performed in parts of Somalia and Egypt. Other forms include excising the entire clitoris or part of the clitoris.

Genital cutting dates back at least 5,000 years, says Marianne Sarkis, a professor of international development at Clark University in Worcester, Massachusetts. Some women desire the procedure because they believe they are dirty or unmarriageable if they are not cut, she said. There are cultures that begin cutting women as early as infancy, while some wait until adolescence.

Not all families in communities where female genital cutting is commonplace will want to participate. In Mohamed's immigrant community in Massachusetts, families are divided, she says. Some refuse to allow the procedure, as she does. Others say they want it, and many remain silent.

Some will say, 'You act like an American now. You forgot about who you are.'
--Fatima Mohamed, Somali immigrant in the U.S.

Occurrences of the practice have been documented in the U.S. In March, a Georgia mother was charged with female genital mutilation after the father noticed an infant's genitals "appeared to be have been circumcised," according to the Troup County Sheriff's Office. Officers wouldn't comment further on the family.

Several advocacy workers say the more common scenario involves sending girls back to their home country to have the ritual performed. Over the past few years, Taina Bien-Aimé, president of the women's advocacy group Equality Now, has heard several anecdotal stories of girls being sent back to have the procedure.

With summer vacation approaching, one 34-year-old mother from Senegal, living in New York City, says she knows several African families in limbo about genital cutting. One of her female friends abandoned her husband earlier this year when he asked for their 6-year-old daughter to be cut in Africa this summer. The friend, who speaks little English and is jobless, fled to a shelter with her daughter.

"A lot of them, it doesn't matter if they [the daughters] were born here, they want the procedure done," said the mother, who declined to be named out of fear of being ostracized by her community. She was also cut in Africa as a child.

National surveys determining U.S. immigrant attitudes toward female genital cutting are nonexistent, because cutting affects few American families, advocacy groups say. Neither have studies been completed to track whether parents are sending their girls to their country of origin to be circumcised. Conducting such studies, doctors and advocacy groups say, would be near impossible since most families remain hushed about the taboo topic.

In response to suspicions of genital cutting being planned in the U.S., Rep. Joseph Crowley, D-New York, and Rep. Mary Bono Mack, R-California, proposed an amendment to close a loophole in the 1996 federal law banning female genital mutilation. The legislation, introduced in April, would criminalize parents who force their daughters to have the procedure abroad.

This spring, the American Academy of Pediatrics released a contentious policy statement suggesting that some physicians who work with immigrant communities that want the procedure should have the ability to prick or nick a girl's clitoral skin in order to "satisfy cultural requirements." The academy says the pricking procedure is harmless, like an ear piercing.

The pricking method is illegal in United States, but it could be effective in certain African communities in reducing harm, said Douglas S. Diekema, a Washington physician and former chair of the bioethics committee at the academy.

"We are very disappointed," said Asmaa Donahue, senior program officer at the Sauti Yetu Center for African Women in New York. "By offering to a person to do it, it undermines the education and advocacy work being done to stop it."

Despite the mixed feelings about the pricking procedure, both advocates and the American Academy of Pediatrics agree that the pressure for American girls in some immigrant communities to undergo genital cutting is a reality.

By offering to a person to do it, it undermines the education and advocacy work being done to stop it.
--Asmaa Donahue, senior program officer at the Sauti Yetu Center for African Women
RELATED TOPICS

"It's naive to think they don't have some equivalent of a Jewish mohel," or person who performs a circumcision, said Diekema, the academy's former bioethics chairman. "Not all circumcisions are done in the medical setting, either."

Reaching out to the immigrant community

Soraya Mire, a Somali film director and activist, works with the African immigrant population in the U.S. and knows that the pressures exist. Her 1994 documentary "Fire Eyes" chronicles her experiences with female circumcision when she was 13.

From her Los Angeles, California, home, Mire has counseled hundreds of genital cutting survivors and immigrant parents by letters and phone calls, including a few who have contemplated sending their daughters abroad to be cut. She sleeps with her cell phone tucked under her pillow, so she can answer at all hours.

"You don't have a right to do this to your children," Mire tells the immigrant community. "You are continuing the abuse."

Mire has received death threats from the Somali community. Some threats stem from her role in helping law enforcement officials in Atlanta, Georgia, prosecute the first case of female circumcision in the U.S. In 2006, Khalid Adem was convicted of aggravated battery and cruelty to children for cutting the genitals of his 2-year-old Ethiopian daughter. He is incarcerated and tentatively eligible for parole in 2012.

Back in Massachusetts, Fatima Mohamed's recollection of the genital cutting at her grandmother's rural Kenya home is clear: Her grandmother's wise voice telling her the procedure was for her own good. Sitting in a chair as the strange women pulled her legs apart. The pain of the incisions.

She was only 9 years old.

"I just thought it was something that had to be done," said Mohamed, who added that she was lucky because many Somali women undergo more severe circumcisions in which their labia are sewn together.

"They go through hell," she said.

Mohamed, too, is reaching out to Somali women in her Massachusetts community. The first step to eliminating the genital cutting, she knows, is discussing the topic. She spearheaded an organization last year called the East African Community Outreach, where part of her job is educating women about the dangers of genital cutting.

Her 11-year-old daughter is too young to comprehend genital cutting, Mohamed says. Instead, they discuss her daughter's dreams to become a pediatrician. Perhaps in a few years, Mohamed will tell her the truth.

"I would never do it to my daughter," she said. "I don't want it. This has nothing to do with religion or culture. I believe nobody should control my child."