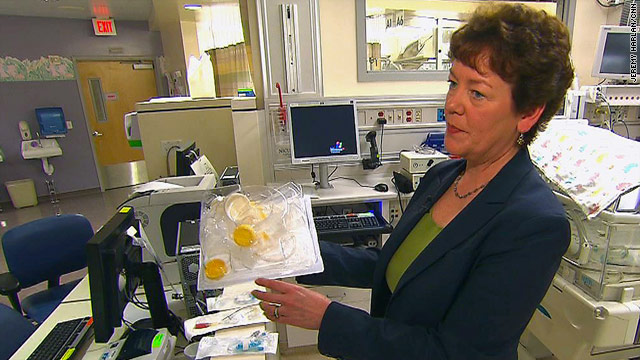 Is enough being done to protect us from chemicals that could harm us? Watch "Toxic America," a special two-night investigative report with Sanjay Gupta, M.D., at 8 p.m. ET June 2 and 3 on CNN.

(CNN) -- Worried about toxic waste and chemical exposure, more and more companies and hospitals are moving away from polyvinyl chloride.

PVC is used in everything from home siding, pipes and flooring to school supplies, car interiors and packaging, electrical cords and medical tubing. But making or burning PVC waste produces dioxins, cancer-causing chemicals that are among the most toxic substances known.

"Our concerns about the ways in which PVC can be disposed of, burned for example ... caused us to begin eliminating PVC from our products," Hewlett-Packard's Tony Prophet said. The computer giant launched its first PVC-free notebook computer last year.

Microsoft, Honda, Wal-Mart, Target and Nike are among other large corporations moving away from polyvinyl chloride, said Mike Schade, the PVC campaign coordinator for the Center for Health, Environment and Justice.

"There's been a major market shift away from PVC in just about every major sector of the economy," Schade said.

Allen Blakey of the Vinyl Institute, an industry trade group, said the move to other plastics is misguided.

"Some of them may feel they can find a better material than PVC. What we find is, they often don't go very far before coming back and finding PVC was the best material after all," Blakey said.

More than 12 billion pounds of PVC are produced in the United States annually, according to Blakey.

The Center for Health, Environment and Justice and other environmental groups are trying to persuade companies to find alternatives to PVC because of dioxins.

Dioxins are a family of chemicals now thought to be toxic at parts per trillion, which is less than a single drop in a backyard pool.

The risks of dioxin became known after Vietnam, where dioxin was an unwanted impurity in the chemical defoliant known as Agent Orange. In the decades after the war, soldiers who handled Agent Orange were more likely to develop a range of cancers and, possibly, Parkinson's disease, diabetes, hypertension and heart disease.

Blakey of the Vinyl Institute said dioxin emissions in PVC production are way down.

"You know, dioxin is actually a great success story. Dioxin emissions in this country have gone down since the '60s. They're at very low levels. Even since the late '80s, they're down 90 percent or so," Blakey said.

The U.S. Environmental Protection Agency began requiring companies to report dioxin emissions only in 2000. Since then, EPA figures show dioxin emissions have declined 66 percent, from 218 pounds to 74 pounds in 2008, the most recent figures available.

"The first place we looked to get rid of PVC was in the neonatal unit. And that's because PVC medical products often contain a plasticizer called DEHP, and that can disrupt hormones," Gerwig said.

DEHP is in the phthalate family. Some research has found that phthalates mimic the hormone estrogen and could disrupt reproductive development and cause other health problems.

A study of 54 newborns in neonatal intensive care units found a connection between the use of flexible tubing and other medical products containing phthalates and exposure to DEHP. The study did not show that the exposure caused any ill health effects.

Last year, the United States banned or restricted the sale of children toys and children's products containing DEHP and five other phthalates.

On its website, the American Chemistry Council says phthalates "have a long history of safe use."

But Kaiser Permanente, the nation's largest nonprofit health plan with 35 medical facility and more than 14,000 doctors, has replaced phthalate-containing PVC in intravenous tubing, catheters and other medical equipment.

The hospital has also replaced PVC in flooring, baseboards, wall guards -- even the plastic backing on carpets.

"Typically, the products that we've replaced, it does not cost more. We found that the majority are cost-neutral. In many cases, they cost less," Gerwig said.

Despite the move away from polyvinyl chloride, Schade said, there's still plenty of vinyl waste. About 500 million to 600 million pounds of PVC are burned each year, he said.

Schade said the Center for Health, Environment and Justice is focused on getting schools to stop using PVC in construction.