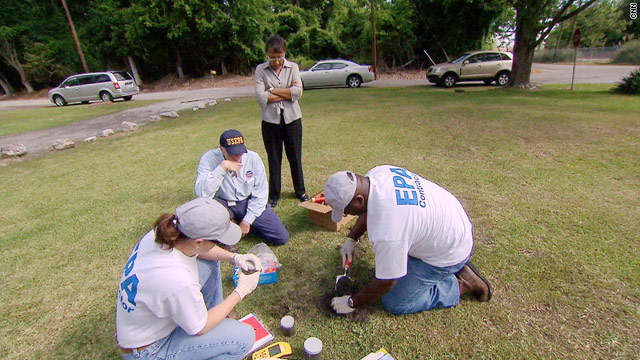 Dorothy Felix watches an EPA crew gather samples for testing in Mossville, Louisiana. "This is a very important day. It's a day that should have come a long time ago," she says.
STORY HIGHLIGHTS
RELATED TOPICS

Mossville, Louisiana (CNN) -- As the Environmental Protection Agency vans roll from one home to the next, each one marked with a red dot on a map, Dorothy Felix tags along like a proud parent.

At each stop, EPA investigators collect potentially tainted water from the kitchen tap and possibly toxic soil samples from the yard.

"This is a very important day. It's a day that should have come a long time ago. We have traveled a long journey and I feel like victory is close," Felix says, smiling.

Nearby, an EPA contractor uses a hand trowel to scoop hard-packed dirt into glass jars for testing at a government lab in Houston, Texas.

Felix and other environmental activists in this southwest Louisiana community tried for decades to convince the state and federal governments they live in a toxic town.

They say the 14 chemical plants surrounding this African-American community are making residents sick.

As evidence, they point to government blood tests showing residents with three times the normal levels of dioxins in their blood. Dioxins are carcinogens, often called the most toxic substance known.

Health surveys in Mossville show widespread respiratory problems and other ailments. Residents also say many in the community have died young, from cancer.

After years of rebuffing their requests, the EPA in January agreed to test whether Mossville qualifies as a federal Superfund site. Investigators arrived in April. Superfund designation could mean federal funding for cleanup and, possibly, relocation for residents who want to go.

Mossville won another victory in March. An international human rights commission agreed to rule on a case brought by Mossville against the United States government.

"It means they are going to have a legal judgment on their right to live in a healthy environment," says Monique Harden, co-director and attorney with Advocates for Environmental Human Rights. "They are hard-working, good people. And they want nothing more than what anybody would want, which is a safe place to raise their children."

Advocates for Environmental Human Rights filed suit with the Inter-American Commission on Human Rights on behalf of the people of Mossville. It was the first time the commission, an arm of the Organization of American States, decided to rule on an environmental injustice case in the United States, according to Harden.

Harden says the ruling could have an impact beyond Mossville because the suit claims legally permitted pollution violates the human rights of residents living nearby.

It means they are going to have a legal judgment on their right to live in a healthy environment.
--Monique Harden, human rights attorney

In response to the ruling, EPA said, "Administrator Jackson has made environmental justice a top priority for the EPA. Under her leadership, the agency is working diligently to ensure that we are using our authority under the law to protect the environment and the health of the residents of Mossville and all communities across the country. ... The United States takes seriously the work and recommendations of the IACHR as it promotes human rights throughout the Americas, including in the United States."

Mossville is a narrow stretch of homes in what was once a rural African-American community. Felix's grandparents moved here, and she lives with her mother in a home her father built. Five generations of her family live close by.

"We felt free here. We felt safe. We had community activities that brought the family together," she says. "Families did their own gardening, farming, cattle raising. All the things that we needed, we had that here."

In the years after World War II, industry came to Mossville, lured by the nearby ship channel and Louisiana's willingness to waive property taxes for industry. Plants now operate on land where Mossville homes and businesses once stood.

A large underground leak of the toxic chemical ethylene dichloride from a vinyl chloride plant forced the evacuation of a large Mossville neighborhood, further shrinking the community, which now has about 375 homes.

The once rural way of life has changed, too.

Mossville is still suffering. There are still people that are dying.
--Dorothy Felix, Mossville activist

Mossville residents are now advised to eat no more than two fish or seafood meals a month caught from the local estuary, and many who grow their own fruits and vegetables, do so in pots, rather than the soil, for fear of eating tainted produce.

The local industry association and the state Department of Environmental Quality both say studies have shown the plants have not resulted in health problems for the people living nearby. Felix disputes the findings.

"Mossville is still suffering. There are still people that are dying," she says.

The EPA expects to have the results of its Superfund investigation by early August. The Inter-American Commission on Human Rights should rule by the end of the year, Harden says.

In the months CNN has followed the story, Felix has insisted she would not be pushed out of Mossville by industry. But as EPA investigators gather evidence, the great-grandmother says she has changed her mind.

"If I got a fair price, I would leave. When I think about it and I think how hard my grandparents worked for this piece of property and how they prayed for it and hoped for it and cried for it and labored for it, it would be sad to just say I'm gone."

But, Felix says, she'd go only if the rest of her family went with her.