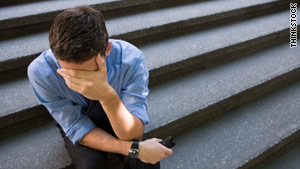 People with a lower IQ may have more trouble talking about or resolving personal problems, a study author said.
STORY HIGHLIGHTS
RELATED TOPICS

This may seem surprising to those who associate suicide with tortured geniuses like Ernest Hemingway and Vincent Van Gogh.

"There's a perception that people with higher IQs might be more neurotic, more anxious, and more depressed--Woody Allen style," says Karestan Koenen, Ph.D., a clinical psychologist and associate professor at the Harvard School of Public Health.

In the study, which was published on the website of the British Medical Journal, researchers followed 1.1 million male military recruits in Sweden for an average of 24 years. All of the men took a standardized IQ test between the ages of 16 and 25.

The attempted suicide rate rose steadily as IQ scores fell, the researchers found. Of the men who had the highest score on the test, roughly 1 in 200 attempted suicide during the study; among the men with the lowest score, the rate was about 1 in 22. (The overall rate in the study was 1.6%, or about 1 in 60.)

Even after other factors that may influence suicide risk were taken into account--such as socioeconomic status, education, and even body mass index--the men with the lowest IQ were still about 3.5 times more likely to attempt suicide.

"We're not talking about a hospital group or a sick population, so these findings are generalizable to the general population," says the lead author of the study, David Batty, Ph.D., a Wellcome Trust Fellow at the Medical Research Council, in Glasgow, Scotland. The Wellcome Trust funded the study.

However, Batty and his colleagues point out that the findings may not necessarily apply to women, to older men, or to men in other countries. And there was no apparent link between IQ and suicide attempts in men with psychosis, they note.

People with a lower IQ may be more likely to attempt suicide because they may have more trouble talking about or resolving personal problems, Batty suggests.

"Individuals with higher IQ scores may be better able to describe to friends and health professionals some of the problems they're going through," he says. "Another explanation might be that individuals with higher IQ scores can come up with more solutions. They may identify the need to see a health professional earlier, or deal with the root causes of their suicidal thoughts by changing jobs or solving relationships."

Health.com: Bipolar celebs -- does it make them more creative?

IQ may also influence coping skills, Koenen says. "People with lower IQs might have more trouble coping with stress, which may make them more vulnerable to reacting more strongly when confronted with a stressful event," she says.

Genes could be at work too, as both IQ and mental health are often shaped by family history. Yet another possibility is that violence, poverty, or some other adversity in childhood could affect both IQ and the risk of suicide.

Although more research is needed to pin down the relationship between low IQ and suicide, the study suggests that mental health professionals should be attuned to their patients' IQ, Koenen says.

"No studies I'm aware of have ever taken IQ into account or looked at how people with different cognitive abilities might respond [to treatment]," she says. "We really need to be thinking of that in terms of our intervention strategies."

Much of the research on suicide and IQ has been conducted in Sweden, where military service is mandatory for men. Recruits are required to take an IQ test at the start of their service and their health is tracked for years afterwards, which provides a near-complete source of data for researchers.

The IQ test taken by Swedish soldiers is a bit different from those used in the U.S. The test includes logic puzzles and visualization problems, but it also has questions on vocabulary and basic physics and chemistry. The lowest IQ score on the Swedish test equates to roughly 73 or below on an American IQ test; the highest score equates to 127 or above.