Who will make your life-or-death decision? 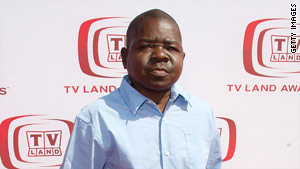 Gary Coleman, who died of a brain hemorrhage last month, had named his ex-wife as his health care proxy.
STORY HIGHLIGHTS

(CNN) -- The idea of a "living will" may sound like you have control over what happens to you if you temporarily or permanently can't make medical decisions for yourself, but in practice it's not so clear cut.

Gary Coleman's living will said he wanted to be kept alive unless he was in an irreversible coma for at least 15 days, according to a court document.

But the actor's ex-wife, whom he had designated as his agent to make medical decisions for him, ordered the doctors to disconnect life support one day after he fell into a coma last month, according to the Utah Valley Regional Medical Center. He died of a brain hemorrhage.

Although it may seem strange that a former spouse could decide whether a person lives or dies, experts say it's not unheard of, since it's up to the health care proxy to determine what the patient would have wanted.

The living will, also called an "advance directive," is primarily a guideline, experts say. Different states have different regulations governing how much weight the living will carries and how much authority the health care agent has. Caringinfo.org, run by the National Hospice and Palliative Care Organization, has state-specific forms.

At most, 30 percent of Americans have completed an advance directive, said Kathy Brandt, vice president of innovation and access at the organization.

Generally, however, the living will alone is not enough to give a direct order about treatment, experts say.

"There's lip service paid to the primacy and importance of what the patient actually said they wanted," but in practice the living will is usually not specific enough to the situation at hand, said Dr. Jack Freer in the department of internal medicine at the University of Buffalo.

Normally, a patient who has written what his or her wishes could not have anticipated the exact situation that they actually find themselves in, Feer said. Treatment decisions in a living will usually represent underlying values and goals, but ultimately it's up to the health care agent -- especially in states like New York, where the proxy person gets a lot of authority -- to make a decision.

In Virginia, the health care proxy is supposed to follow the advance directive when there is one, but there is still room for interpretation, said Helen Cohn Needham, attorney at Needham, Mitnick & Pollack PLC in Falls Church, Virginia.

"Many patients would actually prefer to let their chosen decision maker make the decision even if it's different from what they would have wanted," Freer said.

A person who's thinking about end-of-life-planning has many things to think about in crafting a living will, Needham said. What if the patient has to be put on a respirator temporarily? What if the patient develops dementia or stroke and can't perform basic functions? What does he or she want to happen upon falling into a coma -- and what if doctors aren't sure if the patient will wake up?

Coleman's living will states that life support should be ended if "two doctors decided "my condition is incurable, terminal and expected to result in my death within 12 months" or if doctors "have diagnosed that I have been in a coma for at least 15 days and that the coma is irreversible, meaning that there is no reasonable possibility of my ever regaining consciousness."

At the very least, everyone should have a health care agent in case of emergency, experts say.

The health care surrogate should be someone who shares your beliefs, and whom you trust to honor your wishes, Brandt said.

"You want it to be the smart one with the big mouth who's not afraid of authority," said Needham. "Too often you have to fight with institutions just to get information to make a decision."

There have been extreme cases where doctors have not given all of the necessary information, she said. Needham investigated one case where a woman had had a stroke, and her daughters disagreed about whether to turn off life support. The doctor told Needham that the center of this woman's brain was essentially gone, but he hadn't spelled that out for the daughters because "he didn't want them to lose hope."

But other doctors are quite compassionate and explain what the real options are, she said.

There have also been instances -- and not just on television medical dramas -- where the health care surrogates haven't been followed, or have been challenged, Brandt said. The living will is particularly important in these circumstances, if the matter goes to court, she said.

One aspect of Coleman's case that made it sensational is that he and Price were no longer married, Brandt said.

Whenever there is a life event such as a marriage, divorce, or death in the family, you should revisit your living will to make sure that it still designates the person you most want to represent you in a situation in which you can't speak for yourself, Brandt said.

Your doctor isn't the only one who should have a copy of your advance directive, Brandt said. Give one to your health care surrogate, your neighbors, and other relatives. There are also living will registries available online such as the U.S. Living Will Registry and Google Health.

If you are the health care proxy for another person in a decision-making situation, consider the quality of life that your loved one is able to have under the circumstances, and whether that person would be comfortable with it, she said.