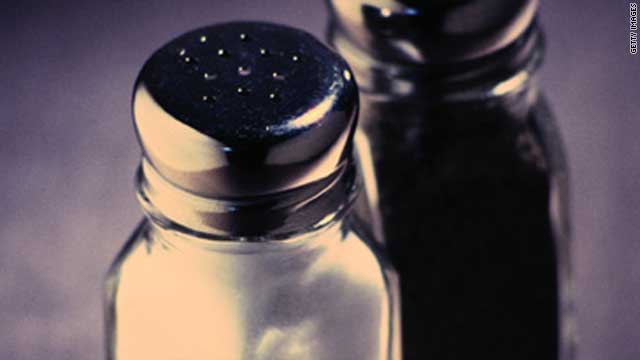 (Health.com) -- If you love salty snacks and reach for the saltshaker like clockwork at every meal, you might think you have dull or underpowered taste buds that need a boost to get excited.

In fact, just the opposite may be true: A new study suggests that you may love salt because you're a "supertaster" -- a person who experiences tastes such as saltiness and bitterness more intensely than other people do.

"We've known for a long time that people don't all live in the same taste world," says the study's lead author, John Hayes, Ph.D., an assistant professor of food science at the Penn State College of Agricultural Sciences, in University Park.

Previous research has suggested that supertasters need less fat and sugar to satisfy their taste buds (and food cravings), and Hayes and his colleagues suspected that the same would hold true for salt as well.

To confirm their suspicion, they taste-tested various off-the-shelf foods on 87 people, roughly a third of whom were supertasters. The others were a mix of non-tasters and "medium" tasters.

Hayes and his colleagues were surprised to discover that the supertasters liked more salt rather than less, even though they were more sensitive to it. But after the researchers analyzed the data in more detail, they realized that salt plays a role in tastes besides saltiness.

For instance, salt helps cancel out bitterness, one of the sensations that supertasters experience in Technicolor. This may explain why the supertasters in the study perceived the low-sodium cheddar cheese to be twice as bitter as the Cracker Barrel, and liked it far less than the other study participants did.

"They needed the salt to block the bitterness of the cheese," Hayes explains.

Experts aren't sure what makes some people supertasters. Taste sensitivity is believed to be genetic, and it may partly depend on the number of tiny bumps on your tongue (known as papilla) that house taste buds. "When you have more of these, you have more taste nerves that send a stronger signal to the brain," Hayes explains.

The study findings, which were published Wednesday in the journal Physiology & Behavior, aren't just an interesting tidbit for dinner-table conversation. They could have implications for the highly publicized efforts to cut the nation's salt intake.

Americans eat far more sodium per day than health guidelines recommend, which over time can cause high blood pressure, heart disease, and other health problems. In response, the Food and Drug Administration is considering limiting the amount of sodium in packaged foods, the main source of sodium in our diet. And some food companies -- such as Kraft (maker of Cracker Barrel) and PepsiCo (the maker of Lay's) -- have pledged to voluntarily reduce the amount of sodium in their products.

Those reductions will happen gradually, however, because our palates have become so used to salt that many foods would taste unbearably bland if sodium levels were dropped abruptly.

Health.com: Why America's salt addiction will be hard to kick

Hayes's study suggests that supertasters may have a harder time than most with a lower-sodium food supply. Supertasters tend to like salty foods better and consume more of them, the study found.

Keri Gans, R.D., a spokesperson for the American Dietetic Association, suggests that supertasters try adding spices to their food instead of salt to compensate for reduced sodium.

"They could be using pepper, fresh garlic, basil, dill, oregano. Maybe they could add a few red pepper flakes," Gans says. "If they're taste sensitive, why not try to encourage people to enhance their food with natural herbs and spices as opposed to salt?"

Even with an overflowing spice rack, supertasters may find themselves yearning for their favorite salty foods.

"What we like to eat drives what we do eat," Hayes says. "Some people might just find it a lot harder to successfully reduce salt intake."