Biking minutes a day may ward off weight gain 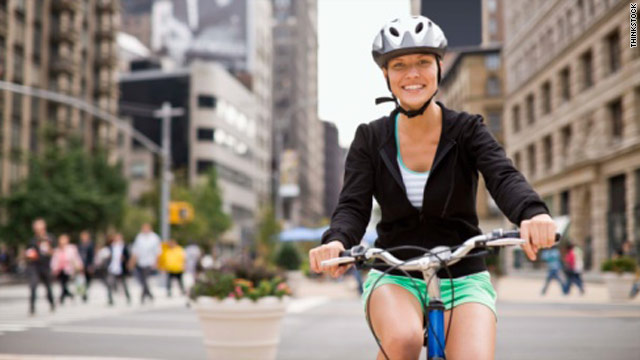 (Health.com) -- Biking for as little as five minutes a day can help women minimize weight gain as they enter middle age, especially if they're overweight to begin with, a new study suggests.

The study followed more than 18,000 premenopausal women between the ages of 25 and 42 for 16 years. During that time, the women gained an average of about 20.5 pounds.

Women who started biking for just five minutes a day gained about 1.5 fewer pounds over the course of the study than similar women who didn't take up biking, the researchers found. Women who increased their daily biking by 30 minutes during the study kept even more weight off, gaining about 3.5 fewer pounds than those whose biking habits stayed the same.

"Bicycling is an answer to weight control," says the lead author of the study, Dr. Anne Lusk, Ph.D., a research fellow in nutrition at the Harvard School of Public Health, in Boston. "Walking is not necessarily an answer, unless the person is walking briskly."

Indeed, Lusk and her colleagues found that women who increased the time they spent walking briskly by 30 minutes per day during the study gained about four pounds less than their peers who didn't increase their walking. (A "brisk" pace is three miles per hour or more.) On the other hand, women who only walked slowly did not manage to prevent any weight gain.

Health.com: How carbs can help you lose weight

Women who were overweight or obese at the start of the study experienced even better results than normal-weight women when they increased their daily physical activity. Overweight women who biked for 30 extra minutes per day over the course of the study gained about seven pounds less than those who didn't, for instance.

The findings should encourage overweight women to not give up on exercise, says Dr. Suzanne Steinbaum, D.O., director of Women and Heart Disease at Lenox Hill Hospital, in New York City. "People tend to say, 'I'm too fat. I can't do it. It's too difficult.' A study like this reminds them not to give up. Do something."

The study appears this week in the Archives of Internal Medicine. Previous research has shown the weight benefits of daily walking, but few studies have focused specifically on biking and none have compared walking with biking.

"A lot of information on physical activity provided to women is very general, encouraging daily activity, but not specifically what kind," says Keri Gans, a spokesperson for the American Dietetic Association. "This study encourages an activity that is not expensive and that almost all women can easily engage in. And if a woman is presently a walker, it's good to know that she must pick up her pace."

Biking and walking are easier than many other forms of exercise to incorporate into everyday life, Lusk points out. "[They] can be a routine part of the day, so you can get your physical activity as a normal part of the day," she says.

The study participants were all nurses and are part of a larger, national study on health and lifestyle that began in 1989. Women with physical problems that make regular exercise difficult were excluded from the current study, as were women who reported chronic health conditions such as heart disease, diabetes, or cancer.

By 2005, the average physical activity had increased slightly but remained very low overall. Participants walked briskly for just one hour per week, on average, and biked for only about 18 minutes per week. Meanwhile they sat around the house for about 2.5 hours a day.

Current guidelines recommend that adults get at least 30 minutes of moderate-intensity exercise on most days of the week, a goal that many women in the study appear to be well below.

Individuals can't bear all of the blame for that inactivity, Lusk and her colleagues suggest. Their physical surroundings may also be partly responsible.

Although some cities and towns have encouraged walking and biking (by adding sidewalks and bike lanes, for instance), the U.S. remains a "car-centric nation," they write.

"We need to provide the infrastructure or facilities so that more people could comfortably bicycle," Lusk says. "In the U.S., the emphasis has been on the walking environment and not on the bicycling environment."