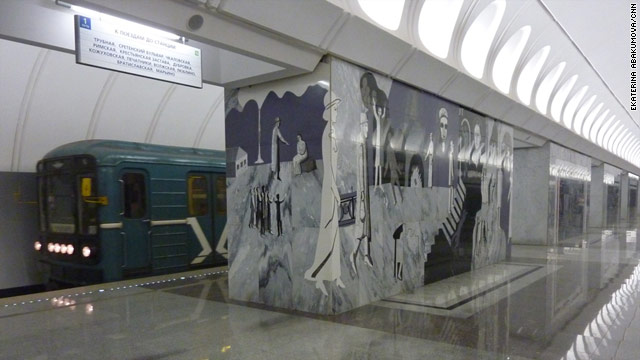 (CNN) -- The Russian capital's shiny new metro station is called Dostoevskaya, after author Fyodor Dostoevsky. But that's not what's getting the buzz in the international press.

The Moscow station has grayscale mosaics depicting scenes from Dostoevsky's stories, which are characteristically dark and violent. One image shows the "Crime and Punishment" protagonist murdering two women with an ax, and another shows a man holding a gun to his head. The latter isn't the focal point of the station; it's one of several artistic renderings of Dostoevsky's fiction on the walls.

Still, the artwork has been raising eyebrows among mental health professionals and bloggers alike. The question remains: Could this subway station become a place that encourages suicidal behavior?

It is, of course, too early to say what will happen, but having an image of someone with a gun to his head is problematic and could be inviting suicidal behavior, said Madelyn Gould, a psychiatrist at Columbia University.

"You certainly don't want to do anything that might in any way contribute to someone's motivation to die by suicide," Gould said.

Images of suicide, be they in art, cinema or news media, can make the act seem more real to vulnerable people, who have probably been suffering from depression or other mental illness and feel stressed, experts say. Something like the mosaic at Dostoevskaya isn't all bad or good, but it can affect people already at risk, said Nadine Kaslow, a psychologist at Emory University.

"For some people, it can be one more thing that makes them lean in an unsafe direction," she said.

People who have not already felt mentally distressed will probably not be affected by an image of a man with a gun to his head, she said.

Portrayals of suicide, both fictional and nonfictional, have been blamed for deaths by suicide for centuries.

"The Sorrows of Young Werther," a novel by Goethe published in the late 1700s, was implicated in suicides across Europe after its release, according to the World Health Organization. The hero shoots himself because he cannot be with the woman he loves, and many people who took their own lives soon after its publication did so in a similar manner. 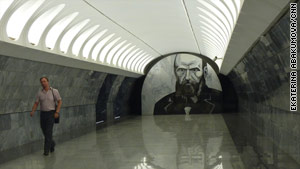 More recently, many systematic studies have found that media reporting can lead to imitative suicidal behaviors and that young people and those suffering from depression can be especially vulnerable.

That's why organizations such as the International Association for Suicide Prevention caution media against describing or showing photographically the specifics of suicide method and location, as these details and images may encourage others to imitate the act. They also warn against glamorizing the suicides of celebrities, which can promote copycat suicides.

A growing body of research has looked at suicide prevention by way of blocking the means of access -- in other words, restricting access to a method that someone might use in taking his or her own life.

A study published this week in the British Medical Journal examined the effect of putting up a barrier on the Bloor Street Viaduct in Toronto, Ontario, which had about nine suicides a year from 1993 to 2002. The barrier was put up in 2003, and there had not been any suicides there afterward.

Researchers found, however, that the annual rate of deaths by suicide from other bridges went up from 8.7 to 14.2, suggesting that some people who might have taken their lives at the Bloor Street Viaduct may have merely found other places to do so.

But other suicide experts say barriers are crucial.

It's important to note that the Toronto study was very small, and it is impossible to draw conclusions from it, said Matthew Miller, associate professor at the Harvard School of Public Health, who co-wrote the editorial that accompanied the study.

There have been many instances in which lives have been saved by restricting access to a culturally acceptable method of suicide, Miller said.

When domestic gas was detoxified in England and Wales in the 1960s and early 1970s, there was a drop in the suicide rate of about a third, researchers have argued.

However, a 2000 study led by David Gunnell at the University of Bristol suggested that some people may have turned to drug overdoses instead, with those rates rising at the same time that suicides by gas decreased from 1973 to 1975.

There is also evidence that the United Kingdom has had success reducing suicide attempts involving the pain reliever acetaminophen, also called paracetamol, by restricting the number of tablets of medication that could be sold in a packet, Gould said.

"Saving lives in the short run by making it harder for people to die when they make an attempt saves lives in the long run," Miller said. "People can then get the help they need once the crisis has passed."

While some people will simply turn to other methods, suicidal behavior is generally impulsive, and motivation waxes and wanes, Gould said. Any method of deflecting a person thinking about suicide can buy valuable time that may allow him or her to reconsider.

But Kaslow cautioned that there is a broad range of impulsivity among people who are vulnerable to suicide, and some deaths are quite premeditated.

The emphasis, she said should be on reducing stigma about mental health problems so that more people get the help they need.

"If they get appropriate treatment, they don't feel as suicidal, and they're less likely to kill themselves, and that should be the first thing we do," she said. "That's going to matter more than blocking off hot spots."

If you or someone you know needs help, call the National Suicide and Prevention Lifeline at 1-800-273-8255.