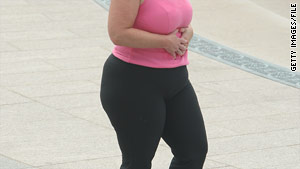 Memory loss in later life is more pronounced in women who carry excess weight around their hips, a study says.
STORY HIGHLIGHTS

(CNN) -- A woman's body shape may play a role in how good her memory is, according to a new study.

The more an older woman weighs, the worse her memory, according to research released this week from Northwestern Medicine at Northwestern University in Evanston, Illinois.

The reason pear-shaped women experienced more memory and brain function deterioration than apple-shaped women is likely related to the type of fat deposited around the hips versus the waist.

Scientists know that different kinds of fat release different cytokines -- the hormones that can cause inflammation and affect cognition.

"We need to find out if one kind of fat is more detrimental than the other, and how it affects brain function," said Dr. Diana Kerwin, the lead author of the study and an assistant professor of medicine and a physician at Northwestern Medicine. "The fat may contribute to the formation of plaques associated with Alzheimer's disease or a restricted blood flow to the brain."

The study published in Wednesday's Journal of the American Geriatric Society said, on average, there is a one-point drop in the memory score for every one-point increase in body-mass index -- a ratio of a person's height and weight. The study included 8,745 cognitively normal, post-menopausal women ages 65 to 79.

"Obesity is bad, but its effects are worse depending on where the fat is located," Kerwin said.

"The study tells us if we have a woman in our office, and we know from her waist-to-hip ratio that she's carrying excess fat on her hips, we might be more aggressive with weight loss," Kerwin said. "We can't change where your fat is located, but having less of it is better."