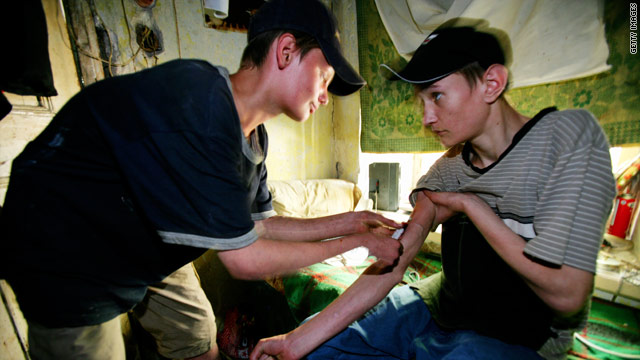 (CNN) -- Growing numbers of vulnerable children across Eastern Europe and Central Asia are at risk of dying from AIDS, with widespread drug use and the sex trade contributing to an "underground HIV epidemic," UNICEF warned on Monday.

The former Soviet states, from Baltic Russia to Tajikistan in Central Asia, and parts of the Balkans remain the only regions of the world where rates of HIV infection continue the rise, according to the UNICEF report, released at an international HIV/AIDS conference in Vienna, Austria.

"Today, street children in the region are dying of AIDS and drug use in much the same way as they died of cold, famine and typhoid in the twentieth century," claims the report, entitled "Blame and Banishment."

Newly diagnosed HIV cases increased by eight percent in Russia in 2009, by 10 percent in Georgia and by 22 percent in Belarus, according to figures released last week by the Joint United Nations Programme on HIV/AIDS (UNAIDS). Some parts of Russia have experienced a 700 percent increase in rates of infection since 2006, UNICEF says.

"There's an unwillingness to acknowledge that there are young people and minors involved in these behaviors," said Ferencic, a co-author of the report.

"We hope to raise attention to the issues affecting children and young people who are either vulnerable, engaging in risky behaviors or already living with HIV and AIDS. These children need special support and services that reach them."

UNICEF said that street children and children in poverty were particularly at risk with a third of new cases of HIV infection affecting the 15-24 age group. Recent research suggests up to 40 percent of homeless children in the Russian city of St. Petersburg could be infected with the virus.

The problem of street children has increased since the collapse -- along with the entire Communist system -- of state institutions for orphans and neglected children in the early 1990s and the subsequent Russian economic crisis, the report says.

While there are no reliable estimates of the number of children living on the streets, experts reckon up to one million across the former Soviet bloc are currently fending for themselves.

For many, that also means exposure to drugs with around 3.7 million people in the region estimated to inject drugs -- a quarter of the world's total. One in four of those are estimated to be HIV positive. Many vulnerable adolescents also end up working in the sex trade, further exposing themselves to the risk of contracting HIV.

In the study in St. Petersburg, more than half of 319 participants aged 15 to 19 had experience of injecting drug use and 96 percent were sexually active with a quarter having had more than six sexual partners per year.

"Children and adolescents living on the margins of society need access to health and social welfare services, not a harsh dose of disapproval," said Lake.

Even when established, many outreach programs struggle to win the trust of vulnerable groups with one adolescent female sex worker at an HIV prevention center in Tajikistan telling researchers she had initially feared the offer of a free medical checkup and condoms was a police trap.

Michael Sidibe, Executive Director of UNAIDS, said he was also concerned that some countries appeared to be cutting investment in HIV programs, especially those targeting injected drug users.

"Epidemics driven by injecting drug use can grow rapidly when HIV prevention services are not available," said Sidibe. "Eastern Europe can not lag behind in the prevention revolution. Evidence shows unequivocally, harm reduction programs save lives and are a smart investment."

Sidibe also said the spread of HIV/AIDS in eastern Europe and Central Asia could not be broken without "empowering and protecting" children and adolescents.

"We must not rob them of their childhood," he said. "It is our responsibility that they have access to HIV prevention and treatment services."

Speaking to CNN on Monday in Vienna, former U.S. president Bill Clinton urged countries not to give up on funding AIDS programs, warning that the consequences would be "calamitous."