Why I write 'Empowered Patient' 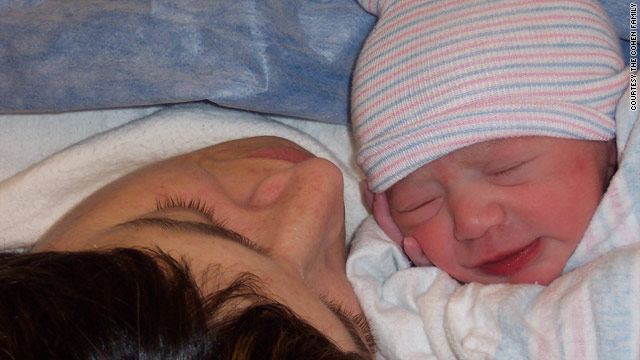 (CNN) -- Four days after giving birth, amped up on a combination of hormones and anxiety, I gathered together what was left of my stomach muscles and wrenched myself out of bed. Throwing on a bathrobe, I dragged myself to the neonatal intensive care unit.

My newborn baby Shir was there because when she was 48 hours old, as I held her in my arms, she had seizures that had turned part of her face blue. A nurse whisked her to the NICU, where a team of neurologists, cardiologists, hematologists and infectious-disease experts tried to figure out the cause of her seizures.

Fearing it could be a life-threatening infection, they'd given her a spinal tap, sticking a needle into her tiny spinal column to retrieve fluid. It was horrible for my husband and me to think of her going through such a procedure, but we knew it was necessary.

Then, the night before my early morning trip to the NICU, the pediatric neonatologist had called us with good news. Shir didn't have an infection, and he would immediately stop the spinal taps. My husband went home to take care of our two other daughters, and I went to sleep in my hospital room, relieved that Shir wouldn't need any more spinal taps.

But when I arrived at the NICU, I was in for a huge shock.

The NICU nurse told me that just an hour before, Shir had received another spinal tap. Horrified, I told her the doctor had ordered the spinal taps stopped. Surely they'd received those orders?

The nurse checked the chart. "There were no orders last night," she told me. Then it got even worse. "That spinal tap they just gave her didn't work. They got the needle into her spine, and they tried, but they couldn't get any fluid out because she's dehydrated. They'll try again in an hour."

I couldn't believe what I was hearing. Not only had my baby had one unnecessary spinal tap, but now she was about to have another. I had to stop them. I had to become an empowered patient.

An empowered patient is born

As the daughter and granddaughter of physicians, I enjoyed excellent medical care in the small community where I grew up. I had no idea things could go so wrong.

But through my experience with Shir, I learned how broken the system is, and in July 2007, about a year after Shir's birth, I started the "Empowered Patient" column on CNN.com. Every week, the Empowered Patient team -- myself, Senior Producer Jennifer Bixler, Producers Sabriya Rice and John Bonifield, and our Senior Editor Mary Carter -- explain to you how to advocate for yourself and your family to get the very best medical care possible.

Next week, my book "The Empowered Patient" will be coming out, based partly on the columns.

Over the past three years, I've learned how broken our system really is.

About 99,000 people die each year from infections they acquire in the hospital, according to the Centers for Disease Control and Prevention.

Nearly as many die from medical errors in hospitals, according to an Institute of Medicine report. When you see the doctor, studies tell us, the diagnosis will be wrong as many as one out of four times, according to a report by the Agency for Healthcare Research and Quality.

One out of 14 times that you have an abnormal test result, the doctor will fail to let you know, according to a study published last year in the Archives of Internal Medicine.

While these statistics are disturbing, I've been inspired by people who have fought for better care for themselves and the people they love. There's Suzanne Atryzek, who practically threw herself on the hospital bed when a nurse refused to give her daughter an anesthetic before a painful procedure. There's Albert Wu, who had to step in and stop a nurse from giving his wife a double dose of a medication. There's Trisha Torrey, who was diagnosed with a particularly frightening form of blood cancer, and then figured out on her own it had all been a mistake and she didn't actually have cancer.

Don't get me wrong: I think the United States has some of the best health care in the world, and my family and I have been grateful recipients on many occasions. But as I learned that morning in the NICU with my daughter, sometimes things go wrong and it's up to you to make them right.

That morning with Shir, I tried to be an empowered patient, explaining to the nurse that the night before, the neurologist had made an order to stop the spinal taps. No matter how much I argued, there was nothing I could do to convince this nurse that Shir didn't need yet another unnecessary spinal tap. The nurse said I had to leave and ushered me out of the NICU.

Back in my hospital room, sobbing, I felt I had failed my daughter. Nurse after nurse came in to find out what was wrong, but I was crying so hard I couldn't get even a syllable out. Finally, a nurse named Sarah managed to calm me down enough so I could tell her what had happened.

To this day, I have no idea what Sarah said, but within minutes I received a call from one of the neonatologists saying there would be no spinal taps. Finally, I had managed to protect my daughter. Through my tears, I'd been an empowered patient.