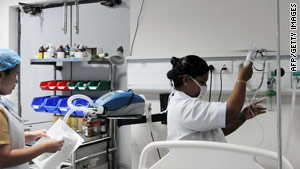 New Delhi, India (CNN) -- India has rejected findings of British scientists about a new form of drug-resistant "superbug" infecting patients who have traveled to the South Asian nation for treatment.

The Indian health ministry insisted in a written statement Thursday that such organisms were present universally.

"[T]his is a phenomenon which occurs in nature -- in the environment, may be intestines of humans and animals universally. There might be billions of such happenings at any moment," the ministry said.

Health authorities in the country, seen as a cost-effective destination for foreign medical tourists, claimed similar plasmids have been reported from the United States, Israel and Greece as well.

"While such organisms may be circulating more commonly in the world due to international travel but to link this with the safety of surgery hospitals in India and citing isolated examples to show that due to presence of such organism in Indian environment, India is not a safe place to visit is wrong," the ministry said.

It also objected to the naming of the superbug as New Delhi metallo-lactamase-1 and dismissed claims Indian hospitals were not safe for treatment.

The medical journal, The Lancet, said this week that tourists seeking treatment in Asia are bringing home a dangerous type of bacterial infection that's resistant to nearly all known antibiotics.

Doctors identified 29 patients in the United Kingdom with the new infections. Most had traveled to India, Pakistan or Bangladesh for medical procedures, including elective cosmetic surgery. Dozens of patients from Asia also got the infections, according to the researchers from Cardiff University.

The new strains appear to be widespread in south Asian medical centers and have also been spotted in Canada, Australia, the Netherlands, Sweden and the United States. In June, the U.S. Centers for Disease Control and Prevention (CDC) flagged three cases where patients were infected with bacteria carrying the NDM-1 gene. All had undergone medical care in India.