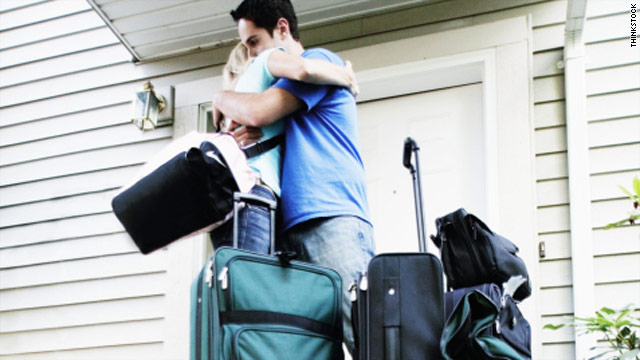 Experts advise parents against picking up their children from college if they complain about homesickness.
STORY HIGHLIGHTS

(CNN) -- There was nothing but excitement for Keila Pena-Hernandez when she first stepped onto the grounds of the University of Missouri.

New school. New city. A new phase of her life. "It's just like wow, wow, wow! I was just excited that I'm in new surroundings," she said.

By the third week, the novelty of her new surroundings had worn off. The then 27-year-old health informatics doctoral student from Puerto Rico found herself lying on her bed after classes with the lights turned off and gazing out the window into the sky. All she could think of were the faces of friends and family.

"I started feeling homesick," she recalled. "This is nice, but this is not really home. The gym is awesome, but I didn't know anyone here."

This month, as thousands of freshmen and graduate students flock to colleges to begin a new academic year, many will be leaving home, some for the first time.

As routines are replaced with new social and academic pressures, and home by a dormitory full of strangers, homesickness -- the longing ache for the familiar, friends or grandma's cooking -- sets in. Pena-Hernandez knows all about that; she's felt it since she left home in 2004.

Homesickness is nothing new. It is mentioned in the Bible's Old Testament book of Exodus and Homer's "Odyssey," and happens to just about anyone away from home -- athletes and actors alike. ("Twilight" star Robert Pattinson reportedly told a U.K. magazine he misses home badly.)

Even so, only lately has there emerged a clearer sense of what homesickness is -- a distinct adjustment disorder with identifiable symptoms -- and what causes it.

In a paper co-written by Chris Thurber and Edward Walton published in Pediatrics, the journal of the American Academy of Pediatrics, homesickness is defined as "distress and functional impairment caused by an actual or anticipated separation from home and attachment objects such as parents."

Those who suffer from the condition feel some form of anxiety, sadness and nervousness, and most distinctly, obsessive preoccupation with thoughts of home, Thurber said. 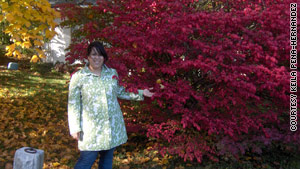 After Keila Pena-Hernandez came to the University of Missouri, she began missing friends and family in Puerto Rico.

Pena-Hernandez craved the tropical fruits of Puerto Rico and the cool sea breeze.

"Lakes or rivers in the Midwest do not compare to the Caribbean Sea," she said.

Also troubling was the sense that her loved ones had moved on without her.

"A lot of my friends got married, had children and I'm not part of that because I'm not physically there, so you feel like you're losing out."

Yet despite the way it's coined, homesickness isn't necessarily about home. And neither is it exactly an illness, experts said.

Instead, it stems from our instinctive need for love, protection and security -- feelings and qualities usually associated with home, said Josh Klapow, a clinical psychologist and associate professor at the University of Alabama's School of Public Health. When these qualities aren't present in a new environment, we begin to long for them -- and hence home.

"You're not literally just missing your house. You're missing what's normal, what is routine, the larger sense of social space, because those are the things that help us survive," Klapow said.

He offered another way of approaching homesickness: It's merely an emotion that comes in waves. "Very few emotions stay with you all the time, they come and they go," he said. But when it strikes, both children and adults often get caught off guard by it, he added.

"They think something's terribly wrong. But it's normal and adaptive to feel homesick for some period of time. It's just your emotions and mind telling you you're out of your element."

ADVICE FOR PARENTS
Parents, here's how not to make matters worse:

1. Avoid expressing anxiety. Your homesick freshman is not your sounding board. Instead of saying how much you miss him, express optimism about the experience your child is going through.

3. Find a friend. Encourage your child to look for friends and the support of a trusted adult. This can help ease the transition.

4. Don't make a deal. Promising to pick your child up if homesickness sets in only decreases your child's likelihood of success in the new environment.

That homesickness is a spontaneous emotion also means both adults and children will feel its effects, Thurber said.

"If you look at an 8-year-old boy or girl at summer camp, and an 18-year-old university freshman, you would see very similar symptoms," he said. "The same would be true for a 28-year-old going to medical school in a different country."

Thurber said he has observed few differences in the length and intensity of homesickness between males and females.

While the cloud often lifts after a few weeks, "the distress and level of impairment among some homesick persons can become extreme," according to Thurber's report published in 2007.

In his study of homesickness among children, about 9 percent have it so bad that "it is associated with strong feelings of anxiety and depression, maybe even clinically significant symptoms," Thurber said.

"When homesickness is really bad, it's hard for people to eat, sleep or interact with others. That's terribly rare, but it does sometimes happen."

Age can play a crucial difference in coping with homesickness.

When you're 8, you don't have a lot of formal operational thought nor hypothetical thinking, said Thurber, so being away a month can seem like forever. But an 18-year-old is more likely to be able to translate that into a more manageable time frame.

"You'd be making comparisons in your head: That means if I do laundry once a week I do it four times. That changes and as people's concept of time becomes more sophisticated, so does the quality of their coping," Thurber said.

"It turns out, [homesickness is] the very thing that inoculates against a future bout of homesickness," Thurber said. "By living through a difficult separation, your mind forces itself to cope."

It's this reason why experts advise parents against helicoptering their children out of college if they complain about homesickness.

"It's kind of like a bailout," said Ruperto Perez, director of the Georgia Institute of Technology's counseling center. Students end up being robbed of picking up problem solving and time management skills.

If there's any sort of deal parents can make, it is to agree to stop communicating -- be it text messages or via e-mails -- with their freshmen every five minutes.

Instead, Klapow said, parents should schedule a specific time, once a week, to contact their children. It also allows space and time for college students to make strong social connections among their peers -- perceived absence of social support was a strong predictor of homesickness, according to Thurber's report -- and gain much-needed independence.

Perez said this can be crucial in this day and age in which children have become more and more reliant on their parents. "There is more of an uncertainty of how to be independent. Probably because parents have provided more for them, for a longer period," he said.

While homesick kids at summer camp have the supervision of counselors, college students have less of that.

TIPS FOR HOMESICKNESS
Here are tips that might help if you're experiencing homesickness:

1. Stay engaged. Take part in college activities or even freshman camps to forget about homesick feelings and make new friends.

2. Establish a personal routine. "If you are someone who goes to bed early and everyone's staying up late, it's OK to go to bed early," says psychologist Josh Klapow.

3. Do something to feel closer to home. Write a letter, look at a family photo.

4. Talk to someone. Seek out people who either understand what you're going through or have similar feelings. Pity parties in this case aren't a bad thing, says Klapow. "It's sort of like a grief support group."

Colleges have been hypervigilant for signs of depression and anxiety particularly after the Virginia Tech shootings. Counseling centers such as Perez's are taking steps to increase the awareness of the help students can turn to by promoting their services at orientation sessions and working with faculty and residential staff.

While there is still a stigma when it comes to approaching a counselor, Klapow said not doing so is as foolish as not consulting a doctor when a student is suffering from, say, stomach cramps.

"For college students, hey welcome to the big world. And the big world says, sometimes your emotions need to be dealt with," he added.

While homesickness can be dealt with, can it be prevented?

Not quite, Thurber said, despite the title of his study, "Preventing and treating homesickness."

"But what you're able to do is change its intensity," he said. Allowing teens and young adults to be active in deciding which college to go to helps.

Then there's practice and preparation.

Practice time away from home, Thurber recommended. Parents, too, can help by working with their freshmen to learn about the new environment by visiting campuses and talking to alumni. "They increase familiarity and, thereby, reduce anxiety," Thurber wrote.

Pena-Hernandez, who is finishing her Ph.D, makes a trip home once a year. She still misses home occasionally, but has the support from more friends and church as well.

We get homesick because "there are things that we love," said Thurber. "It's the byproduct of the strength of our attachment. If there were nothing in the world we were attached to, then we wouldn't miss them when we're away."