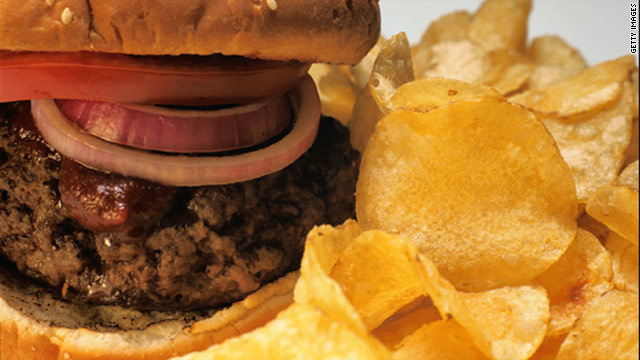 (Health.com) -- Eating too much red meat has long been a no-no for people with high cholesterol and other risk factors for heart disease. But it hasn't always been clear how much is too much.

Now, a new study suggests that you don't have to cut out red meat altogether to improve your heart health. If you eat red meat more than once a day, cutting back to one serving every other day can substantially reduce your risk of having a heart attack or dying from heart disease, the study found.

Replacing the red meat in your diet with other, less fatty sources of protein -- such as nuts and fish -- can lower your risk even further, the researchers say.

Women who eat two servings of red meat per day have a 30 percent increased risk of heart disease compared with women who average three to four servings per week (or half a serving per day), according to the study, which appears in the journal Circulation.

That's a "pretty dramatic increase," says the lead researcher, Dr. Adam Bernstein, a research fellow in the department of nutrition at Harvard School of Public Health, in Boston. Although the study included only women, Bernstein says he would expect the findings to be similar in men.

The study provides a good overview of how red meat consumption can affect heart health, says Suzanne Steinbaum, the director of women and heart disease at Lenox Hill Hospital, in New York City.

"This gives you an understanding of what moderation means," says Steinbaum, who was not involved in the new research. "It gives you something to grab on to."

Some types of red meat appear to be worse for your heart than others. Eating one serving of beef per day increases a woman's heart-disease risk by only about 8 percent, compared with eating it never or rarely. But eating one hamburger, one serving of bacon, or one hot dog per day ups a woman's risk by 42 percent, 41 percent, and 35 percent, respectively, compared with eating those foods once or twice a month (if ever), according to the study.

The saturated fat in meat may only be partly to blame. Iron and other minerals found in red meat may contribute to heart-disease risk as well, Bernstein says. (Consuming high-fat dairy items -- such as ice cream, sour cream, and butter -- also increased the risk of heart disease in the study, but less so than red meat.)

Bernstein and his colleagues followed roughly 85,000 middle-aged women for an average of 26 years, during which time 2,210 of the women had heart attacks and 952 died from heart disease. The women were all nurses, and were part of a long-running study on health behaviors that included lengthy diet questionnaires given every four years. To zero in on the link between diet and heart health, the researchers took into account other health factors, such as body mass index, smoking, alcohol consumption, and exercise.

Replacing red meat with healthier sources of protein will go a long way toward reducing heart risk, the researchers say.

Though these are estimates, they represent the first time that researchers have been able to quantify the heart benefits of these food swaps.

"We know that red meat is not as good as other protein sources," says Karen Congro, a registered dietitian at the Brooklyn Hospital Center, in New York City. "Now we actually have the numbers to put next to them."

The study "doesn't mean that red meat is a horrible thing," says John Bisognano, the director of outpatient cardiology at the University of Rochester Medical Center, in New York. "People like to eat, and all you can hope to do is shift them a little bit away from foods that may have less of a benefit to them to those that have more of a benefit to them."