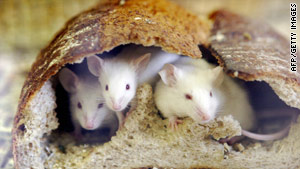 The researchers found that the blood of 32 of 37 patients (86.5 percent) diagnosed with CFS contained murine leukemia virus-related viruses (MLVs). But when they looked at healthy blood donors, they found that just three of 44 (6.8 percent) had the viruses, which can cause leukemia or cancers in mice.

"Further studies are needed to determine whether the same strong association with MLV-related viruses is found in other groups of patients with CFS, whether these viruses play a causative role in the development of CFS, and whether they represent a threat to the blood supply," the authors concluded in their study, which was published in the Proceedings of the National Academy of Sciences.

CFS is a complex illness whose cause is not known and for which no diagnostic test or approved treatment exists. Despite the fact that Monday's study finds no more than an association, researchers from France and Canada suggested in an accompanying commentary that there is enough evidence to support initiating trials to see whether antiretroviral drugs like those used to treat the virus that causes AIDS might help people who have both chronic fatigue syndrome and are infected with MLV.

The possible link emerged last year when DNA from a similar virus -- called xenotropic murine leukemia virus-related virus (XMRV) -- was found in blood from two-thirds (67 percent) of 101 CFS patients versus eight of 218 (3.7 percent) of healthy controls.

"Very good laboratories have come up with disparate results," Alter said. "We think there are reasons for this. We think it's in the patient populations rather than in the laboratory testing, though the latter has not been completely ruled out."

Monday's study underscores how messy science can be. "These results do raise as many questions as they answer," said Dr. Steve Monroe, director of the division of high-consequence pathogens and pathology at the Centers for Disease Control and Prevention. "Clearly, the different findings from different laboratories now that have been reported suggest that there are still a lot of things about this virus that we do not know."

And researchers are looking for ways to protect the blood supply from possible contamination. But a study looking for virus in donated blood is under way. In addition, the Food and Drug Administration requires that blood donors be in good health at the time of donation. And the AABB, a blood-banking organization, recommends that people diagnosed with CFS be discouraged from donating blood or blood components.