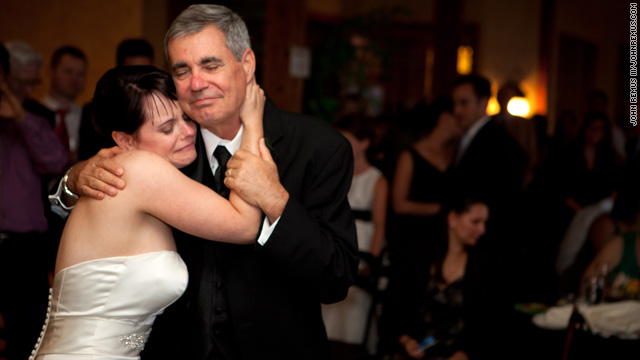 Dr. Sanjay Gupta joins a star-studded lineup for Hollywood's "Stand Up 2 Cancer" on Friday and then takes you backstage on this weekend's "SGMD," Saturday-Sunday 7:30 a.m. ET

(CNN) -- Almost a year to the day after learning he had the deadliest form of brain cancer, Steve Holl was dancing at his daughter Eryn's wedding.

"To have my dad there was just one of those moments where you really want to stop time," Eryn Holl says. "You want to look at him and hold on tight."

Fewer than one in three patients with Holl's type of cancer, a glioblastoma, have traditionally survived a year, let alone been well enough to dance.

But Holl, 61, has something going for him beyond radiation and chemotherapy -- a custom-made vaccine.

Holl (pronounced Hall) received the vaccine as part of a clinical trial at the University of California San Francisco.

"The approach that we take is we actually do the surgery. We take the tumor out, and then we make the vaccine directly from that individual patient's tumor. And then give that vaccine back to the patient," says Dr. Andrew Parsa, who heads the trial.

Glioblastomas have been particularly deadly because no matter how skilled, neurosurgeons cannot remove the entire tumor. Some cancer cells remain hidden in the brain and eventually grow back -- usually within months. It's in the family of brain cancers that claimed the life of Sen. Ted Kennedy.

So far, Parsa's ongoing clinical trial is beating those odds. More than a year into the trial, none of the eight patients who have received vaccines made from their tumors has seen cancer return.

"It's really, really encouraging," Parsa says, adding that it's too early to draw any big conclusions.

The vaccines are designed to alert the body to cells that don't belong and trigger the body's immune system to attack multiple points on the cancer cells.

How many vaccine doses patients receive depend on how much of the tumor surgeons are able to remove. Holl had the first of 14 vaccine doses in February.

Using a vaccine to fight cancer makes sense to Holl, a biologist who lives in Folsom, California.

"Smallpox works, polio works," says Holl. "You're allowing your own body to combat the cancer, which is an irregularity anyway."

Parsa envisions someday treating glioblastomas as a chronic disease, rather than a death sentence.

"I don't think that it's appropriate to use the word cure with glioblastoma. We really want to turn this into a chronic disease like hypertension or diabetes that allows you to take medicine to live a normal life," he says.

Parsa's research is being funded by a combination of federal grants and donations from advocacy groups such as the National Brain Tumor Society.

"This trial would not have happened without the support of patient advocacy groups," Parsa says.

In addition to UCSF, Columbia University and Case Western Reserve University are also testing the vaccine, and the clinical trial may expand to more hospitals.

In the past month, Holl has walked Eryn down the aisle and celebrated his 36th wedding anniversary. He is upbeat about the future.

"I'm really hopeful that the vaccine works and I can get another 20 years of life," Holl says.