Moving out of state to get autism treatment 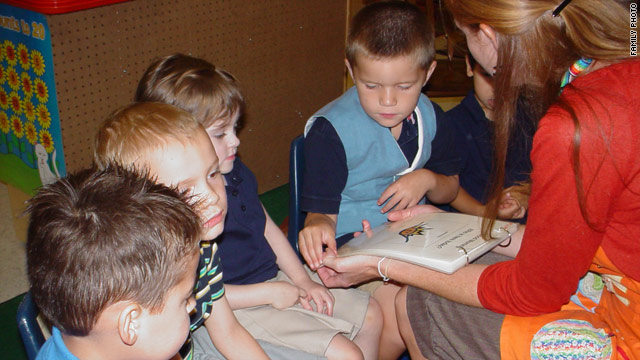 Max Finn, in blue vest, is thriving in Florida, where his parents moved to get him appropriate therapy.
STORY HIGHLIGHTS
RELATED TOPICS

(CNN) -- Before Wendy Radcliff agreed to marry Scott Finn, she made it clear they would have to live in her home state of West Virginia.

Politically active, Radcliff loved West Virginia and wanted to spend her life there, helping to make it a better place. The couple married, had a son, Max, and built their life together in Radcliff's hometown of Charleston.

Then, just before his second birthday, Max was diagnosed with autism.

Radcliff had insurance -- good insurance, she says -- through West Virginia's Public Employees Insurance Agency, which she received through her work for the state. But although PEIA paid for the autism diagnosis, it would not pay for the prescribed treatment -- applied behavior analysis, or ABA. There are a similar models that go by different names, but ABA is by far the best-known.

ABA is typically administered one on one, in a program that is customized to the individual. It involves breaking down learning tasks into small steps, and teaching them over and over in a reinforcing way until they are mastered.

It is the best-researched and most effective current treatment for autism, experts say.

"Our credit cards were being used to pay for things that they shouldn't be paying for, like groceries and utility bills, because we were spending any cash we had on our therapists," says Radcliff.

And even then, they struggled to get the right therapy, Radcliff says.

"In West Virginia, because insurance will not cover ABA, it's very difficult to find people that know and are trained in how to do ABA -- they're just not available and around because of that," says Radcliff.

"We only knew of a couple of ABA therapists even in the Kanawha Valley where we lived. And [they] were being overused by people -- they just didn't have enough hours in the day."

Research suggests any child with autism, regardless of severity, has an equal chance at "best outcome" if the child completes an ABA program (average is three years to completion) that starts before the age of 3 1/2, says Kristi Oldham, program director for the Lovaas Institute Midwest Headquarters in Minneapolis, Minnesota, which provides early intervention services for kids with autism.

Sixty-seven percent of such children can expect a "best outcome," which Lovaas defines as a child who is mainstreamed in a classroom without additional support, has no diagnoses on the autism spectrum and has a typical IQ, Oldham says.

And yet PEIA, like many insurance companies across the nation, does not cover the treatment for kids diagnosed with autism.

As for the reason, PEIA Director Ted Cheatham says simply that is policy of his organization.

Lorri Unumb of Autism Speaks, which advocates nationally for autism legislation, says there is no compelling reason for insurance companies not to cover ABA.

"ABA is the most commonly prescribed treatment protocol, and that's the one insurance companies are wholesale denying. And the typical reason is that it is experimental or investigational," says Unumb.

ABA therapy has been used on kids with autism for 40 years, says Unumb. "Who defines experimental? Because that sure doesn't sound like experimental to me."

"The insurers define experimental, and that's the gist of the problem," says Unumb.

Time is of the essence when treating kids with autism, and Max's parents knew that time was running out for them in West Virginia.

Faced with huge financial pressures and not wanting to miss their treatment window, Radcliff and Finn did what many autism parents do: They moved to a state where autism anti-discrimination legislation had been passed. Finn had a job opportunity in Florida, and they jumped on it.

Although the details of the legislation vary by state, all "autism anti-discrimination legislation," as it is called by advocates, compels insurance companies to cover ABA treatment for children with autism.

Twenty-three states have so far passed such legislation, and a controversial version of the bill is due on New York Gov. David Paterson's desk later this month, according to his office.

Jennifer Saunders of the National Conference of State Legislatures says lawmakers have started to sit up and take notice.

"We've definitely seen an increase in the number of bills that have been introduced in the last few years related to autism [insurance mandates], and so I think it's been a growing issue for states -- or at least they've become more aware of it," Saunders says.

Susannah Poe, an associate professor at West Virginia University's School of Medicine and an expert on autism who advises the West Virginia legislature, says a bill is even gaining momentum in her state.

"This is our fourth year working with the state legislature toward this insurance, and this is the first year I feel hopeful that we will see it through. The legislators on the joint judiciary subcommittee are very well-versed about the need and have welcomed our efforts to provide them with critical information," says Poe, who spoke to the committee on Tuesday.

Relief is what the couple felt most when they moved to Florida, says Radcliff -- relief that Max was finally getting the therapy he needed to make a difference in the pivotal early years of a child with autism. And relief that they were not going to go broke paying for that treatment.

Because insurance covers ABA treatment for autism in Florida, a whole infrastructure has grown up around providing those treatments. Max now gets the ABA treatment he needs from qualified ABA therapists.

"There are a lot more people here that know and understand ABA and what that means and know the scientific background behind it and so the school system is much more prepared," says Radcliff. In fact, Max is enrolled in a pre-K classroom specifically oriented for kids with autism.

There are still frustrations, and there is the co-pay for every therapy session -- it recently went up from $25 to $40 -- but it is much better than West Virginia, says Radcliff.

"We both had good jobs and we had good insurance when we lived in West Virginia and we know and knew about the fact that ABA works. ... I wish I didn't know that it works so well, 'cause maybe I would be more willing to not have it."

Though she misses her home state, Radcliff has no regrets about leaving.

"I feel like that show '24' -- like there's this clock ticking somewhere in the background of my life all the time of where I'm trying to get him the help that he needs before it's too late. I think we just felt that we didn't have the time to wait on our state to catch up."