Why your job is making you depressed 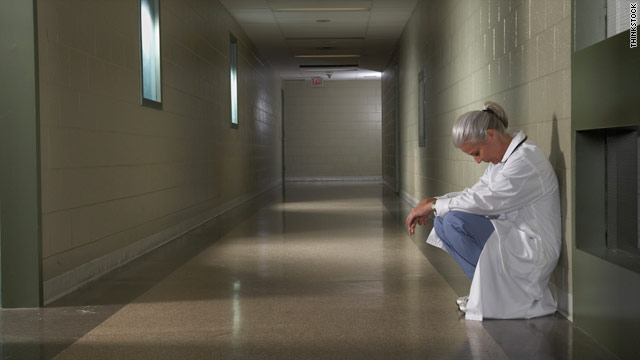 (Health.com) -- Dr. Greg Couser, M.D., is the medical director of the employee assistance program at the Mayo Clinic in Rochester, Minn. He also holds a handful of other titles, including two that begin with director or assistant director. Needless to say, his job is demanding, but he typically doesn't get too stressed out. Why?

Because he has a lot of control over the demands that are placed upon him and "an understanding employer" that gives him the time he needs do his job well. Not everyone is so lucky.

Most people in today's economy are happy just to have a job -- any job. But work-related factors like long hours, a poor relationship with your boss, and lack of control over daily tasks -- factors that can get worse when the boss is pinching pennies -- can contribute to depression as well.

Clearly having a job is better than not having one when you really need it. Those who are unemployed tend to have higher rates of depression (almost 13 percent) than those who are employed full time (7 percent).

But research suggests that some jobs can be more depression-prone than others for a variety of reasons, and certain work-related factors are known to be particularly bad for those already struggling with depression.

"A job can be a source of meaning and social support, which can provide a buffer against depression for some people," says Eugene Baker, Ph.D., vice president of employee assistance programs for OptumHealth Behavioral Solutions. "It's a place to go every day and have people to interact with. But if you are unhappy with your job, and it is chronic unhappiness, and you feel powerless to change your situation, these feelings of helplessness can foster depression."

Factors contributing to depression include genetics, gender, temperament, and lack of social support. And each year, more than 18 million American adults will experience some form of depression.

Certain occupations seem to have a higher risk of depression than others. The highest rates of worker depression (up to 11 percent) are seen in people with jobs in nursing home/child care, food service, social work, and health care, among others.

Gender also plays a role. For all types of occupations, women have higher rates of depression than men. Women working in the food industry have the highest rate of depression (14.8 percent), while men in the arts, entertainment, sports, and media are more likely to be depressed (6.7 percent) than those in other careers.

Experts have some theories as to why some occupations are more depression-prone than others.

Occupations with both high demand and low control over daily tasks are known to cause stress. Couser notes that stress can be a positive force and help increase productivity, but after a certain point it can become detrimental.

"In general, you can have a demanding job and if you are able to have control over factors such as the work pace it can be more manageable," he says. "But if you are at the bottom of an assembly line and things are coming at you at a rapid pace you don't control, eventually you can't keep up."

This is seen in industries that rank at the top of the list like nursing homes and food service. Working in a nursing home is an important job, and it can be quite demanding because employees may be short on resources and autonomy, Couser says.

The same demand/control issues can be found in many of the other jobs on the list, including child care, food service, medicine, education, and administrative support.

There are also other factors that contribute to job dissatisfaction and depression, regardless of specific career.

Jobs with long hours or shift work, which comes with irregular sleep schedules, can be problematic for people with depression, says Deborah Legge, Ph.D., a licensed mental health counselor from Buffalo. Hostile work environments, including those that are unpredictable or seemingly unsafe, can also "destabilize" people who are at risk for mental illnesses, she says.

Troubled relationships with coworkers and bosses can also cause undue stress, says Dr. Adam Kaplin, M.D., Ph.D., assistant professor of psychiatry and neurology at the Johns Hopkins University School of Medicine, in Baltimore.

"We spend so much time there [at work], working with someone who is a good match is so important," he says. "Having a boss you get along with is often more important than salary or other factors -- a lot of people will take pay cuts to work for people they admire or that inspire them."

Christopher Willard, Psy.D., a clinical psychologist at Tufts University and author of Child's Mind, says that jobs that isolate people or are too repetitive or sedentary could pose problems. For example, working at home sounds great in theory, but telecommuting doesn't provide the stabilizing routines and social interaction of an office environment.

People in some occupations, such as lawyers, judges, or police officers, are exposed to the worst human behavior; these negative experiences can alter your perspective on the world and be difficult for people prone to depression, Willard says.

Are there feel-good jobs?

If you suffer from a debilitating mental illness like clinical depression, a career change won't cure you. But there are industries that are less depression-prone than others. According to statistics from the 2007 National Survey on Drug Use and Health, the jobs with the lowest rates of depression included engineering, architecture, and the sciences (for both men and women).

These types of jobs seem to be less stressful because in professions like engineering, workers have more control over how and when the work is completed, Baker says.

Willard adds that other job-related factors that can decrease the likelihood of depression include working in occupations that offer some physical movement, interaction with people, variety, and a sense of accomplishment.

"Most importantly, the happiest job is the one that you find personally fulfilling, challenging, and matches your personality," Willard says. "And if you are stuck in a depressing job, take good care of yourself and find ways to make it feel meaningful to you."

A lot of what is known about jobs and depression is highly individual; some people thrive in high-stress positions that would be toxic for others, Baker says.

It's also true that depression-prone or emotionally sensitive people may be drawn to certain careers, and it's not clear that the job itself elicits symptoms of depression. For example, the creativity that turns people to careers in the arts or writing might also make them more vulnerable to depression and bipolar disorder, Kaplin says.

Other statistics can be misleading, too. For example, suicide is the leading cause of death in young physicians. However, it's possible that young doctors are no more prone to suicide attempts than people in other careers -- they just have the means to do it.

If you are suffering from depression, whether it's job related or not, you can seek help from an employee assistance program. It is a free professional resource that most companies have to help employees deal with issues like stress and depression. Primary-care providers can also be a good resource.

"Depression is treatable and is not a sign of weakness," Baker says. "Reach out to a friend or family member and talk about what is going on."