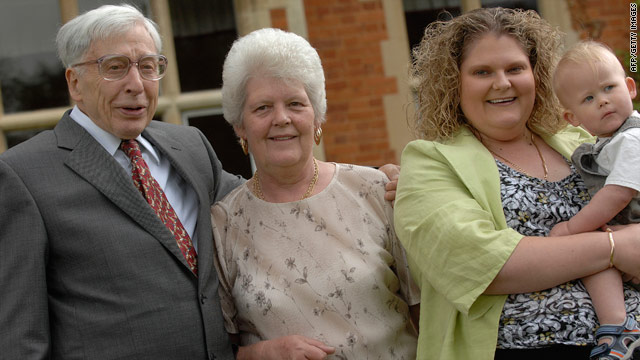 Robert G. Edwards with the first IVF baby Louise Brown (far right) and her mother and son ahead of her 30th birthday in 2008.
STORY HIGHLIGHTS
RELATED TOPICS

(CNN) -- An official with the Vatican criticized the decision to award the Nobel prize for medicine to British doctor Robert G. Edwards for his work on in vitro fertilization, Italy's official news agency ANSA reported Tuesday.

Ignazio Carrasco de Paula, president of the Pontifical Academy for Life, said giving the award to Edwards was "completely inappropriate," according to the news agency.

He said Edwards' work had created a market for human eggs and created problems of embryos being frozen, the news agency said.

Edwards, known as the "father of the test tube baby," won the Nobel Prize for medicine on Monday.

His contributions to developing in vitro fertilization (IVF) "represent a milestone in the development of modern medicine," the award committee said.

"As early as the 1950s, Edwards had the vision that IVF could be useful as a treatment for infertility," which affects about 10 percent of all couples worldwide, the committee said.

"He worked systematically to realize his goal, discovered important principles for human fertilization, and succeeded in accomplishing fertilization of human egg cells in test tubes (or more precisely, cell culture dishes). His efforts were finally crowned by success on 25 July, 1978, when the world's first 'test tube baby' was born," the committee said.

His work has led to the birth of about four million babies, the committee said in praising his work.

The prize is worth 10 million Swedish kronor (about $1.5 million).

Born in Manchester, England, in 1925, Edwards is based at Cambridge University in England.

The announcement marked the beginning of a week of prizes, to be awarded for physics, chemistry, literature and peace. The prize in economics will be announced next Monday.