Where's the line between research and marketing? 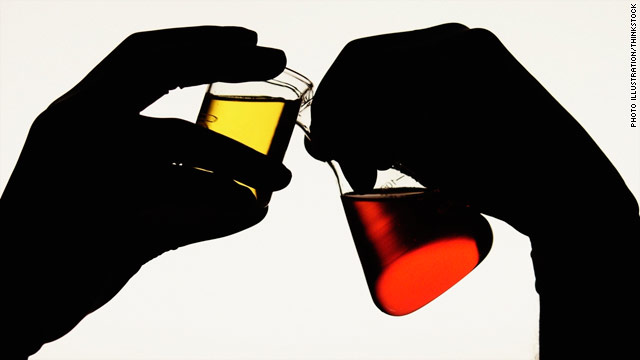 (CNN) -- A weight loss study by Jenny Craig. A survey of sexual health and condom use by Church & Dwight, the company that makes Trojan condoms.

Both have earned attention-grabbing headlines recently and raised questions about what constitutes good research practice.

And they're not the only ones running scientific studies concerning products that they make. Wrigley's has a campaign called Benefits of Chewing based on research regarding gum helping weight management, stress relief and alertness and focus.

"Over the past several years, there has been an increase in research funded by non-pharmaceutical companies," Dr. Phil Fontanarosa, executive deputy editor of Journal of the American Medical Association, said in an e-mail.

JAMA, one of the premier peer-reviewed health publications in the United States, published the Jenny Craig-funded study that had to do with -- surprise! -- women losing weight in the Jenny Craig weight-loss program. The study found that women in the Jenny Craig program lost between three and four times as much weight as those who dieted independently.

Fontanarosa says the study passed the journal's requirements for a privately funded study: the sponsor -- Jenny Craig -- tried to minimize its influence over the management analysis of data and reporting of the findings. An academic investigator had access to all data, and an academic biostatistician conducted the analysis.

"The sponsor had a minimal role in the design and protocol development. By contractual agreement, scientists at the University of California, San Diego, and the other participating institutions had responsibility and independence regarding data management, analysis, and publication," Fontanarosa wrote in an e-mail.

But some experts say the public should have extra skepticism than when viewing the results of a study like this.

"You have to be wary when there's a direct interest between the funder and the topic being studied," says bioethicist Art Caplan at the University of Pennsylvania. "They're unlikely to want to publish it unless they get a positive result that has certain spin that they want to put on the findings to favor the product."

That doesn't mean that the science is necessarily bad; it's just that one should have extra caution in interpreting the results, he said.

A spokeswoman for Jenny Craig said the company would not be able to discuss the study until the print version of JAMA releases it at the end of October.

Journals are there to be a forum for open discussion of findings, primarily among scientists and researchers, said Gary Schwitzer, a longtime health journalist and former CNN medical reporter who critiques coverage of medical news on his website HealthNewsReview. But their content is not sacrosanct, and the quality of the evidence presented within still needs to be evaluated, he said.

But these journal articles form a large chunk of major media coverage of health news, and that can be a problem, Schwitzer said. The disproportionate attention paid to journal articles in the media may give the public false impressions about their significance and reliability, he said.

"I think we do far too many news stories about journal articles when indeed it is not an accurate, representative reflection week in, week out, of progress or lack thereof in research when we know the biases that exist," he said.

What is peer review?

Peer review is the best system that's out there currently for selecting articles for wide publication in journals, but it's not perfect, Schwitzer said.

At JAMA, "peer review" means the paper gets evaluated by at least one JAMA editor with expertise in the relevant scientific field, as well as several external expert reviewers familiar with the subject matter and research techniques and a statistical reviewer. All of the reviewers must report any conflicts of interest they may have with regards to the paper.

But there's still room for flaws in the system, says Michael Kalichman, director of the Research Ethics Program at the University of California, San Diego. Because the scientists are all in the same field, they may have conflicts with each other. Another is that the reviewers see only the final product; if there was a flaw that is not discussed in the paper submitted to the journal, the reviewers have no way of knowing about it.

It's another version of, saying, well, I can hire an actor who's famous to say my product is wonderful.
--Michael Kalichman, UCSD

Studies funded by industry have additional potential dangers, such as making data up -- which is a potential risk in any research, he said. Less malicious in intent, some researchers may fail to see flaws because their priorities are in line with the sponsoring company, he said.

Unlike the pharmaceutical industry, which has government agencies such as the U.S. Food and Drug Administration keeping tabs on it, research that comes from the new industry players such as Wrigley's and Jenny Craig is not tightly regulated, Kalichman said.

Research on published journal articles has found that industry sponsored studies are consistently more positive in their results than those that do not have these ties.

Perhaps more important than the specific source of funding is the methodology and design of an industry funded study, Schwitzer said. Kalichman offers these guiding questions: Did the people in the study know what was being studied? Did they know how they were randomized? How similar were they to the people who did not get the treatment? What steps were taken to eliminate bias?

Pharmaceutical companies have played an active role in sponsoring publication-eligible research ever since the Bayh-Dole Act passed in 1980, Kalichman said.

That law enabled academic institutions, nonprofit organizations and small businesses to retain and negotiate patent rights and licensing on their inventions that came out of their research and development.

That change meant that even if these organizations got federal funding, they could also work with private companies and then negotiate the patent rights later, he said. And, as experts point out, it can be tough to get government money.

"This was a major factor in a shift for many researchers, many academic institutions, to start turning to private money instead of government money," he said. "The result would be that a lot of publications in many fields have that kind of support."

A report in January in JAMA found that the pharmaceutical sector remained the largest source of funding for biomedical research from 2003 to 2008, but medical device firms showed the largest rate of growth (95 percent), with biotechnology firms in second (41 percent), Fontanarosa said.

Non-pharmaceutical companies have learned that they can market themselves in the same way as drug companies: by presenting research about the benefits of their products, said Caplan.

"It's another version of saying, well, I can hire an actor who's famous to say my product is wonderful.'" Kalichman said. "Now you can hire researchers to study your product, and if they find the kind of answer you're hoping for, then they're going to say it's wonderful."

No matter who funds a study, don't be persuaded by any single report, Caplan said. When there are two studies supporting the same trend, that leads more toward facts and knowledge.

"Before I'd head out to the store, I'd wait for the study to be confirmed," Caplan said.