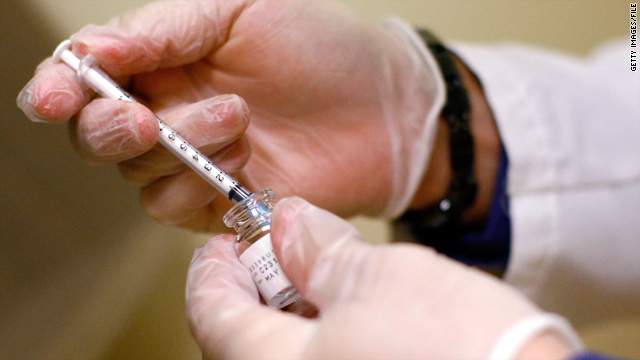 The drug, made by Allergan, Inc., of Irvine, California, was approved last month in Britain for treatment of migraines.
STORY HIGHLIGHTS

(CNN) -- Federal health authorities on Friday approved Botox injections for the prevention of chronic migraines in adults, an advance experts described as "modest."

In a statement, the Food and Drug Administration recommended Botox be injected approximately every three months around the head and neck to dull future headache symptoms.

Experiencing a migraine on most days "is one of the most disabling forms of headache," said Dr. Russell Katz, of the Division of Neurology Products in the FDA's Center for Drug Evaluation and Research. "This condition can greatly affect family, work, and social life, so it is important to have a variety of effective treatment options available."

Migraines, an intense pulsing or throbbing pain in one area of the head, are often accompanied by nausea, vomiting and sensitivity to light and sound, doctors say. Chronic migraines are defined as those that occur on 15 days or more for more than four hours per day.

The drug, made by Allergan, Inc., of Irvine, California, was approved last month in Britain for the same purpose.

The two company-funded studies submitted to the FDA involved 1,384 adults from 122 study sites in Europe and North America. They found that after six months, patients who got the drug experienced 7.8 and 9.2 fewer days of migraine than they had before the studies started. Those who got injections of placebo (sugar pill) experienced 6.4 and 6.9 fewer headache days.

Over those six months, patients on the drug experienced 107 and 134 fewer hours of headache, versus a reduction of 70 and 95 hours for those on placebo, according to the studies.

"The benefits are modest when you look at the overall results," said Dr. Elizabeth W. Loder, associate professor of neurology at Harvard Medical School and the chief of the division of headaches in the Department of Neurology at the Brigham and Women's Hospital in Boston. Loder was involved in an Allergan-funded trial several years ago but has no current relationship with the company.

Still, she added, "It will provide more options for patients who currently have very few forms of treatment available to them ... when you are dealing with a problem like this, even modest improvement can mean the difference between being able to go to work and not being able to function very well."

Dr. Joel Saper, director of the Michigan Head Pain and Neurological Institute and clinical professor of neurology at Michigan State University, said he has been using the drug for that purpose for more than a decade, even though it was not approved for it.

The FDA's approval will likely mean that insurance companies will pick up the tab for it now, he said. Saper, who has also participated in Allergan-funded trials, predicted "certain subsets of people will get dramatic results."

The most common adverse reactions reported by chronic migraine patients being treated with Botox were neck pain and headache, the FDA said.

About 1 percent of patients on the drug (versus 0.3 percent of those on placebo) found that their migraines worsened so much they had to be hospitalized, but it was generally well-tolerated, the company said.

In each study, less than 2 percent of patients dropped out of the study due to an adverse event.

The drug labeling warns that the effects of the botulinum toxin may spread beyond where it is injected, causing symptoms that may include life-threatening difficulties swallowing and breathing.

Botox is sold to doctors in 200-unit vials that cost $1,050, said Cyrstal Muilenburg, spokeswoman for Allergan. Last year, the drug had sales of $1.3 billion, she said.

Doctors gave administered a total of 155 units to each migraine patient in 31 injections into muscles of the head and neck, she said. The treatment was repeated at three-month intervals.

Some 3.2 million Americans are estimated to suffer from chronic migraine, though some 80 percent of them have never been diagnosed as having the disease, the company said.

The World Health Organization ranks migraine as the 19th most disabling disease. Women are three times as likely as men to suffer from migraines, which are also linked to depression and anxiety.

The drug is the same chemical entity that was approved 21 years ago for the treatment of strabismus and blepharospasm, two eye-muscle disorders.

Since then, regulators in some 80 countries have approved it for 21 different indications, including treatment of the abnormal head position and neck pain associated with cervical dystonia in adults, symptoms of severe underarm sweatingand treatment of increased muscle stiffness in elbow, wrist and finger muscles in adults with upper-limb spasticity.

Last month, Allergan settled a Justice Department investigation into its marketing practices related to uses of Botox by paying $375 million and pleading guilty to a misdemeanor misbranding charge.

The company also agreed to pay $225 million to resolve civil claims the department was asserting under the civil False Claims Act.