8 tips for telling your partner a health secret 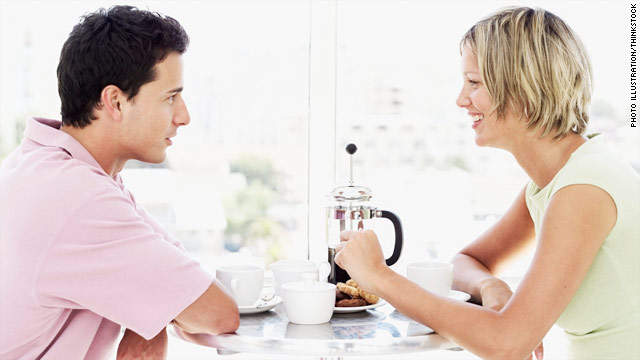 It's possible to reveal a health secret without blurting it out. Tell your date casually and make your delivery drama free.
STORY HIGHLIGHTS
RELATED TOPICS

(Health.com) -- Dating someone new means learning about each other's quirky behaviors, emotional baggage, and the experiences that have shaped both of your lives. But what if this involves a health or medical secret you're hesitant to talk about?

Jill, a 33-year-old from New York City, knows that finding Mr. Right also means telling him that she has bipolar disorder. Though she takes medication to manage her condition, she still lives with residual symptoms: She has trouble sleeping for more than two hours at a time, and can't shake her cigarette habit -- traits that she feels a date might question.

"It's the smoking and lack of sleeping; it's hard to share your life with someone when you need to explain further why you do these things," she says.

Jill knows that she'll eventually have to confess her situation to a long-term partner. "It's something that will affect me if and when I settle down and have children, since I would not be able to take these medicines [while pregnant]," she explains. "It's never an easy thing to come clean with."

Not every relationship hides a secret like this one, but plenty of people face similar decisions about how much they should tell a new companion. Some confidential information can't stay that way forever -- if you take daily medication or if you have a condition with visible symptoms, for example.

Other events in your medical history, such as addictions, mental illness, past surgeries, and health scares, can easily remain a secret -- but should they?

If you're considering telling your partner about a health secret, here are eight tips to help you spill the beans.

1. Practice what to say

Before you drop a bomb on a potential mate, rehearse your speech with a trusted friend or visit a therapist to talk it through, suggests Dr. Ken Robbins, M.D., a clinical professor of psychiatry at the University of Wisconsin-Madison.

"It's good to have somebody as a sounding board in a situation like this," he says. "How you handle this is not something your partner is likely to forget."

Laurie Davis, an online dating expert based in New York and Boston, suggests asking a friend what sounds most intimidating about your condition and getting his or her advice on how to smooth it over.

Getting a second opinion can help you decide how much to say (and when and where to say it), and running through your script a few times can make you more comfortable sharing your story.

Health.com: 10 tips for dating with depression

"You don't want to overwhelm your partner but you want to be sure to give him or her all of the important facts," Davis says. "You should definitely practice before you tell your match, or you'll most likely fumble through the conversation uncomfortably."

Mark Snyder, a 33-year-old writer from New York City, used to dread telling a new boyfriend that he was a recovering alcoholic. "I don't think I was ever able to shake off the feeling I was springing the information on him, usually when we were either out to dinner and he wanted to order a bottle of wine, or at a party where alcohol was introduced," he says. "I often blurted out, 'Oh, I don't drink. Sorry.'"

That changed, however, as he got used to talking about his condition. "As time went on, and I got more comfortable with this side of my life, so did the ease with which I told a man not to expect a tequila-scented smooch at the end of the night," he says. "I realize my blurting-it-out style was my own insecurities about sobriety. I celebrate it now."

2. Never tell on a first date

"Never tell someone on a first date," Davis says. "The results will never be favorable."

Robbins seconds that, especially if you're worried that your health secret "is likely to define you before the person has gotten a chance to know you at all."

That doesn't mean you should lie -- just let your partner get to know you first. "[Revealing too much too soon] may color how your partner sees you," Robbins says. "It defines you before you're ready to be defined."

Jenny, a 25-year-old graduate student from New York, had a breast augmentation when she was 19. "I don't really bring it up, not when I'm first dating people," she says. "But I've had people ask and I'm always honest with them. I wouldn't see a reason to keep it a secret, especially if we're getting serious."

If you're worried that your health secret might be a deal-breaker, you'll want to 'fess up by the fourth date, says Rachel A. Sussman, LCSW, a New York City therapist and relationship expert. That way, if your secret does make a big difference, you won't have wasted too much of their time -- or yours.

"Of course it can be painful, but if that's the case, it's better to know before you get too involved," Sussman says. "It's complicated if you withhold it and they find out too late. Dishonesty can ruin a potentially good relationship."

3. Be casual yet confident

So exactly how does one reveal a secret without just blurting it out?

"It's hard not to kill the mood with your health secret, because it's probably not something that can be easily segued from a topic you would normally discuss," Davis says. She recommends a conversation bridge, such as, "I feel like we're heading in a great direction, so I wanted to tell you something."

Just don't overdo it: "You don't want to frame this in a way that ends up making a bigger deal of something you don't want made into a big deal," Robbins says. In other words, make your delivery as drama free as possible.

Health.com: 10 reasons you're not having sex

Allison, a 30-year-old marketer from Baltimore, tries to casually tell dates about her multiple sclerosis (MS). "Usually I'll work it into another aspect of our conversation," she says. "It's a lot easier to tell someone I have MS as a side note in a conversation than to sit down and have a formal discussion focused solely on MS."

However, even a casual, well-prepared speech doesn't always meet with success. "One guy just clammed up and didn't want to say anything or go anywhere because, in his eyes, I might get hurt," Allison says. "And another guy became very controlling and tried to tell me what I should and shouldn't be doing for my health. Um, you're not my doctor, dude."

Robbins suggests that she have a confident, straightforward response about how she would like her dates to react; something like: "I don't see this as something that defines me -- but if I need help, please leave it to me to ask."

4. Don't have this conversation in bed -- or anyplace you associate with intimacy

Although this is a good guideline to follow when dealing with all types of relationship secrets, there's only one instance in which it is a hard-and-fast rule, Sussman says: "Don't wait until you're naked in bed with someone to tell them you have an STD."

That's true for any condition, Davis adds. But Robbins notes that if your health secret is a sexually transmitted disease (STD), you're going to have to open up to someone sooner rather than later.

"If it's something that's going to have a direct effect on your partner, it's something you're going to want to talk about sooner, as opposed to an illness that isn't contagious," Robbins says.

Amy, a 29-year-old graphic artist from Chicago, jokes that hepatitis C is the only thing she has in common with Pamela Anderson. But she's serious when it comes to telling boyfriends about her illness, which she got through a blood transfusion at birth.

"There is less than a 3 percent chance of transmission within a monogamous relationship, but I've always been truthful and upfront about it, whether I ended up in a sexual relationship with someone or not," she says. "They have a right to know."

If you tend to meet potential partners through online networks such as Facebook or Match.com, you shouldn't hint in your profile that you're concealing a health secret. However, if you're nervous about rejection or misunderstandings, you might be more comfortable dating someone with similar health issues.

There are many niche sites that cater to people with specific conditions, and they're a great way to be up-front with potential mates who are in the same boat, Davis says.

Daters with STDs can check out STDFriends.com or PositiveSingles.com, while Whispers4u.com is a great site for people with disabilities, according to Davis. NoLongerLonely.com helps those with mental illness seek partners. "[However,] you should discuss the volatility of your specific condition with your doctor before signing up," Davis says.

6. Know when to give your partner space

Even if you do your best to deliver a snag-free speech, it's possible that there could be an awkward moment. "[If that happens], say, 'I can tell by your expression that this is a lot to digest and I completely understand, and I'll give you the time and space to do that,'" Sussman says.

Then, offer some physical distance but stay in contact, Davis says. "Give them the following day to breathe and think," she suggests. "Call them on the third day if they haven't reached out to you. Let them know that they are still on your mind and you can't wait to see them again."

"A good person will listen and be kind and not judge, but if [your health secret is] something they can't live with, that doesn't make them a bad person," says Sussman. "It just makes them a bad match."

And there can be multiple reasons for a rejection -- many of which have nothing to do with you at all. "If your mother was an alcoholic and you date someone who's an alcoholic, you might have to make a choice that it's not healthy to be involved with someone in recovery," Sussman says.

Besides, your perfect match will accept you no matter what, Davis says: "If things were going well up until the time you told them, keep in mind that they rejected your health condition, not you. At the end of the day, it means that they were not the one."

Tiffany Sanchez Conover, 28, a store manager from northern Indiana, settled into a deep depression after her grandmother died. She slept all day, stopped eating, and became socially withdrawn -- even with her husband. Still, she kept her depression hidden, because she wanted to "figure it out on my own."

"[Eventually] I felt like I had to tell him because I could feel the strain it was placing on our relationship," she says. "A person can only take so much of their spouse not wanting anything to do with them before they start assuming the worst, an affair."

Tiffany's husband was hurt that she hadn't told him earlier, but he was glad she finally confessed. "After I told him, he was as supportive as could be," she says. "He would stay up late to talk with me just so I wouldn't feel lonely late at night, even though I'm sure he really wanted to go to bed."

It's especially important for married couples to be open to avoid hiccups in the relationship, Sussman says.

"In healthy marriages, people lean on each other and are honest with each other," she explains. "You can never lose by being honest."