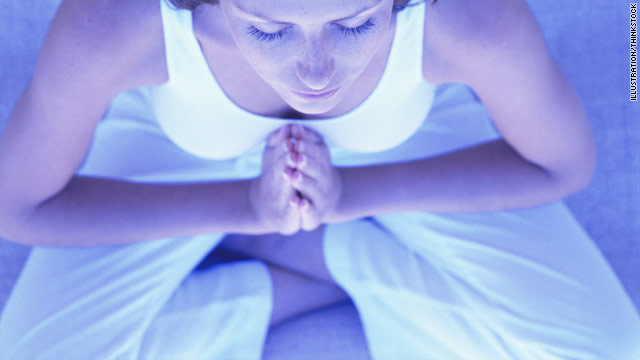 Formal meditation practice and the concept of mindfulness are finding their way into American psychotherapy practice.
STORY HIGHLIGHTS
RELATED TOPICS

(CNN) -- In the German night sky, there were hundreds of parachutes falling in a routine army training exercise.

It was this jump that would cause former United States Army Ranger Monty Reed more than two decades of pain. Reed fell from about 100 feet after another parachute interfered with his descent. He broke his ankle and back and to this day has trouble walking and feels discomfort when he breathes.

"I felt like the physical pain that I deal with every day was an enemy I had to fight," says Reed, 45, of Seattle, Washington.

But eventually, says Reed, a therapy technique that incorporates mindfulness helped him deal with this pain and the flashbacks he got from various army training situations. Mindfulness as a concept comes from Buddhism and is key to meditation in that tradition. It means being present and in the moment, and observing in a nonjudgmental way, says Susan Albers, psychologist at the Cleveland Clinic. Mindfulness encourages you to accept who you are, and trust yourself. Don't judge yourself for having the feelings you have -- just allow yourself to feel them.

Mindfulness is becoming more integrated into psychological therapy in the United States. Therapists have found uses for it for everything from post-traumatic stress disorder to eating disorders to anxiety. And its effectiveness for stress reduction and other benefits have been supported in scientific studies.

"You are able to really consider all your possibilities and make choices that are thought out, as opposed to just responding to situations based on a reactive kind of response," says Karen Sherman, psychologist and author of "Mindfulness and The Art of Choice: Transform Your Life."

Zen at your desk

In psychology, mindfulness is a tool in the bigger therapy picture, which may also include medication or other interventions. Formal meditation practice can be part of this, but it's not required for patients to start incorporating the principles of awareness and openness into daily life.

When Reed first went to his first mindfulness class at the VA hospital in Seattle, he was skeptical. In his words, it seemed like a "hokey, tie-dye, love-in kind of thing."

It was the third session, about year and a half ago, that started to change his thinking. During meditation, while his back throbbed, the therapist instructed him to visualize himself greeting a neighbor he'd known for years but didn't really like, and to say to that person, "Hello, old friend."

The neighbor represented the back pain Reed was feeling. He thought it corny at first, but this phrase "Hello, old friend" made him think about his pain in a new way.

"It was like the Hatfields and McCoys. We'd been shooting at each other for 20 years and all of a sudden, I put my rifle down and said, 'Come on in for a cup of coffee, McCoy.' "

He later realized that in addition to his physical pain, his attitudes toward his own irrational anger were making him more angry, and that anger further aggravated the pain. The mindfulness practice helped him reconsider those feelings.

Reed still has flashbacks and sometimes gets angry, but he says he's better able to manage them now.

"Mindfulness is a belief system that I use to change my attitude toward bad things that happen to me, and that gives me control of the results or the outcome."

Mindfulness is also being used to help patients with eating disorders.

At the Cleveland Clinic, Albers encourages clients to eat with a conscious, nonjudgmental awareness. Trying to lose weight, binge eating, anorexia, and bulimia are all problems that can benefit from being more mindful, she says.

It comes down to this: Eat food with purpose on purpose.

One exercise Albers leads is called the "chocolate meditation." It starts with looking at the chocolate, then unwrapping it, listening to crinkling to the foil, and finally tasting. Too often, people are thinking about the next bite; with this practice, you focus on the present. The idea is to become aware of any judgment you have about this eating process -- feeling guilty, for example -- and allow it to come and go.

Through mindfulness, bulimia patients learn they can sit with their emotional pain and tolerate it, rather than try to numb it through binging, she says.

And for people having trouble losing weight, she says, the same principle applies: Become aware of your habits and concentrate on how the food tastes.

After JoSelle Vanderhooft's father took his own life, the writer/editor from Salt Lake City, Utah, began to suspect that she might also have depression.

Vanderhooft, now 30, found herself facing a constant barrage of negative thoughts, and would feel even worse about herself for thinking that way. "It's just part and parcel of this illness" to judge yourself for feeling bad, she says.

She has been in therapy for six years, which has been a combination of medication and talking sessions. Meditating didn't work for her, but the philosophy behind mindfulness has helped her manage her negative thought patterns.

Phoebe Speck, a psychotherapist in Falmouth, Massachusetts, uses breathing exercises to help patients with anxiety. The patient focuses on the breath, concentrating on each inhale and exhale. This gives him or her a sense of getting back in control.

She also encourages people to visualize a calming time or place. Speck's own visualization of choice is thinking about sitting with her grandmother brushing her hair, an image that always calms her down.

A specific approach called mindfulness-based stress reduction started with the Stress Reduction Program at the University of Massachusetts in 1979, and has gained a lot of traction in the last three decades.

More therapists are incorporating mindfulness techniques into their practices, and research supports the benefits of their use, but there are a lot of other methods out there if these don't work for you, Vanderhooft says.

"If therapy doesn't work for you the first time, don't give it up. There really are many paths to managing mental illness."