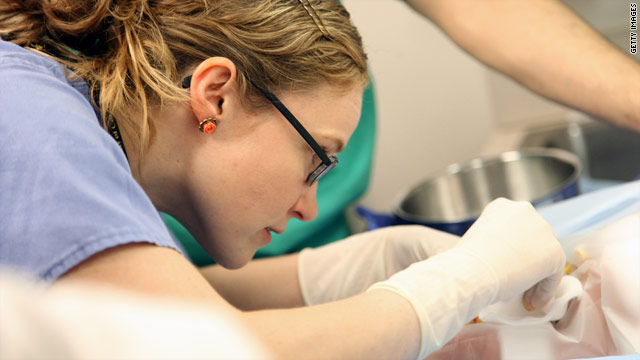 (CNN) -- In the California city that banned Happy Meal toys,outlawed sitting on sidewalks during daylight hours and fined residents for not sorting garbage into recycling, compost and trash, Lloyd Schofield wants to add a new law to the books in San Francisco: A ban on all male circumcisions.

Those who violate the ban could be jailed (not more than one year) or fined (not more than $1,000), under his proposal. Circumcisions even for religious reasons would not be allowed. At this point, Schofield's proposal is an idea that would have to clear several hurdles to be considered.

Schofield and like-minded advocates who call themselves "intactivists" seek to make it "unlawful to circumcise, excise, cut, or mutilate the whole or any part of the foreskin, testicles, or penis" of anyone 17 or younger in San Francisco.

The circumcision debate has passionate advocates on each side.

Your thoughts on circumcision

In some families, it's a cultural or religious tradition, or parents want sons to look like their fathers. Other parents decry it as mutilation. Medical evidence has shown mixed risks and benefits. Apart from the San Francisco proposal, circumcisions are under scientific scrutiny.

While widespread in the United States, circumcision rates could be falling, according to recent surveys. About 65 percent of American male infants born in hospitals were circumcised in 1999, according to latest data available from the Centers for Disease Control and Prevention.

While nationally the circumcision rate has remained steady, the most dramatic decline occurred in the West, where it fell from 64 percent in 1974 to 37 percent in 1999. Earlier this year, there were unconfirmed estimates that the circumcision rate had fallen to fewer than half for boys born in U.S. hospitals, The New York Times reported last summer, citing a federal report at the International AIDS Conference.

The American Academy of Pediatrics task force on circumcision has been reviewing recent research before it issues an official new position on the issue, probably next year, one panel member said.

The controversy over circumcision

"In the past, we've said newborn circumcision has benefits and risks," said Dr. Douglas Diekema, a professor of pediatrics at the University of Washington. "Given the fact that neither the risks nor benefits are particularly compelling, this is a decision to be made by parents."

The American Academy of Pediatrics currently holds that there is evidence of circumcision's potential benefits, but not enough to recommend routine newborn circumcisions.

"There have always been people opposed to it," he said. "One of the differences between today and 50 years ago is two primary things: Advocacy groups are better organized. They are much more vocal and the internet has allowed that expression in that way."

In San Francisco, Schofield's proposal is not a lone effort. He is part of the Bay Area intactivist group, which calls the procedure "male genital mutilation" and likens it to cutting female genitals.

Schofield's proposal has a long way to go, requiring 7,168 signatures by April next year to appear on the November 2011 ballot. Throughout the country, there have been similar measures, including a failed effort in Massachusetts earlier this year.

"It's up to the choice of the individual -- not the parents, society or religion," Schofield said. "This is a choice for body integrity. Just as females are protected from having a drop of blood drawn from their genitals, baby boys deserve the same protection."

-- Circumcisions are not medically necessary and violate the child's body.

-- It requires a medical procedure, which carries risk of complications and pain.

-- Foreskins are part of the natural body to help protect the penis.

-- Circumcision can reduce the risk of penile cancer, a rare disease.

-- It is part of traditional, religious practices in Jewish and Muslim faiths.

-- Men who are circumcised are less likely to get sexually transmitted infections such as genital herpes and human papillomavirus, according to a study of adult African men published 2009 in the New England Journal of Medicine.

Public health efforts have sought to increase circumcision rates in Africa to reduce STIs such as HIV/AIDS. It's unclear how circumcision lowers infection rates, but researchers speculate that the foreskin could foster a more favorable environment for viruses.

It's also possible to develop swelling and tenderness if the foreskin is not properly cared for.

"There are numbers of patients who had no clue what had to be done, because they didn't handle their foreskin correctly and they ended up getting adhesion," said Dr. Michael Brady, a professor of pediatrics at the Nationwide Children's Hospital in Columbus, Ohio. "That can happen; it's not a myth."

But Brady added, "That by itself, is not reason to circumcise an infant."

Dr. Emily Blake, an obstetrician-gynecologist and mohel in New York, said a ban would limit the rights of doctors and patients, cause an undue burden on families with newborns and stand in the way of religious freedom.

"It is part of our commitment to God. We believe we do it in a very humane, loving, supportive way," said Blake, who performs religious and non-religious circumcisions for boys, as well as naming ceremonies for girls. "There are certainly many places in the world where a ban on circumcision is one of the prongs of an anti-Semitic movement -- anti-Jewish and also anti-Muslim."

A circumcision ceremony might involve just a few people, or a few hundred, along with food, readings and prayers. Babies are comforted with sugar, topical anesthetic and pain relievers, and many sleep through the circumcision, Blake said.

Removing the foreskin from a male is not an equivalent to removing the clitoris from a female, Blake said, in terms of pain or long-term effects.

"I think it's harder on the parents. We make this into a very scary, terrifying thing. Most babies do incredibly well,'" Blake said. "I've done a great job if the parents cry more than the baby does."

Most parents come to the doctor's office having already decided whether to circumcise, Diekema said. Only a small percentage of parents are undecided.

Amy Jo Jones of Milwaukee, Wisconsin, made the decision to have her two sons circumcised and it "wasn't about vanity."

After reading into the topic, Jones, writer and blogger who contributes to The Stir said: "The deciding factor for us was I wanted my son to be like his father. I didn't want him grow up and feel his body was different. It's not about how it looks or doesn't look. I knew there were some medical advantages, although it's not considered medically necessary. The deciding factor was for him feeling comfortable with body and like that of his dad."

Jesse Sterling of Albany, California, decided to not to have his 10-month-old son circumcised.

Despite his Jewish background, he said the surgery would have "put my baby through a painful situation because of some beliefs. At this point, people do it because it's a habit."

Sterling, who was not circumcised, said he was teased as a kid in school for how it looked.

"Ever since then, I was like, 'Whatever. I don't care.' Don't try to sway me, other than informing me more thoroughly," he said.