Why eating a lot feels so darn good 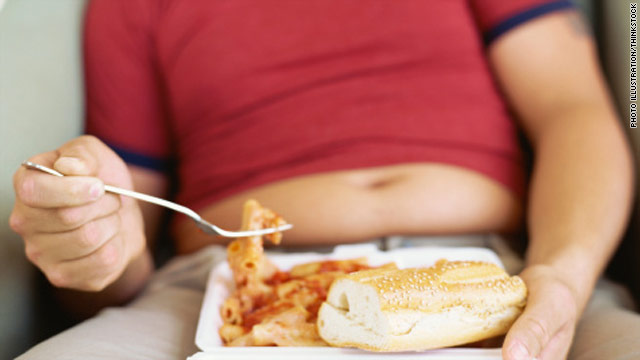 (CNN) -- On Thanksgiving, many of us will eat way more than normal and then waddle away contented, with a turkey and sweet potato buzz.

Having a belly stuffed with comforting food can feel like a warm hug from the inside.

Evolution has given us the instinct to eat a lot every time we can, preparing for hard times. It's the drive to survive, like puffy-cheeked squirrels storing up for the winter. It's also fueled by competition: beating the others to the food.

Our brains reward us for it, by releasing pleasure chemicals -- in the same way as drugs and alcohol, experts say.

"There are reward circuits to make you enjoy eating," said Roger Cone, professor and chairman of molecular physiology and biophysics at Vanderbilt University. "If we didn't eat, we wouldn't survive."

The rewarding feeling ensured survival of the species.

"For most animals and most of human history, we have not had excess of calories," Cone said. "Animals and humans had to work harder to survive. But now, with unlimited calories everywhere for most people and a great reduction in the amount of physical activity, we've become obese."

Despite the modern environment bombarded by appetizing ads and fast food, the wiring in the human brain hasn't changed. The reward circuits in the brain release chemicals that comfort and satisfy.

Having such easy access to fat, salt and sugar is a recent development in the human timeline, said Gary Wenk, author of "Your Brain on Food." "Our bodies reward us big time for ingesting these kinds of things. When we find them, we consume them as much as possible because we think we don't know when we'll see it again. Cognitively, we know it's not true."

The body rewards fatty, salty, sugary foods by releasing endogenous opioids, which help control pain. A study published in Nature Neuroscience this year suggested that high-fat, high-calorie foods affect the brain in much the same way as cocaine and heroin. When rats consume these foods in great enough quantities, it leads to compulsive eating habits that resemble drug addiction, the study found.

Although eating as much as possible helped mankind survive in lean times, it is not so advantageous now.

Being full feels satisfying compared with the gnawing, rumbling hunger pains. Food replaces that emptiness with a sleepy, relaxing comfort, which some of us know as a food coma. It settles over the body as hormones are released and blood is diverted to digestion, said Barbara Rolls, author of the "Volumetrics Eating Plan," a diet plan based on feeling full, known scientifically as satiety.

"We start off feeling not good and grumpy, then you eat and feel good," she said.

The body has natural cues to tell us to stop eating; it's a matter of whether we listen.

When food travels through the stomach, it has to be digested to move into the upper small intestine. Once it gets to this part, the intestines release a hormone to tell the brain to stop eating now, said Wenk, professor of psychology and neuroscience at Ohio State University.

As food intake increases, the stomach becomes full, the blood glucose levels change, and the hormone ghrelin, which stimulates appetite, calms down. That feeling of satiety should end the meal.

Despite these cues, diners often ignore them.

"Even when you're completely overfilled and you can't eat another bite, when something is tasty, you continue eating," Wenk said.

Rolls, a professor of national science at Pennsylvania State University, has this advice: "I advocate people need to not eat as their meal is the last one."

Here are some tips:

• Eat when you feel a little hungry, but don't wait until you feel ravenous, because you'll probably overeat.

• Stop eating when you're pleasantly full.

• Try this exercise: Assess on a scale between one and 10 how you hungry you feel (with one as very hungry and 10 as extremely full). During the meal, periodically pause to figure out where you are on this scale, and stop if you're at five.