Indiana infant to get transplant after all

From Mia A. Aquino, CNN 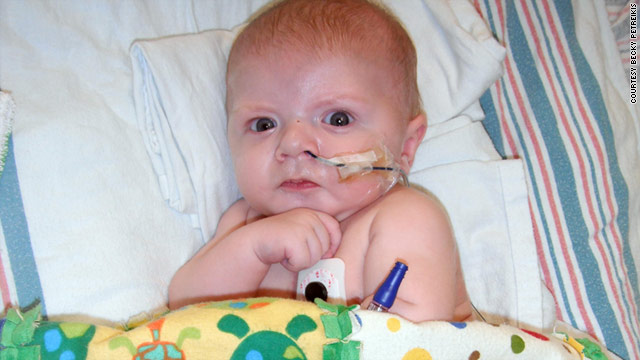 (CNN) -- An Indiana infant who was denied a life-saving transplant surgery by Medicaid will now have his operation paid for.

MDwise, Inc. and AmeriHealth Mercy of Indiana announced Friday that they will cover six-month-old Seth Petreikis' thymus tissue transplant after Medicaid denied his parents original claim. Two appeals to the state's Family and Social Service Administration had also been denied. This decision comes after media reports of Seth's plight.

After having an open heart surgery at about 2 ½ weeks, doctors diagnosed Seth with Complete DiGeorge Syndrome, a rare disease that leaves him with no immune system.

Dr. M. Louise Market pioneered the surgery at Duke Hospital in North Carolina -- the only doctor at the only hospital in the United States that performs the surgery. Duke Hospital has done 60 thymus transplants in patients with DiGeorge Syndrome, and approximately 75% of them survived. Without this transplant, Seth would face serious infections that would surely end his life.

Seth's health care is covered by Indiana Medicaid, but this treatment was originally denied because the surgery was considered experimental. Investigational treatments are not covered by Medicaid.

"Based on Seth's unique and compelling story, we believe making a compassionate allowance in this case is appropriate," said Caroline Carney Doebbeling, the MDwise chief medical officer, in a press release.

"It is a rare thing. We have not had a case this unique before. This is the first instance in the state of Indiana that someone has had this condition," Bruce said.

Seth's father said that MDWise called his wife Becky directly Friday afternoon and told her that their son's surgery would be covered. Petreikis said she was so happy she just started crying.

"I am so, so, so grateful," he said, adding that he is beyond excited.

"The thing that makes America great is we pull together when others are in need," the father said.

The family set up a website and bank account asking for donations to help them afford Seth's surgery. After only two days, $150,000 was raised. The Petreikises told CNN that because Seth's surgery is covered in full now, all of the money will be going to a foundation to get the procedure deemed non-experimental so that other families and children can be helped.

They added that they are overwhelmed with gratitude and thankful to the state of Indiana.

Seth's father said that Seth will have heart surgery in February to have a shunt replaced. After recovering, he will go to North Carolina where he will hopefully have his thymus transplant by April.