Love lands after 'Miracle on Hudson' 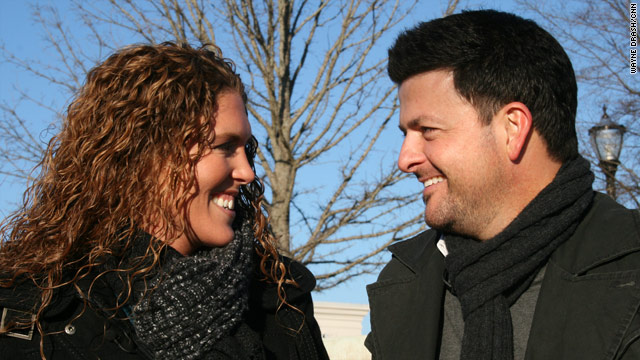 They were strangers on January 15, 2009, when they boarded the fateful flight that would become known as the "Miracle on the Hudson." A year later, they're in love.

"The first time people meet you, they want to hear the sensational part" of the crash, says Ben, 39.

He prefers to talk about something different: "I met this wonderful girl because of what we went through that day."

Laura, 31, looks at him, batting her model-like lashes, and smiles. "We don't dwell on what happened to us in the crash," she says. "It's more so on the experiences and lessons that we've taken from it."

'Is this really happening?'

A buyer for Belk department stores, Laura was in New York for the fashion market. With the nation in the thick of recession, she scooped up bargains for herself. She carried her trendy purchases through the airport that day on her return home to Charlotte, North Carolina.

Wearing a sweater dress, tights and boots, the woman with stylish sandy brown curls was getting a bite to eat when a group of guys asked if she was a model.

What's better than smiling and laughing and love?
--Ben Bostic

She was traveling with five Belk co-workers. Waiting to board, she fired off e-mails and thought little of the flight home or those around her.

Ben -- who was in New York for a quick business trip for Lending Tree -- caught a glimpse of the 5-foot, 10-inch knockout near the gate.

Later, when they boarded, he noticed her again, coming down the aisle. "The first thought I had was it'll be cool if she sits beside me."

He was in 20A, a window seat on the left side of the plane. She sat down three rows in front of him, in 17D, on the aisle.

It was one of those fleeting moments every single person knows: You see an intriguing stranger, hope for the best, then move on.

Ben picked up a book and began reading. Laura, who didn't notice Ben, thumbed through a Glamour magazine.

At the helm of the Airbus A320 was Chesley "Sully" Sullenberger, a 57-year-old former Air Force fighter jet pilot. He'd been flying for four decades, for US Airways since 1980. His expertise was about to mean everything.

About 90 seconds into the flight, the plane -- traveling at 250 mph and carrying 150 passengers and five crew -- struck a flock of geese.

Video: Sully had 208 seconds to land

Some passengers described hearing a series of loud thumps.

He looked out the window. "The whole back of the engine was pretty much engulfed in flames, just shooting out of the back," he says.

He thought: "This isn't good."

The plane banked to the left. The smell of burning geese, feathers and flames wafted through the cabin. With neither engine working, a silence fell over the jet as it glided through the skies. People began whispering. Some thought they were going back to LaGuardia.

Sullenberger came over the speaker system. "Brace for impact," he said.

"The most harrowing thing I'd ever heard in my life," Ben recalls. "I thought for a second: Is this really it? Am I going to die?"

Three rows in front of him, Laura thought about calling her family. She decided against it. If I die, what a depressing message that would be to leave on a message machine, she thought.

And what would she say if they did answer?

"Guess what? In 60 seconds, you're not going to be talking to me any more."

She crouched down, prepared for impact. "Is this really happening?"

Fear of birds and drowning

Laura grew up on a farm in Minnesota and had lived in Fargo, North Dakota, for the past 12 years. She'd jumped at the chance to take on a bigger role with Belk in Charlotte. But her focus on career meant there wasn't much time for relationships while jet-setting around for work.

All the priorities were reset after January 15.
--Laura Zych
RELATED TOPICS

Ben was a Carolina native, and he also poured his energy into work. The software developer at Lending Tree was divorced with no children. Nearing 40, he found his career rewarding, yet felt something was missing.

Both had fears that stemmed from their youths. Her bird phobia was rooted in days on the farm, where her grandmother kept chickens. Once, a bird pooped on Laura's shoulder, sending her into tears.

As she got older, her disdain for birds grew. When she traveled to New York on business, the abundance of pigeons sometimes terrified her.

Ben's fear -- of drowning -- went back to an experience he had when he was 8. On a beach outing with his family, his raft drifted out from shore and then flipped over.

He scrambled to try to get back on, but kept falling back into the sea.

He never relished the water again.

As the plane glided silently through the air, Ben peeked out the window every once in a while. He could see they were headed straight toward water.

"Just make it quick so I don't have to suffer," he thought.

The Airbus splashed into the frigid waters of the Hudson River.

The clank of seatbelts unbuckling rattled inside the plane. Water lapped at Laura's leather boots. She grabbed her wallet and her cell phone with a GPS tracking device. It'll be easier for rescuers to find my body and identify me, she thought.

She exited to the left and onto a wing. While bobbing up and down there, she called her father. "Dad, this is Laura. I've been in a plane crash."

When things calmed down and she knew she would be rescued, she found comic relief in what brought the plane down.

"You do realize my fear of birds is justified," she told her parents.

"OK, we'll give you that one," they responded.

Inside the plane, a bottleneck of passengers blocked some exits. A flight attendant in first class waved passengers to the front. Ben climbed over the seats.

At the door, he looked out and saw water all around. Clutching tight to his seat cushion, he jumped into a raft. With survivors packed in like sardines, he worried the raft might tip.

Later, safe on shore, Ben's colleagues who were also on the flight saluted life and told him: You know what we'd be doing tonight if we were single!

Ben thought about the woman with the long legs and curly hair. He wondered what happened to her.

A bottle of Maker's Mark bourbon helped ease Ben's charter flight home to Charlotte that night. In the media blitz that followed, Laura noticed Ben for the first time on television. They became Facebook friends.

Flight 1549 survivors -- whose stories were compiled in the book "Miracle on the Hudson," published late last year -- formed support groups. They considered "Sully" their hero, each other family.

Six months after the crash, when about 20 survivors and their families gathered at a home near Charlotte, Ben and Laura met in person for the first time.

"I was checking you out on the plane," he told her.

They went clubbing with a third survivor that night. Then the two stayed up talking until 6 in the morning. They shared secrets, their views on life's opportunities. "We connected," Laura says.

They took it slow at first. Neither was looking for a relationship. "We were family," Ben says, "and we didn't want to ruin that aspect of it."

Despite their bond, the last year has had its difficulties. They wonder why they survived when, a month later, all 50 people aboard a Buffalo commuter jet died.

Both have sought counseling. They take anti-anxiety medication to ease air travel. Ben never sits at a window seat.

Weeks after the flight, the airline returned salvaged personal belongings to survivors. Laura received a white envelope, labeled with a number. Inside was her waterlogged Glamour magazine.

"It put me back in that seat," she says, tears in her eyes.

Four other boxes of returned items sit unopened in a spare bedroom. She doesn't know whether to throw them out or save them.

"Things in there must not be that important," she says. "All the priorities were reset after January 15."

Her relationship with Ben, she says, is another "positive outcome" from that day.

"We kind of pick each other up if we start to slip," Ben says. "What's better than smiling and laughing and love?"

They're speaking about their relationship, Laura says, because too much news dwells on the negative. Their message is the opposite.

"Think about how you want to write today's page," Ben says. "Live, laugh, love and dance like tomorrow's not guaranteed."