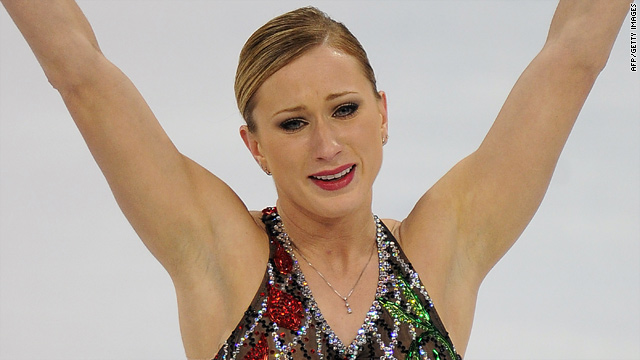 (CNN) -- Things were good for Canadian figure skater Joannie Rochette in the weeks before the Winter Olympics. She had a 2009 world silver medal. Training was going well. And, she told her agent, she had her confidante and source of strength by her side.

"'I have my mom,'" agent Dave Baden recalled Rochette saying to him at the time. "'At this point, I know what to do, and I have my mother.'"

"She's been training for this all her life, so the only thing she needed to get to that next level was the strength she got from her mother," Baden said.

That strength, he said, is helping her pull through the Olympics in Vancouver, British Columbia, even though her mother is now gone.

Therese Rochette died Sunday of a heart attack in Vancouver at age 55, Canadian Olympic officials said. Joannie Rochette opted to stay in the games, and two days later stirred a crowd with a courageous performance that earned the third best score in the women's short program.

On Thursday, the 24-year-old will finish her drive for her first Olympic medal during the free skate program at Pacific Coliseum.

"You could say it was like a sister-sister relationship rather than just mother-daughter. They talked all the time," Slipchuk said in a telephone interview Wednesday.

Supporting her love of skating, Rochette's parents sent their only child to a sports training center about an hour from home when she was 13, with her father, Normand, working overtime to get the money needed, according to Baden and the biography on her Web site.

In the early years at the training center, she lived with a sponsor family for most of the week. Later, she would get her own apartment near the center, visiting her parents on weekends, IMG agent Baden said by phone Wednesday.

Joannie Rochette rose through the ranks, winning novice and junior national titles before winning six straight senior Canadian championships from 2005 to 2010. In 2006, she placed fifth at the Winter Olympics in Turin, Italy, and last year she finished second at the World Figure Skating Championships in Los Angeles, California.

"We're in a sport when skaters can come in at 15 or 16, win a medal and leave. Joannie has continued to develop and get stronger, and now, in her 20s, she's hitting her peak," said Slipchuk, himself a 1992 Olympic figure skater for Canada. "She's put herself in the upper echelon."

Rochette aspires to more than just skating excellence. A science student at Quebec's College Andre-Grasset, she "loves and wants to give back to [skating] but wants eventually to go on and do something in a different field," perhaps something medical, Baden said.

Last summer, she went to Peru with World Vision, in part to record material promoting the relief agency's programs. While there, she visited women and children living in poverty, Baden said.

Her mother is inside her heart and soul, so she'll be there for her
--Rochette's agent Dave Baden

"She spent days with kids, going to their schools, learning about nutritional needs, learning what is needed to get better education and living conditions and improve health," Baden said. "She's a shy person, but she was able to relate to the kids and hug them and show affection. She's strong and caring."

Now she's back on ice, aiming for a medal -- this time without her mom. Her father, who'd traveled with Therese to Vancouver to watch their daughter, told Joannie of her mother's death Sunday morning. Supported by a close circle of people -- including her father, her boyfriend and her longtime coach -- she practiced that day.

"She handled [Tuesday] well," Slipchuk said. "The crowd was so supportive, and at the end of the program you saw the release of what was inside of her."

Rochette's comment to Baden about her mother a couple months ago struck him at the time as poignant. He said he remembered it upon hearing of Therese Rochette's death.

"Her mother is inside her heart and soul, so she'll be there for her," he said, "and [Joannie] will draw from that strength."