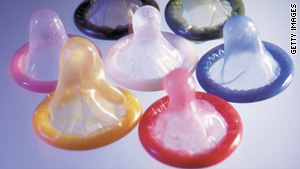 With an emergency shipment included, more than 100,000 condoms were distributed at the 2010 Vancouver Olympics.
STORY HIGHLIGHTS
RELATED TOPICS

(CNN) -- The medals have been presented, the caldron extinguished and the crowds dispersed, but there's one record from the 2010 Vancouver Olympics that may have been overlooked: Most condoms distributed at a Winter Games.

It's hard to say this conclusively, and judges from other host cities may demand a recount, but Clay Adams of Vancouver Coastal Health said the word on the public health street is that Vancouver is king of the prophylactic winter rings.

Over the course of 17 days, the health agency doled out 100,000 condoms, supplied by the British Columbia Centre for Disease Control. And after buzz, some based on rumors, grew that there was a shortage -- "We were not getting calls from people saying, 'Help, I need condoms,'" Adams laughed -- an emergency shipment of 8,500 additional rubbers came in from the Canadian Foundation for AIDS Research.

Some media outlets reported that the supply was strictly for Olympic and Paralympic athletes and officials, totaling about 6,500 people according to the Vancouver Organizing Committee. That would suggest an average of at least 15 condoms per person, and rampant sex of Olympic proportions.

But Adams, spokesman for Vancouver Coastal Health, clarified and said the free condoms were available not just to athletes and game officials. They were on the cruise ships that housed security, support staff and volunteers. They were in washrooms at public venues, including the downtown pavilions where visitors gathered for free concerts. They were handed out by volunteers and readily available in clinics.

The mass distribution of rubbers was part of a greater effort to improve HIV and AIDS awareness, Adams said.

Lots of people don't have the same kind of access to public health messages about disease prevention, and "when you've got a global audience like this, it's a huge opportunity to educate the world," he said.

Since the 1992 Summer Olympics in Barcelona, Spain, condoms have been distributed free to athletes. About 40,000 of the original 100,000 in Vancouver were for those staying in the athlete villages in Vancouver and Whistler, Adams said.

How many of them were actually used is an impossible question to answer. Some say condoms were snagged as souvenirs, although Adams said they were not branded with Olympic rings. He said he did hear stories of athletes from countries with inferior condoms stuffing their suitcases with the coveted rubbers.

But no matter what happened to the condoms, the public health effort in Vancouver is one that makes him proud.

"Indications are that Vancouver topped the podium for Winter Olympics," Adams said. "Although we recently heard that they issued 35 million condoms for Mardi Gras in Rio, so I suppose we all have a long, long way to go to reach that mark."