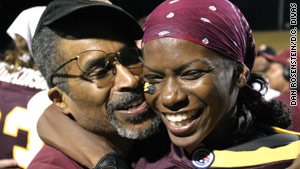 Natalie Randolph shares an embrace with her father, the late Nate Randolph, after a D.C. Divas game in 2006.

"We needed to find the best leader, role model, coordinator and instructor for our young men," Coolidge principal Thelma Jarrett said. "Natalie passed our first test -- she's proven herself as a great organizer, a leader who is knowledgeable about the sport as a player and a coach."

Students and faculty, along with Randolph's loved ones and former D.C. Diva teammates were on hand for the announcement as Mayor Adrian Fenty decreed March 12, 2010, "Natalie Randolph Day" in Washington.

Randolph was a wide receiver for the D.C. Divas women's pro football team and a standout sprinter and hurdler at the University of Virginia. She has experience coaching boys, having been an assistant football coach for Washington's H.D. Woodson High School in 2006 and 2007.

Randolph said gender would not make a difference in her new role.

"While I am proud to be part of what this all means, being female has nothing to do with it. I love football, I love football. I love teaching. I love these kids," she said Friday.

"My role as head coach is to do all that I can to help these young men, these students, reach their goals. I want to make their families, the school, the city proud of us as a team, not me."

Randolph said she had already sought out some members of her coaching staff.

In a Thursday story about Randolph's hiring, The Washington Post reported that another Washington teacher, Wanda Oates, was named head football coach at a different Washington high school in 1985. But she was removed a day later after coaches who didn't want to coach against her pressured the school district, the Post reported.

But Wade-Hutton, whose family has been keeping track of interscholastic sports through the company for 50 years, said that although she's heard of women who were assistant football coaches at high schools, she's "never heard of a female head coach at a high school football team."

"Girls and women -- along with their fathers, sons and brothers -- now have clear evidence that the gridiron ceiling can be broken. Natalie's hiring will serve as a much-needed catalyst for women in leadership positions across all sports," Durkin said.

Rich Daniel, the Divas' general manager, said Randolph will win over anyone skeptical about her ability to coach in an almost exclusively male sport. He referenced her assistant position at Woodson, where she worked with wide receivers.

"I know their passing game was one of the best in the league," Daniel said. "She went through some of the same things she'll go through now: Do you know how to coach? Can you play? But you can ask that of males, too. That's not unique to her being a female.

"People will have that initial reaction, but they'll realize she ... really knows what she's talking about."

Randolph's attorney, Lawrence Wilson, said, "I think everybody is pretty excited about it, not just because she's making history, frankly, but I think they're just excited about having Natalie Randolph."

Wilson, who knew Randolph at Virginia, where he also was a track and field athlete, said she is a "soft-spoken teacher -- and I'm sure a coach -- with a swift sword."

"She has a quiet demeanor about her but has no problem getting respect from people," he said.