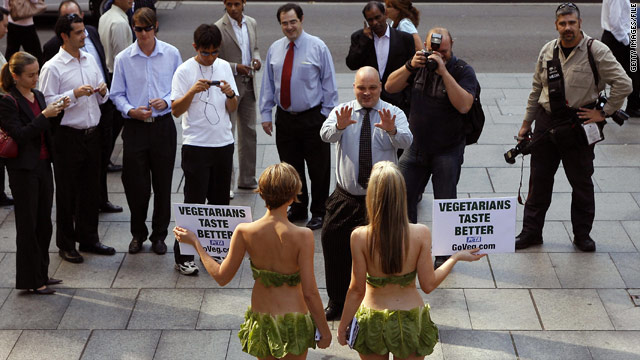 (CNN) -- Not content to sit quietly at home eating their tofu cutlets, more and more vegetarians, it seems, are taking action, trying to get the carnivorous masses to change their ways.

Of course, the meat-free have been trying to win people over to their cause since the time of Pythagoras. But lately, activists are trying more in-your-face tactics.

For Lierre Keith, author of "The Vegetarian Myth," the "in-your-face" part is quite literal. A former vegetarian who has publicly recanted, she was lecturing in San Francisco, California, last week, when three masked assailants shouted "Go vegan!" and lobbed chili pepper-laced pies at her.

Even in hard-core vegan circles -- which exclude using animal-based products for food, clothing, medicine or any other purpose -- such borderline-violent exploits are controversial.

More common is the approach of folks like newly converted talk show host Ellen Degeneres, who has been sharing recipes for vegan nachos along with her philosophy.

Still, recipes only go so far. And, more to the point, they don't get as much media attention. For many vegan and vegetarian activists, getting coverage is an art.

If you've ever read about a particularly outrageous pro-vegetarian campaign, there's a good chance that People for the Ethical Treatment of Animals was behind it. The folks at PETA seem to be firm believers in the idea that "all media attention is good media attention," and the more shocking or ridiculous the stunt, the more media outlets will pick up the story.

PETA was laughed at when it tried to rebrand fish as "sea kittens," in hopes that the more cuddly name would make seafood a less appealing mealtime choice. It was criticized for the suggestion that recently deceased Oscar G. Mayer should be buried with his company's hot dog-shaped Wienermobile.

After British celebrity chef Gordon Ramsay cooked up horse meat on his show, PETA UK dumped a ton of manure outside his London restaurant.

Plenty of ecological activists cringe at these kinds of prankish maneuvers, but they do get noticed. And that, apparently, is the point.

Why else would PETA organize an army of zombies to protest outside of KFC restaurants?

Not content to oppose meat-eating in the real world, PETA also took a swipe at virtual carnivorousness: In response to the Nintendo DS game "Cooking Mama," the group released its own bloody version.

And, as anyone who's seen its anti-fur posters knows, PETA is well aware that sex sells. The group got the granddaughter of Argentinean revolutionary Che Guevara to pose wearing nothing but a bandolier filled with carrots.

The group has enlisted Pamela Anderson and Elizabeth Berkley to pose for the Lettuce Ladies Web site (find it yourself) -- probably the best thing that's happened to their careers in years. Is there tofu wresting? Yes, there is tofu wrestling.

PETA is not alone in combining feminine pulchritude and an anti-meat agenda. A couple of years back, Portland, Oregon, resident Johnny Diablo got a bunch of media attention when he opened Casa Diablo, the world's first vegan strip club.

Serving veggie burgers with a side of nudity (or maybe the other way around) might seem to be just a publicity stunt. (The fact that Diablo tried to put the club up for sale shortly after opening would seem to suggest that.)

But Mr. Diablo is an earnest vegan himself, and he's apparently retained ownership of Casa Diablo, though reviews -- of both the cuisine and the more fleshy attractions -- are decidedly mixed.

As the most public face of our carnivorous culture, McDonald's is a popular target of vegetarian activism.

Back in 1985, the London branch of Greenpeace declared October 16 World Anti-McDonald's Day, and every year since, there have been protests and rallies all over the globe.

The group Vegan Action, founded by Berkeley students in 1993, has come up with a gentler -- and tastier -- way to combat the ubiquity of the golden arches. With its help, you can host your own "McVegan" event. There will be veggie burgers, there will be uniformed servers, and there will even be a costumed clown mascot -- Reggie McVeggie, "Ronald's kinder brother." The slogan: "Billions and billions saved."

Even a green group like Friends of the Earth isn't safe from vegan wrath. Last year, the group hosted a comedy night at the Hammersmith Apollo in London, only to have the event crashed by masked activists wearing enormous artificial testicles.

They called themselves the "Vegan Avengers," and their crude slogan suggested that the middle-of-the-road members of FoE should grow a similar pair by supporting veganism. The Avengers have not been heard from since their single appearance.