Laid off and living on airline points 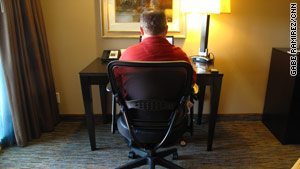 Having lost his job, Jim moves from hotel to hotel, using airline points to pay for rooms. He asked his last name not be used.
STORY HIGHLIGHTS

San Clemente, California (CNN) -- There are two kinds of business travelers. Those who have a goal in mind when collecting hotel and airline points, and those for whom collecting as many points as possible is the point.

Then there is Jim. Jim uses his points in a way he never would have imagined two years ago.

"When I accumulated them, I was hoping it was going to be for trips to Hilton Head to play golf or trips to wine country or Europe. But turns out I used them to put a roof over my head," says Jim, who doesn't want his last name revealed or his face shown on camera.

The middle-aged businessman had a good job in corporate development. He had a nice middle-class lifestyle in Orange County, California, a comfortable house, a wine collection and a BMW in the driveway.

He was a road warrior, hopping from one city to another. Airplanes, hotels, meetings, all part of his work. This was his way of life. Like most of his fellow business travelers, he took advantage of the perks -- racking up points and gaining elite status at hotel chains and airlines.

Video: Airline points keep him off the street
RELATED TOPICS

It all ended 2008 when he was laid off from his job. Used to being recruited for his skills, Jim was at a loss when he was unable to find new employment right away.

"I lived off of savings and unemployment for a while," he says, "but that all ran through, and I lost the house about two months ago."

He gathered what he could and moved his belongings into storage before they could be sold at auction.

Eventually, Jim started to use the points he'd accumulated as a corporate road warrior for basic shelter.

He began to ration them, allowing his hotel stays to stretch from days into weeks. He stopped flying to job interviews in the Bay Area and converted his airline miles into hotel nights. He now drives when interview opportunities present themselves.

The factors he takes into account when deciding where to stay are everything from high-def television channels to free breakfast.

Now, instead of jetting from one meeting to another, Jim sends out resumes, talks to recruiters, does laundry and hopes his unemployment check arrives in his post-office box on time. Those checks keep his storage unit paid for and his car on the road. His car is vital to him even by Southern California standards: He needs it to reach the next hotel and get to his next job interview.

He also documents his struggle to survive unemployment on Twitter using the screen name HomelessThomOC.

Jim says he keeps his anonymity because he wants to maintain some dignity and more importantly, he doesn't want to upset his elderly mother. He says he thinks that telling his story is important. It's a story he hopes soon will have a happy ending. His points will dry up in two months, and the lease to his car ends a short time afterward.

"Well, I am confident that I will find a job between now and then, and it won't be a problem, and I will just get on with my life," he says.

If not, he says his situation will go from bad to dire.