No hooking up, no sex for some coeds 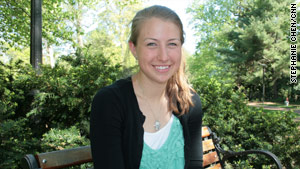 Nashville, Tennessee (CNN) -- Almost every weekend, there is a tradition called raging at Vanderbilt University.

It's a recurring, drunken activity that isn't the proudest moment for student Frannie Boyle. After consuming large quantities of alcohol before a party, her night would sometimes end in making out with a stranger or acquaintance.

Casual hook ups fueled by alcohol may be the norm across college campuses, but Boyle, now a 21-year-old junior at the school, chose to stop. Her reasons to quit hooking up echo the emotional devastation of many college students, particularly girls whose hearts are broken by the hook-up scene.

"I saw it [hooking up] as a way to be recognized and get satisfaction," said Boyle, shaking her blond ponytail. "I felt so empty then."

The hook-up culture on campuses may seem more pervasive than ever, especially as media outlets, books and documentaries rush to dissect the subject, but some college women and men are saying no.

Some, like Boyle, experimented with hooking up and quit. Though she is Catholic, she says her reason for disengaging herself from the hook-up culture had more to do with the unhappiness she experienced afterward. Others influenced by religion have abstained from casual physical activity from the moment they set foot on campus.

The idea of rejecting hook-ups may not be as strange as it sounds in a generation surrounded by sex. Pop star Lady Gaga recently announced she was celibate and encouraged others to follow. In Kelly Clarkson's song "I Don't Hook Up," she addresses the dominant hook-up culture: "I do not hook up, up I go slow, so if you want me I don't come cheap."

The term "hook up" is ambiguous, usually defined as a no-commitment, physical encounter with a stranger or acquaintance. Hooking up can range from just a make-out session all the way to sex. Other lingo for the no-commitment sexual encounters are "booty calls" or "friends with benefits."

Read the downsides of having friends with benefits

Various academic studies have cited at least 75 percent of women have engaged in hooking up on campus, and the number is usually higher for men. The activity is most likely precipitated by alcohol, studies show. Boyle's decision to quit hooking up leaves her in the minority.

Evidence of the backlash on hooking up on campuses can be seen in the growing popularity of the Love and Fidelity Network, a secular, nonprofit group dedicated to helping college students open the discussion for a lifestyle that doesn't involve casual sexual activity with anonymous or uncommitted partners.

The organization, which promotes sexual integrity and defends marriage though discussion and speakers, has gained a presence on at least 20 schools from Harvard University to the University of Notre Dame since its inception in 2007. There is no official count on the number of students who participate in the Love and Fidelity Network. But at Princeton University, about 40 students have joined.

The group says it does not judge those who hook up, but it does promote abstinence.

"A majority of college campuses, when it comes to discussing marriage and sexual relationships, tend to be very one-sided," said Cassandra Hough, founding director of the Love and Fidelity Network. "We feel that it does add to pressures for young men and women to participate in a certain type of culture."

At Vanderbilt University, a pristine campus defined by elegant, Southern-style architecture and manicured lawns, the hook-up culture can be hard to avoid, Boyle said. The Greek scene also can create more pressure to hook up, added Boyle, who is a member of a sorority.

Boyle explained the warm weather compels some students to engage in "day fratting," imbibing for hours in the front yard of a fraternity. Day fratting can result in "afternoon delight," noncommittal physical activity between two people that can include casual sex.

"Right now, people conceive the idea of what they think from the media and friends -- that the only options are to extremes: to deny everything fun, including sex, or just to hook up," says Emily O'Connell, a freshman at the College of William and Mary in Virginia.

After observing the hook-up scene as a freshman, O'Connell is starting a nonreligious group to talk about alternatives to hooking up.

"There's definitely a middle ground, and it's not that outrageous," she said.

In addition to protection from STDs, some students may have good reasons not to hook up. Over the past decade, scholars, researchers and authors have begun to examine the psychological toll of hooking up.

An April 2010 study from James Madison University in Virginia revealed more college women tend to want a relationship out of a hook up compared with men who prefer to stay independent. Other studies have shown the instability from hooking up can cause depression. Repeated rejection and detached relationships can also damage self-esteem.

But Laura Sessions Stepp, author of "Unhooked: How Young Women Pursue Sex, Delay Love, and Lose at Both," said not all hook-ups have a negative impact. Some students can engage in no-strings relationships without suffering emotional trauma. Some women say casual sexual activity allows them the benefits of experimentation.

It's unclear at what point hooking up eclipsed traditional dates. But what is clear is that some students, like Boyle, want old-fashioned courtship to return.

Kathleen Bogle, who wrote "Hooking Up: Sex, Dating, and Relationships on Campus" in 2008, says she's found there is a strong and growing desire to bring back traditional dating. Bogle points to the uptick in college students participating in online dating.

On Facebook.com, several groups are rooting for the traditional dates. The motto on the group Bring Dating Back reads, "This group is for all those girls who wish that once in a while a guy would take her out on a date before trying to get her into bed. At least invite us to dinner before expecting us to get down and dirty!"

Vanderbilt student Boyle says her decision she made at the end of her freshman year to quit hooking up came with criticism. She is still surrounded by friends and peers who do it.

She's already lost some guy friends who couldn't understand her decision. But Boyle counters, "They probably weren't my friends anyway."

Several students from her school participated in the Love and Fidelity Network's annual conference earlier this year. There is a possibility that Vanderbilt may start a similar nonreligious group that provides an alternative discussion to hooking up.

"I'm respecting myself," Boyle said confidently one sunny morning before class. "And I won't waste my time with some guy who doesn't care about me."