How 'green' is your love life?

By Fanny Facsar, Special to CNN 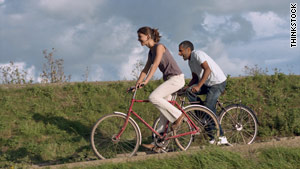 Washington (CNN) -- You may drive a hybrid car, eat organic food, use "green" beauty products and design your home according to the latest environmentally friendly standards.

But if you haven't considered "greening your love life, you are still a total environmental disaster," according to Stefanie Iris Weiss, author of the recently released book, "Eco-Sex."

How should it work? Should you envision melting glaciers during a romantic dinner with your significant other?

It could be as simple as where you choose to go on a date.

"How about going to a restaurant where you can eat a seductive menu based on organic, local food, which has produced less carbon dioxide before it ends up on your plate?" Weiss suggested.

She is hoping to steer people away from "dirty" sex toward eco-sex. That means:

• Hop on your bike for your next date and leave your car at home. (That means saying "adieu" to long-distance relationships.)

• Stop excessive spending on Valentine's Day. (It produces way too much trash anyway.)

• Don't be so keen on having babies. How about adopting a child instead or implementing a one-child policy?

Weiss' theory is not entirely new. Greenpeace published a guide to "environmentally friendly sex" in 2002, which includes "switching off the lights during romance" or "if you want to see your partner, have sex during the day."

But Weiss goes further: She covers everything from your first date to raising your kids "green."

She also suggests keeping the environment in mind when your sex drive is fading. Viagra, she says, is overrated.

"People should eat oysters as an aphrodisiac instead," Weiss says. "They are a full of zinc, a precursor of testosterone. Casanova himself was known to eat them in great quantities before sex."

On the streets of Washington, the idea of an eco-friendly love life is met with laughter.

"How green is my love life? Are you serious? Don't be absurd!" were the most common reactions from people on the street.

But the concept is in full display at a local sex shop.

"We sell organic oils, edible underwear and toys that are completely recyclable," says Luis Cadillos, a salesman at Georgetown's "Pleasure Place." "The problem is our customers are embarrassed to dispose their toys properly." He says he thinks promoting an eco-friendly sex life could be "big business."

"We should have an extra shelf for our green-conscious customers," Cadillos suggests.

His colleague, Paula Kov, is less enthusiastic about the idea.

"I try to live environmentally friendly, but it goes way over the top to think about [carbon dioxide reduction] in my love life," she says.

Video: Clothing made from recycled material

"I never thought about how green my love life is. But in fact this is about reducing our extensive consumption and that should concern every part of our life," he says.

Tidwell, who is the director of Chesapeake Climate Action Network in Washington, decided long ago to have only one child.

It's clear in Weiss' 200-page book that she is using sex to promote a completely green lifestyle.

But is that such a bad thing?

"With sex anything sells. Even the environment," Weiss says.

She says she is hoping that, in the midst of the global climate crisis debate, her book "may finally approach those green-grumps, who don't know the basics about living an environmentally friendly life."

"I actually hope the climate alarmists, consisting of mostly liberals, take her advice on how to have eco-friendly sex without getting pregnant," Teach posted on rightwingnews.com.

John Bargh, who teaches psychology at Yale University, sees a different problem with the eco-sex theory.

Thinking about the environmental impact of your love life, he says, goes against human nature.

"Human beings are irrational," he says. "We make decisions based on our desire, especially when it comes to love."