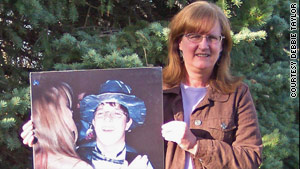 Debbie Taylor of Wyoming says she ignored signs her son was drinking. He died of alcohol poisoning at age 18.

(CNN) -- Martha was tough on her children when it came to alcohol in their early teens.

When she saw beer at a party her then-14-year-old daughter was attending, she broke it up and told all the kids to call their parents. When her son was about the same age, she grounded him for a month after learning he had a drinking episode.

But her outright prohibition softened when her children reached their late teens. She lives in Georgia, a state that allows parents to let their underage children -- but no one else's -- have alcohol in their own homes. She lets her now-18-year-old son have a beer or a little wine at home, in part to kill curiosity, but won't serve his friends.

Suspecting alcohol will be part of his senior prom experience, she's having him take a limo. While planning to escort him and his friends to a rented beach house for spring break this year, she expected to have a "don't ask, don't tell" policy, but she wouldn't furnish alcohol, and she'd take away their car keys.

It's probably unrealistic, she says, for parents to forbid alcohol to older teens outright. Instead, she teaches moderation, safety and responsibility.

"If you can be around your child and monitor them all the time and watch everything they do, and if it works for you and them, then [prohibit it]," said Martha, an Atlanta-area resident who spoke on condition that her last name be withheld. "But I think, given what's out there, you have to teach them how to be safe and considerate of others."

U.S. law requires states, as a condition of getting highway funds, to prohibit people under 21 from buying or publicly possessing alcohol. Some states have situational exceptions, but no state allows people to furnish alcohol to an underage person who isn't their child, ward or spouse, said Mike Hilton, deputy director of the division of epidemiology and prevention research at the National Institute on Alcohol Abuse and Alcoholism.

Yet minors find a way get alcohol elsewhere.

About 10.1 million people ages 12 to 20 in the United States -- more than a quarter of that age group -- drank at least once in a certain month's period in 2008, according to that year's National Survey on Drug Use and Health.

More than 30 percent of underage drinkers said they paid for their most recent drink; for those who didn't pay, the most common source was 21 or older and not a relative, according to the survey for the Substance Abuse and Mental Health Services Administration.

With matters of health, safety, morality and legality to consider, what goes through parents' minds when they determine what stance to take with their children on alcohol?

Debbie Taylor says she told her son, Casey, that she didn't want him to drink while underage, but if he ever did, he was not to drive.

She wishes her message had been different.

Casey Taylor, of Casper, Wyoming, was 18 when he died of alcohol poisoning in July 2002. Just two months out of high school and one month into living away from home with a roommate, he had succumbed to a challenge from friends to chug a large amount of rum, his mother said.

Debbie Taylor said she'd never caught her son -- an honor roll student and varsity football player and wrestler -- drinking, but she twice found rum bottles hidden in her garage when he was 17 and suspected they were his. The first one she threw away. The second, she left.

"My reasoning for leaving the second bottle there was that all of the kids are doing it, and I did it growing up," Taylor, 52, said.

Taylor joined Mothers Against Drunk Driving in 2003 and is now the Wyoming chapter's spokeswoman. She said she now believes teens aren't ready to drink.

MADD supports the minimum drinking age of 21 years, citing numerous studies showing that it has reduced alcohol-related fatalities and injuries since it was federally mandated in the 1980s, and arguing that drinking can be harmful to teens' still-developing brains.

Sheri Reed, an editor with The Stir, a blog run by CafeMom about issues for mothers, says her readers give her a full range of reactions and perspectives when it comes to teens and alcohol.

Reed says the topic is important for her, in part because she's a mother of boys ages 7 and 3, and because she's a recovering alcoholic who started drinking in the eighth grade and has been sober for nine years.

The California resident has written that she has no intention of introducing alcohol to her children when they're teens. She does intend to talk to her kids about her experiences and let them know that alcohol isn't necessary for a fulfilled life.

She doesn't know yet what her exact plan will be beyond lots of talks. But she says she doesn't expect that she and her husband will be able to stop their children from trying alcohol before they're 21.

As for Martha of Georgia, she says she generally discourages her 18-year-old from drinking and reminds him it's against the law outside her supervision at home. Putting him in school activities and encouraging him to study hard -- she says he's a straight-A student -- helps keep him out of trouble.

"He has a good grounding in what's healthy and what's not. That's what I taught my children -- how to live with balance," she said. "I've seen people go extreme in either direction [with alcohol], and I don't think either one is totally healthy."