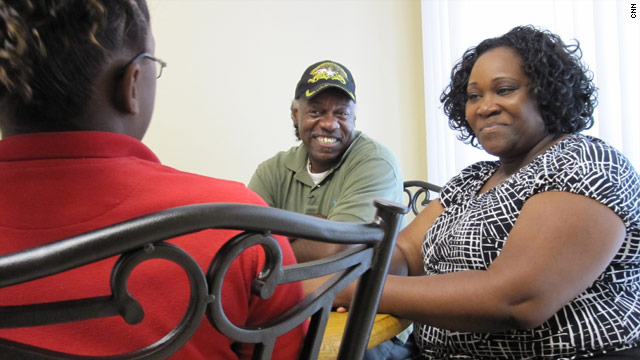 Palm Beach, Florida (CNN) -- For years, Army veteran Roy Foster's motto has been "No man left behind." This month, he's broadened it to include women.

In November, Foster was recognized at "CNN Heroes: An All-Star Tribute" as a Top 10 CNN Hero of 2009 for his efforts to help male veterans struggling with homelessness and addiction. His nonprofit, Faith*Hope*Love*Charity, has provided food, housing, counseling, employment and medical services to more than 1,100 veterans.

"I was somewhat overwhelmed at the tribute. To be a part of something that you love doing -- to be honored in doing it was, you know, strange," recalled Foster, 54. "But then to be showcased internationally was tremendous. And it's still reaping benefits today."

Among those benefits is Foster's recent opening of the First Stop Resource Center and Housing Program in Palm Beach, Florida. The center and program widen the scope of support services his organization has been offering through its original Stand Down House. They also bring Foster's long-held dream to fruition.

"Twenty years ago, the dream was to be able to provide assistance and services for homeless veterans and their entire family," he said. "We did come up with Stand Down House 10 years ago, but there was never that support for the family or the female veterans. This year, we've been fortunate enough to complete that vision."

The First Stop Resource Center assists veterans and their families through various periods of crises, including homelessness and addiction. Before its addition, Foster and his team had to send veterans in need from one partner aid agency to another over multiple days, in multiple locations -- increasing the risk of losing clients back to the streets.

At the new resource center, veterans in need are able to meet with any of First Stop's 15 community aid partners under one roof in a single visit. They can receive assistance with housing, legal, medical care, employment, child care, education, pensions, food stamps and transportation needs.

"We were looking to establish a place where we will not lose them in that process of 'hurry up and wait,' " Foster said. "We want to centralize it. We want to get their needs addressed and ... get these service members back out into the community. That's what it's about."

Barbara Williams is First Stop's first female resident. An Operation Desert Storm veteran, Williams fell on hard times after losing her job last year. Now, she and her daughters have a roof over their heads and the hope of better days to come.

"My pride is restored," said Williams, 40. "I'm able to just go off to look for jobs and not worry about where am I going to go when I come home. It's just so much relief."

The seed money for the new housing facility arrived shortly after Foster was announced as a Top 10 CNN Hero. A local veteran and recovering addict who was touched by Foster's story approached him with a donation that covered the first year's housing budget, about $44,000. The furnishings were donated by a local veterans' motorcycle club.

"Believe it, there are people in America that do care, and we were blessed to come across these individuals," Foster said. "And the thing that I appreciate the most is it is done for veterans by veterans. ... We are going to leave no man, or woman or family behind."

Want to get involved? Check out the Stand Down House website and see how to help.