Paralyzed drummer is back with style
STORY HIGHLIGHTS

Minneapolis, Minnesota (CNN) -- Jason Gerling always knew he would make a major impact as a musician.

An accomplished drummer, he was at the top of the local music scene in 1994, winning local drumming competitions and performing regularly at hot spots in the Twin Cities.

He was 23 years old, and planned to move to New York, or perhaps Nashville, to launch his music career.

Then one night, everything changed.

Heading home from a late night gig, Gerling fell asleep at the wheel.

"The car flipped over five or six times, that's what they told me," he said. "They said I looked like something out of a horror movie ... They had to use the jaws of life to snip through the car doors to get me out."

He was lucky to be alive. But then came the bad news. 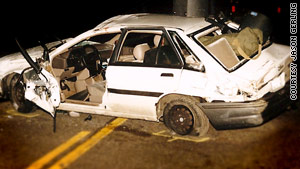 Gerling's car flipped over several times, trapping him inside.

"It was like a nuclear bomb was dropped on my life. I thought my career was over."

The accident had left him paralyzed from the chest down.

Gerling refused to give up his passion from drumming. Within a few years, he regained the use of his arms.

But he never got back the use of his legs. To this day, Gerling remains in a wheelchair.

That has hampered his ability to play a drum set which requires a foot pedal to operate the bass drum and the hi-hat cymbal.

For a while, he got by with a special setup that triggered a bass drum noise when he hit a certain pad with a drumstick.

That didn't cut it for Gerling. 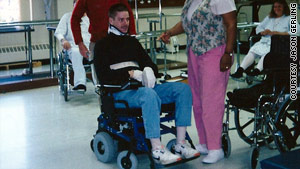 Gerling, who was an accomplished drummer, was paralyzed from the neck down.

So he invented a system that allows him to trigger a bass drum sound while continuing to play the snares, cymbals, and the rest of the drum set.

Gerling uses a mouthpiece trigger provided to him by Origin Instruments, a company with a line of products aimed at helping people with disabilities -- particularly quadriplegics -- operate computers.

Gerling rigged the mouthpiece to control tiny rubber sensors under each cymbal. Anytime he sucks on the mouthpiece while simultaneously hitting one of the cymbals, a bass drum noise is triggered from a small subwoofer situated directly inside the bass drum casing.

He can move the sensors under any of part of the drum set.

"This is over 10 years in the making," he said, smiling behind his state-of-the-art drum set.

Despite his hard work, Gerling said he has no desire to patent his invention.

"If people want to know how to build their own triggers, then, by golly, they can just contact me," he said. "I'll give them the information for free. Encouragement shouldn't come at a price." 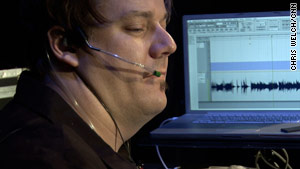 Today, Gerling uses a mouthpiece to trigger the drums that he cannot control with his legs.

One glance at Gerling's Facebook inbox reveals a worldwide fan base many of whom are exactly that: encouraged.

He reads over one letter from someone who had their legs amputated last year: "Thanks for being my inspiration."

Another one reads, "I'm back playing rock and roll, using some of your techniques. Thanks for being my inspiration."

Another fan writes, "Thanks for your effort in helping change the paradigm in the music industry."

That particular "thank you" note is special for Gerling. Getting the music industry to include more disabled musicians -- to look "between the wheels" of his wheelchair as he puts it -- is exactly what he aims to do.

"There's so many musicians who are disabled who don't get the chance to play live," he said. "So I want to tell them to knock on doors and encourage the music industry to be willing to hire a person with a disability."

And he seems to be on his way.

On April 28, Gerling debuted his mouthpiece technology -- accompanied digitally by music he composed himself --- for the very first time during a private event at Minneapolis' famous Guthrie Theatre.

To him, it was his first step to getting back on the road, doing what he loves more than anything, and at the same time urging others in similar situations to pursue their dreams and change the world.

Not surprisingly, the evening was capped off with a standing ovation.

Now that he's made his invention public, Gerling said he plans to show others how to create the technology through "innovative drumming clinics" that could grow into a music tour with other artists.

"People need encouragement," Gerling said, "and if I can be in the position to help someone else, that's just an honor you can't take lightly."